Dimitri Vegas & Like Mike are bringing home the ,madness for a 3rd time. So it only seems suitable that they have had to add a third ‘Bringing The Madness 3.0’ show after they managed to sell 40,000 tickets in 40 minutes. Undoubtedly one of the quickest sell-outs for a single electronic artist, ever.

Having been forced to release extra tickets, the Belgian duo’s recent statistics are implying big things at this DJ Mag Top100 are a possibility. Set for 18th and 19th of December at Antwerp’s legendary Sportpaleis, Dimitri Vegas & Like Mike’s popularity at home is as intense as it is within the global festivals they headline. Whether Tomorrowland, Ibiza or Creamfields, the pairs ability to ignite tens of thousands of people at once is no small feat.

With the record sales coming in the wake of their 6 week reign at Number 1 in the Belgian charts for their collaboration with Ne-Yo, “Higher Place”, the inclusion of another chart topper, Lost Frequencies to events roster will only excite fans even more.

Just in time for Christmas, we have sneaking suspicion tickets will be featuring as a early present for many. Either way, it’s sure to be the maddest ‘Bringing The Madness’ there has ever been. Especially with Tomorrowland presenting it. 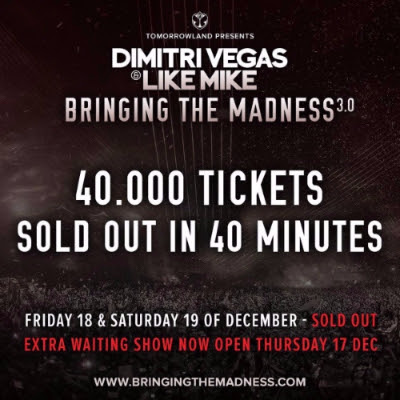