Revealed Recordings is an established name within the industry. Led by Hardwell, its frequent number of big, charting hits and scene A-listers have caused it to carry quite a reputation for some of the best music the scene has to offer.

Pairing up with Mega Hits Radio, the label is set to curate New Years Eve for Lisbon and Porto at the end of the year. This coming hot off the heels of Revealed Recordings Asian tour which saw 5 of the imprints talents bring high-octane dance music to the continent. Which makes the line-up for the two events even more exciting.

Bringing 7 of the imprints hottest artists, New Years in Portugal looks like the place to be on December 31st, destined to kick 2016 in the way possible and round of what has been a pretty incredible 2015 for the electronic dance music industry. Bringing Dannic, Sick Individuals, Julian Calor, Joey Dale, Tom & Jame, Thomas Newson and Manse the level of groove electro, progressive house, bass and melody is guaranteed to be of the highest caliber.

The exclusive Mega Hits Revealed New Years Eve Party will one hell of a way to bring in the new year, with the Revealed Recordings all-stars providing the ultimate main-stage sound and top-tier entertainment. Promised to all be alongside confetti and bubbles, your senses will undoubtedly be at an all time high. Make sure you don’t miss out, grab your coveted ticket and get ready to party into a whole new chapter.
Get your tickets today! 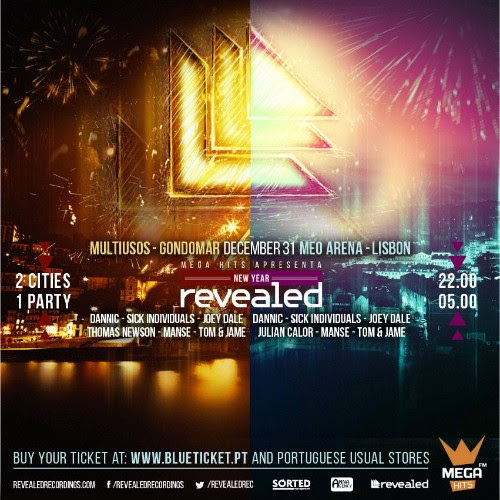