Just as Ultra Music Festival’s first day was around the corner, the folks behind the Miami festival had different ideas. The idea to add some new artists to the line-up. The question, of course, remains as to who was added to the already filled till the neck roster?

Well, although the changes are much more than welcomed, it would be fair to say that a few observers and even those attending are surely in for a treat as the Miami based festival is set to add the likes of American rapper A$AP Ferg, Australian band Bag Raiders and Sid from Slipknot. For contemporary outlets, Ferg’s addition is not as unusual as compared to the latter two artists. But it is hardly any surprise that the Australian band Bag Raiders, whose 2009 track ‘Shooting Stars‘ rose in fame beyond expectations as a meme in the latter half of 2016, and Grammy-award winning Metal band Slipknot member Sid Wilson, who is part of the band as the turntablist and also performs as a DJ under the moniker of Ratboy or DJ Starscream, should be added to the list since both are respectable artists in their own sphere and Ultra’s 2017 line-up has shown to make some exceptional additions to their roster with the likes of Justice and Prodigy making a major come back to the big stage. 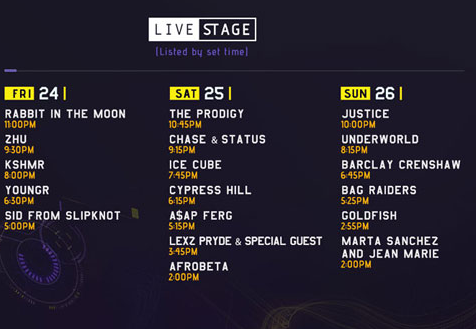