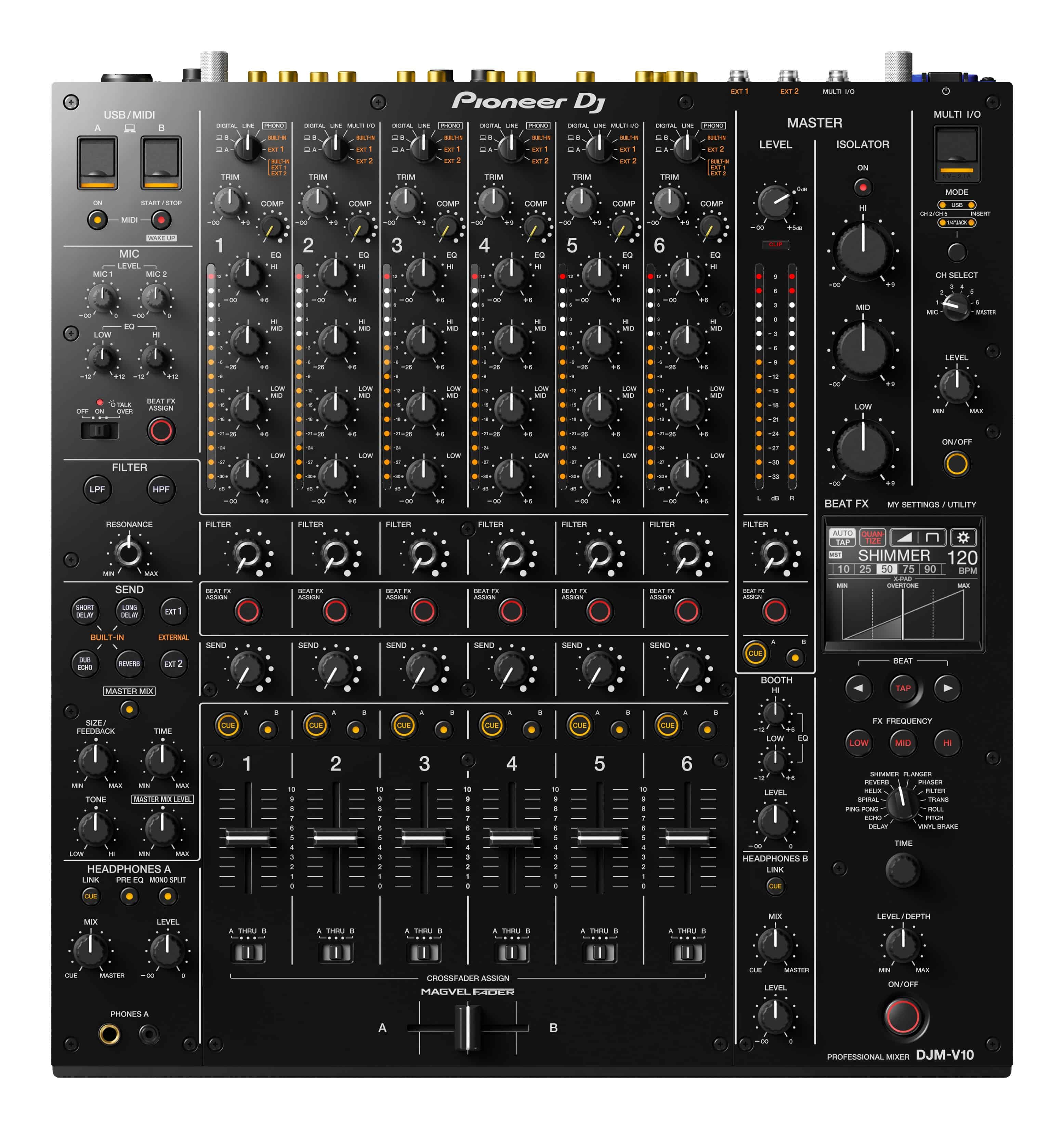 Pioneer introduce DJM-V10: A product to kill off the competition

When it comes to flagship DJ gear as used by the world’s pros, there’s one name that stands above them all – Pioneer. Go into any DJ booth from the one in your local dive club to the mainstage at the world’s biggest festivals, and you’ll likely see a pair (or two) of CDJ2000NXS2s and a DJM900 mixer. But while Pioneer may stand tall, they don’t stand alone. For a fair few of the world’s finest, the likes of Allen & Heath and their flagship Xone mixers are the order of the day. The Xone 96, and Xone 92 before it, are particularly common among the techno and house crowd, with 4-band EQ, analogue circuitry, a full-metal chassis, and deeper warmer filters offering something the DJM line has never quite managed. For some the requirements are even higher, as the bespoke A&H-built Model One, designed by Ritchie Hawtin and used by the likes of Carl Cox, Joris Voorn, and Nicole Moudaber, is the only option that matches their needs. Enter the brand new Pioneer DJM-V10.Introduced to much aplomb last week, it’s quickly clear where Pioneer is going with this one, and the market they’re trying to capture. 6-channels, 4-band EQ, booth and master EQ, dual-headphone sections, beefed up filters, and per channel sends – all familiar to Allen & Heath users and something many staunch Pioneer DJs have been begging the company to introduce for a while. This is combined with the usual Pioneer favourites, including per-channel filters and Beat FX, full Link capability and compatibility with the likes of Rekordbox, Serato, and Traktor, and of course controls and a layout that will let any Pioneer veteran easily transition to the unit without any issues. There are even new features that are unique to the DJM v10, including a “compressor” control on each channel, and something interesting called ShowKontrol, which allows LDs and VJs to see the position of each knob and fader on the unit, which Pioneer say should help them stay up to date with what the DJ is doing on stage while they’re stuck in the FoH booth.

There are of course some unanswered questions, and we’re hoping to get our hands on a demonstration unit to more accurately answer them. In terms of signal chain, Pioneer promise “studio quality” 64-bit mixing, with 32-bit A/D converters, and a “low-jitter” clock circuit. Of course, unlike top-end gear from some other manufacturers, this is still digital and not full analogue. Of course, many sound engineers often comment just how much “better” an analogue mixer sounds when you plug one in after a DJM unit, but in most people’s experience the difference is negligible, and it’s almost a guarantee that no-one in a busy club would ever be able to guess the difference. Most analogue mixers are of course built like tanks and are known to last for decades rather than mere years, even in heavy club use, but until we see it in person, it remains to be seen whether Pioneer have upgraded the DJM-V10 in comparison to the DJM 900 units. And while we’re on the analogue vs digital argument, it’s worth noting that while this is digital and the Xone 96 is analogue, the 96 does feature dual 24-channel 96khz soundcards for a wealth of connectivity options – the full spectrum of analogue and digital combined. The DJM-V10 does of course have Link capability with the most common DJ software, but how customisable this is will again have to wait until we’ve got our hands on one.

So it’s clear the mixer offers an immense and massively welcome array of features, and it’s also clear where they’re aiming it in the market, but the biggest question we’re left asking is – why, and how will they succeed in this corner of the market?

Of course, for Pioneer loyalists who want to finally experience the features that so many techno and house DJs can’t do without, this seems like the obvious choice. A massive selling point is also Pioneer’s familiar and immensely usable built-in FX, for many DJs a total deal-breaker that makes or breaks a potential purchase. But you do have to question whether a DJ loyal to similar existing mixer user would cross over to the DJM-V10, and more importantly, how many DJs would upgrade to one over the alternatives. There is of course something that makes a massive difference to all but the big-earners, and that’s price. Unfortunately it’s also the elephant in the room – it’s $3,200 or £2,800. That’s over double the price of a Xone 96, and you really do have to ask what you’re paying the extra money for. More importantly, it’s only £200 cheaper than a Model 1, a mixer that is often out of the range of most DJs, though this largely stems from lack of availability.

Of course, aside from the question marks about quality and compatibility raised above, there is the biggest question of all – usability. This doesn’t just stem from whether the mixer works well and is intuatively usable. When the lights are down and night is in full-swing, how well the DJ can use their mixer not just as a tool, but as a musical instrument, is what really matters. Of course, this doesn’t stem from a purely technical and design perspective – any DJ worth their salt will be able to switch brands within a few hours practice. But it’s the brand loyalty that will win it for the DJM-V10, and it’s already clear from the online response that the price and availability of competitors for a lower price point isn’t even being regarded. The big seller will be if the DJM-V10 ticks all the boxes like their previous flagship models. Assuming that’s the case, then the question of why the unit exists, especially at such a price point, should become abundantly clear. We’ll certainly let you know as soon we can.