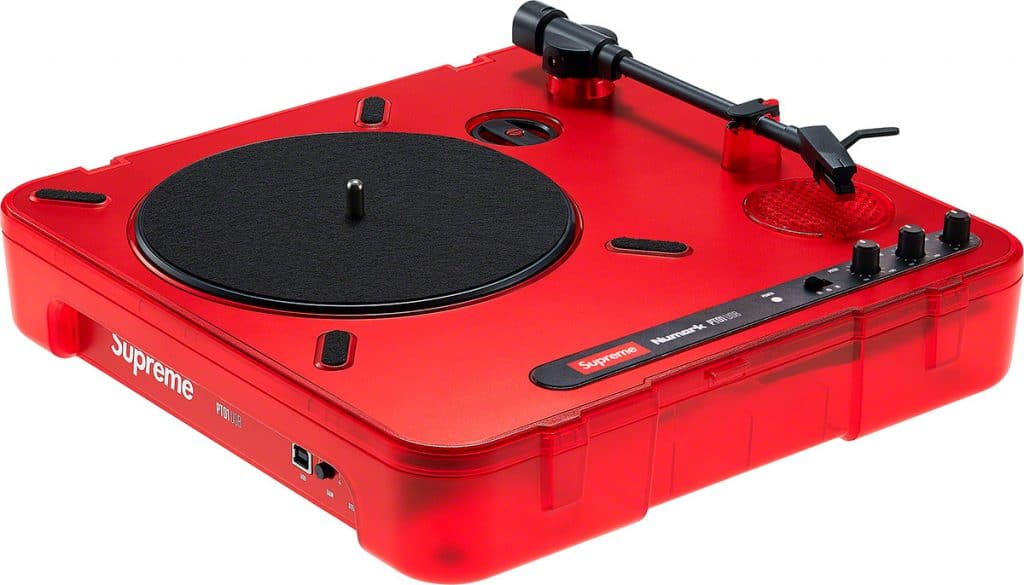 Numark team up with Supreme for turntable launch

For well over 40 years now, Numark have managed to find the perfect balance between the needs of DJ’s and cutting-edge technology, which has helped them to create forward-thinking products. They’ve been the brain behind a handful of world first products – such as the world’s first mixer with a built-in sampler and the world’s first dual-well CD player – and its their innovation that has kept them at the very top for so long. Always keeping a finger on the pulse, they adapt their products and designs with the ever-changing DJ world and now they’ve gone in a unique direction (to say the least), and partnered up with ‘hypebeast’ brand Supreme.

Everyone knows what Supreme is about, but just in case you don’t, it’s an American skateboarding shop and clothing brand founded in New York City. It’s known for being highly in-demand, and also known for having wacky collaborations (having just announced one with cookie brand Oreo) and random products – Supreme incense burner, anyone? Now, the two brands are taking it a step further and have come together to create the Supreme/Numark PT01 Portable Turntable. Of course, the iconic red and white colouring and text of the logo is plastered all over the turntable.

It features a built-in speaker and headphone outputs for maximum portability and the 12 x 12 dimension means it’s small enough to fit in a bag, case or record crate to take on your travels. There’s been a normal, non-hypebeast version of this PT01 released by Numark before, but the discontinuation on the website means that this product will be in high-demand, and mixed in with the avid Supreme fans it means that this won’t be available for long at all. It dropped on February 20 in stores as part of Supreme’s spring/summer launch, and you can check it out on their website here.