Beyond Wonderland & The Gorge postponed until 2021

Popular US festivals Beyond Wonderland SoCal and The Gorge have officially been cancelled until 2021.

Over the past few months we have, unfortunately, become accustomed to festival cancellations and postponements and it appears Insomniac’s events Beyond Wonderland and The Gorge are not to go ahead until next year. SoCal had already been postponed this year due to the ongoing coronavirus pandemic and was to take place in mid-late June. However the brains behind Insomniac’s biggest events had considered it best to cancel it in addition to the The Gorge which was supposed to take place the week before.

To avoid chaos in the aftermath of the news, Insomniac have drafted up two plans for current ticket holders who may be wondering what to do with their purchases. As well as the ability to request a refund up until the 31st May, they have proposed that you can keep your ticket as valid entrance for the same events in 2021, upgrading your existing ticket from GA to a GA+ pass.

Beyond Wonderland SoCal was to see 70,000 in attendance to watch acts such as Tiësto, Valentino Khan and Diplo while The Gorge edition was to invite the likes of Alesso and The Chainsmokers as headliners.

With both festivals falling victim to COVID-19 precautions, we wonder how much longer this will go on for and how many other events are yet to suffer the same fate. Different venues and event companies around the world are taking different approaches to business in response to government advice; in the past week or so we have seen clubs and venues re-open in South Korea, yet in the Netherlands, they are suggesting that large-scale events won’t go ahead until a vaccine is made available.

Although these may be disorientating and confusing times, we can only hope that things return to normal as soon and as safely as possible and that events like Beyond Wonderland and The Gorge edition can thrive once again soon.

Check out Insomnia’s statement regarding the cancelation of Beyond Wonderland SoCal 2020 below! 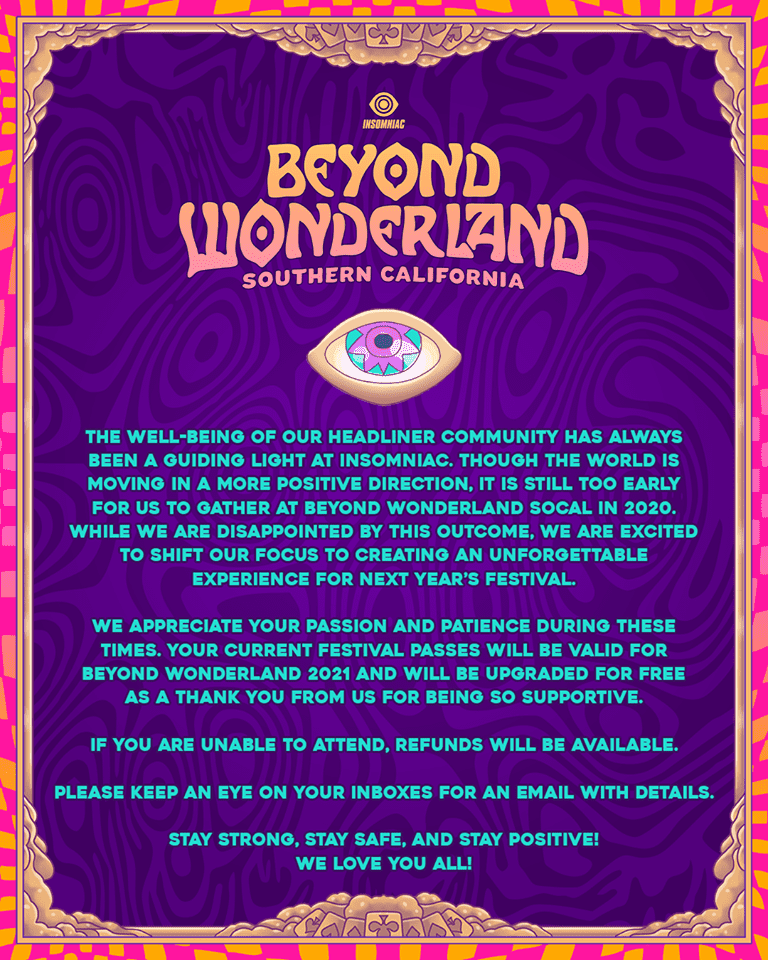