As we celebrate the birthday of one of the biggest stars in the music world, Avicii, we also look back upon the legacy that his career was (and still continues to be) today. Tim Bergling would’ve been 31 years old today, and here at We Rave You we want to honour him in the best way possible: by highlighting some of the biggest career-defining moments of his life.

The release of ‘Seek Bromance’

Although the original track wasn’t under the Avicii name but the Tim Berg moniker, ‘Seek Bromance’ was one of the biggest hits ever when it came out in 2010, way before ‘Levels’ or ‘Wake Me Up’. One of the tracks that put him on the map as a recognised name, it peaked at number 1 in multiple countries, and was within the top 5 on countless charts all around the world and you couldn’t go anywhere without hearing it during that point in 2010. One of the most iconic progressive house tracks to exist, it was up from there.

The release of ‘Levels’

Of course, it wouldn’t be an Avicii career-defining list without mentioning the release of ‘Levels’ back in 2011. The Swedish music awards Grammis gave it the title of song of the year, and it was then when he saw his career take a turn that no one (not even him) could have anticipated. Avicii himself had even said that he never intended for the track to become famous and was amazed at the popularity it received. Recognised by many critics and fans to be one of the greatest EDM tracks of all time, the legacy of ‘Levels’ will never be beaten.

When compiling a list of iconic performances from Tim’s career, this one will always come within the top three. It’s not everyday where you can get one of the biggest pop stars on the planet, Madonna, to open up your set for you and introduce your headline set to the crowd but that’s exactly what happened. Not bad for his first time headlining Ultra, right?

The debut of ‘Wake Me Up’

Heading back to Ultra Miami again, this time in 2013, this set was also very iconic for a particular reason: it was the first time the world heard ‘Wake Me Up’. The feel of the track was quite different, and famously the audience didn’t have a great reaction to it but they were completely wrong when it became another one of his biggest hits ever. Bringing out singer Aloe Blacc for the debut performance three months prior to the track’s release, he said that the performance felt ‘awkward’, but Tim had faith that everyone would understand it when it came out – and he was totally right.

To help fight child trafficking, Tim sent out a very powerful message with the music videos for ‘For a Better Day’ and ‘Pure Grinding’, and they became the first time he directed for a video. The videos were quite graphic but powerful against the music, and he said this about them: “It’s an issue about which I hope to start a louder discussion, especially now with the huge number of families on the move from war-torn countries looking for safety and shelter.”. 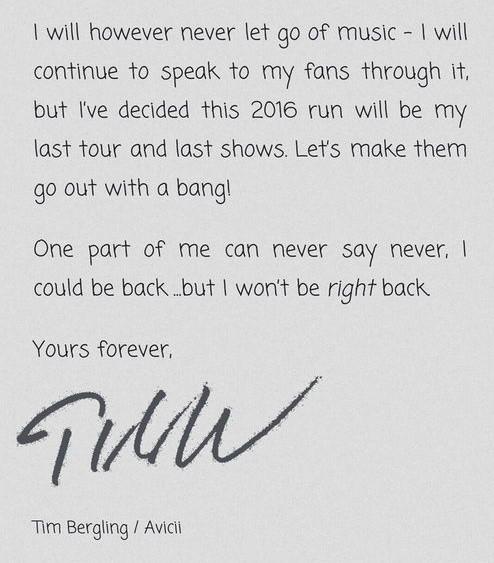 By now, everyone had seen that Avicii had become one the hardest working DJs on the face of the earth. The amount of shows he was doing throughout the year was a monstrous amount, and sadly it all became too much for him and on March 29 2016, he officially announced his retirement from touring and playing shows.

Taking to the iconic Ibiza venue of Ushuaïa where he had previously held a five-year residency, Tim performed his very last show. Playing on that stage for just over two hours, he opened up with the Sandro Cavazza collaboration ‘Without You’, and there was no dry eye in the house when ‘Levels’ was performed for the last time ever. Although the full show is not online, there’s clips above and the setlist is here.

On October 26, 2017, fans got to see the most raw and real look into the life of the superstar DJ when ‘Avicii: True Stories’ was released. Detailing his struggle with the pressure put on him to perform many shows in such a short time – the pressure that ultimately hospitalised him – it makes for a hard but necessary watch. Showing the essential moments such as meeting Madonna, creating some very famous hits and ultimately deciding to retire, it shows all the ups and downs that he went through. If you’re in the UK, you can watch the documentary on BBC iPlayer.

Of course, there are many, many more moments to include in this list, but it’s simply impossible to include every one. Tim lead an extraordinary life that was fuelled by his career, and we will forever be thankful to him and the legacy that he created. Helping to bring EDM into the mainstream, we will never forget him. Happy birthday Tim Bergling.