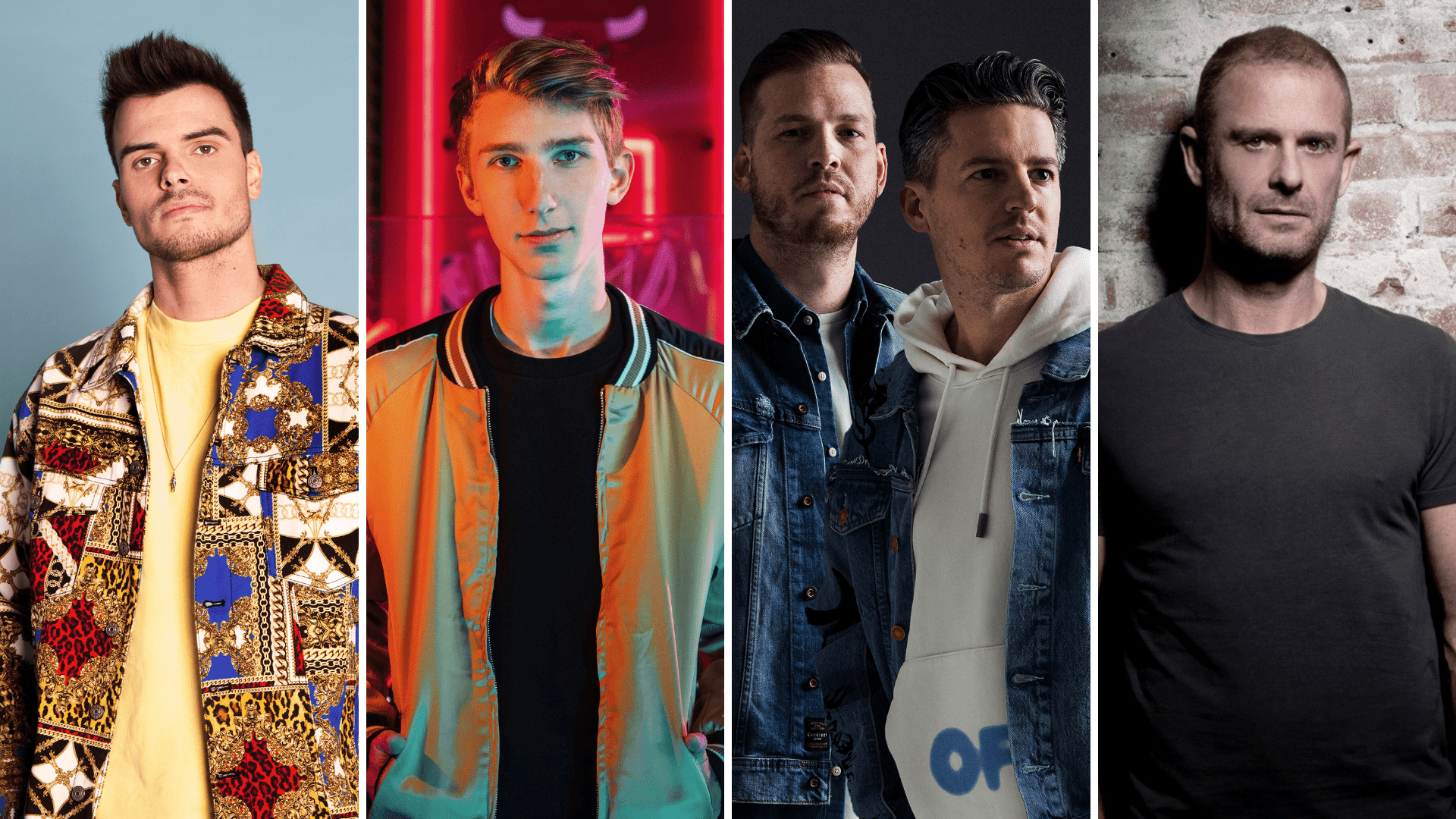 As we revealed yesterday, We Rave You has teamed up with long running legendary company Koolwaters to celebrate their 20th anniversary in style. Although it’s true that we still cannot host in person events yet, that hasn’t stopped the team from creating something special. To celebrate a massive milestone, in conjunction with Amsterdam Dance Event, they have invited a host of brilliant Dutch acts to come together for a special live streamed event. The line-up is truly spectacular, and we got each artist on the bill together to gather their thoughts about the event and to see what they’ve been up to during this pandemic.

Kicking off the first day of the Koolwaters anniversary event, this Dutch act is a force to be reckoned with. Traversing across multiple different genres, there is simply nothing SWACQ cannot do.

How has quarantine been treating you? What have you been getting up to with the lack of touring?

Quarantine has been treating me good, never been so creative. I’ve worked on so much new music and also tried experimenting with new stuff. I miss touring but to be honest I think COVID-19 put me in a stronger position, since we’re all sitting at home and we have so much free time on our hands, we can drop track after track. Those who make the most noise will stand strong once everything opens up again. At least that’s what I believe!

How does it feel to be opening up the Koolwaters ADE event? What can fans expect from your set?

I’m honoured to be part of Koolwaters 20th Anniversary. I’ve prepared a set with some of my favourite tracks at the moment, some of my latest stuff and of course ID’s! Can’t wait to play them for you!

Known as a legend in the trance scene, Richard Durand’s career spans across multiple years of brilliant hits and massive achievements. Performing at events such as A State Of Trance, he is one of the most prolific acts in the trance community.

What have you been doing to keep busy during a time where no one can tour?

At the moment i’m re-painting my house! But also i’ve been working on lots of new productions in my studio, some of which i’ll feature in my live stream set.

Do you approach livestreamed sets differently than in-person sets?

Yes, I do, I love to play 90% of my own tracks as I see livestream events as more of a showcase experience as there’s no live dancefloor to read reactions and shape the direction of the set with. But I like to throw in a few surprises such as new tracks.

Firebeatz has grown to become one of the most loved duos in the electronic music scene. Made up of Tim Benjamin Smulders and Jurre van Doeselaar, they are regulars on Spinnin’ Records and their tracks have ranked up millions of streams.

As a duo, you two have been creating lots of music and releasing a steady stream of singles throughout the pandemic. Has it been any different to create during the pandemic?

It’s a bit different since we’re not able to test our club tunes on the dancefloor and see how the people react. We’re focusing a bit more on real house songs instead of club bangers.

How excited are you to be opening the second day of the Koolwaters event? What can we expect from your set?

We’re looking forward to this event, we saw some moodboards and the production will be great! We will play a lot of our new music and will premiere our new single.

Gaining recognition after a monster collaboration with Martin Garrix, Mesto has become known for his energetic house productions. Blowing up right now, his name is hot on everyone’s lips and his insane skills shine through in his productions.

Is there any new tracks or projects that you’re working on that you can tell us a bit about?

I’m working on a lot of new music, since there’s so much time for that now. I’ve been trying to challenge myself to see what I can do outside the tracks i’ve been releasing till now, which gave some cool interesting results! Also i’m working on a follow up of my collab with Oliver Heldens with him, and i’ve been working on a song with someone who I collabed with two times… I can’t tell who but let’s hope it will see the light one day. I’ve been working on some older projects as well i’ve been playing live for the past few years, I tried to put them in a new jacket. We’re planning on releasing those in the near future as well!

Do you think livestreamed sets like this Koolwaters event will continue when the world is back to normal?

Let’s hope so! Obviously I miss doing real shows so much, since there’s a real connection you can feel with the crowd. What Koolwaters did with this livestream is from another level and insane what they can do with technology these days. It gives me a good feeling to know that people are watching the livestream as it happens, because now I can fully live in the moment and it doesn’t really feel like ‘pretending’ to do a show.

We also spoke to Marc Azevedo, who has played a massive part in the success of Koolwaters, building the brand up since its inauguration in 2000.

As managing director of Koolwaters, what plans do you have for the brand to grow and expand in these coming years?

We have big ambitions for the brand in the coming years. We want to continue putting on events in the UK like we have done in previous years, with a combination of established names in the scene and new up and coming artists. Last year we didn’t run as many Koolwaters events as usual, mainly down to the expansion of our agency side, which has seen our roster grow to 60 artists and organise more than 1500 events globally in 2019. We have also been heavily involved with brands like Budweiser, Heineken helping them curate Festivals and other projects with top talent from our roster and some of the biggest artists in the scene right now. Our global partnership with Spinnin’ Records/ Warner music to expand their LIVE events side has been an exciting 2 years so far, helping to push the artists signed to the label by creating events for them to showcase their music and new releases and the goal is to hit 100+ shows in 2021 with Spinnin’, but this all depends on how the pandemic situation develops.

The brand is hitting its 20th anniversary already, what do you think has contributed to the brand’s big success over the years?

There are many factors that have helped our longevity in the industry, I think one of the key ones is always looking ahead at trends and how we can innovate our events and the business. Since the very beginning we have always embraced all music genres from trance, techno, house, breaks, deep house, happy hardcore and our events always had two rooms to offer ravers a choice, that has keep people coming to our parties for decades. We now have multiple artists across all genres of the electronic music spectrum playing all types of events. Our 20th Anniversary event is a good example of what can be done with modern technology and innovation, we are creating something never seen before and bringing it to a worldwide audience. Another important factor to our longevity is the multiple markets we have worked in since the beginning of the brand, in the UK we have run events in 62 different towns and cities and across the world we have run parties in every corner of the planet, held residencies at iconic clubs such as Eden and Bora Bora Beach Club. This approach has meant we have been able to adapt to trends and changes in the scene with more flexibility as we are not reliant on just one market. Our expansion into the Chinese market over the past 10 years has really helped push Koolwaters to the forefront of the music industry as many people rely on us to open up this key market for them and I think our attention to detail doesn’t go unnoticed. I believe its our 360 approach to the industry that gives us an edge, we have experienced the industry from all angles – brand, promoter, DJ/artist, artist management and agency which means we have a deeper understanding of all levels and the necessary skills required to navigate to success. We have a dedicated team with years of expertise and we are driven to leave a legacy in the music industry.

Make sure to join the event page on Facebook here, and get ready for two nights of brilliant entertainment!