After the prolonged silence of the Swedish trio, the latest revelations revive some emotion about possible releases. Mike Posner has just revealed on social media that the voice on the unreleased track ‘Underneath it All‘ is his.

Remember the great return of Swedish House Mafia at the Ultra Music Festival in 2018? For all those who testified Axwell, Steve Angello and Sebastian Ingrosso return on stage, it was a memorable event. They gave to the thousands of fans the energy we know so well and presented themselves with a megalomaniac stage worthy of a pyrotechnic festival, as only they can do.  After the festival, an explosive tour followed. From the many high points of their comeback, it is worth noting the moment when the new tracks of the EDM supergroup sounded in Stockholm, in 2019. What a rush! One of the unreleased tracks that bombarded the emotions of the fans was ‘Underneath it All’.The hype brought by the fresh track stayed on for a long time and in August of last year, we were sure that a release would happen. A mysterious post full of suspense made us understand what the cover art of the trio’s new track could be, as the subtitle was ‘Underneath it All’. What it was, we don’t know, what we do know is that 14 months later we are still waiting for news from the boys.

A couple of days ago, in a response to a comment in Instagram, Mike Posner took over as the singer of the track’s vocals. Really? Maybe because the voice seems to be different from Posner’s or because we had created the illusion that, like ‘Don’t You Worry Child’, the voice would be John Martin‘s, the news was received with surprise. 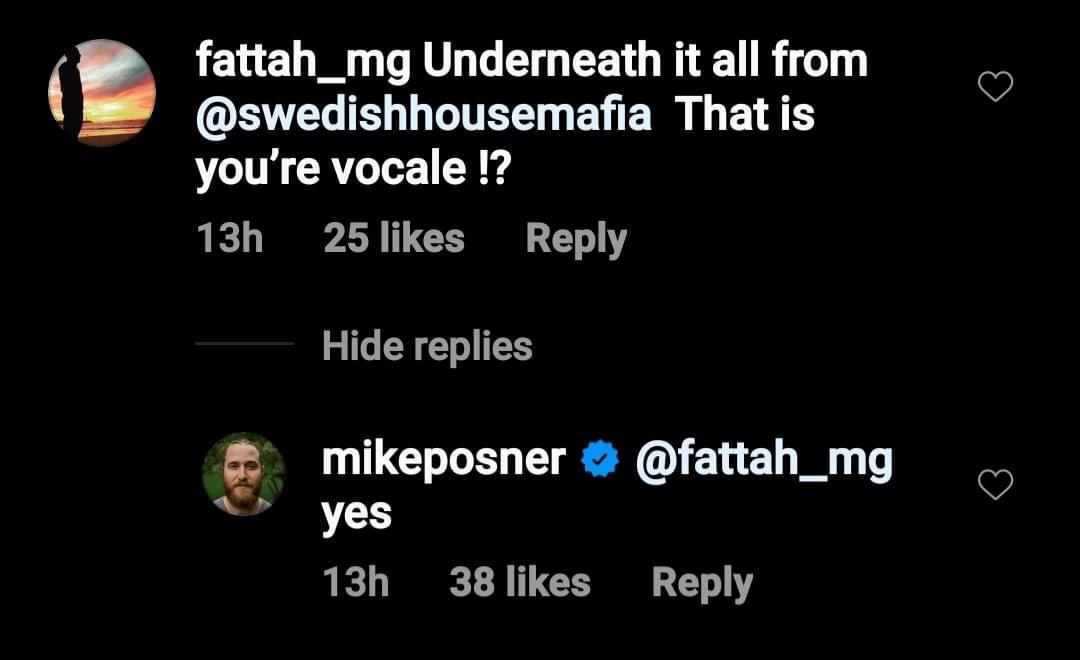 Swedish House Mafia has been very quiet and there are several questions. How much longer will the unreleased tracks stay alive in the minds of the fans who heard them live so long ago? Is this Mike Posner revelation a teaser for a release? Nobody knows, but this little moment of emotion deserves a “To be continued”. In the meantime you can listen to a live rip of the track here.