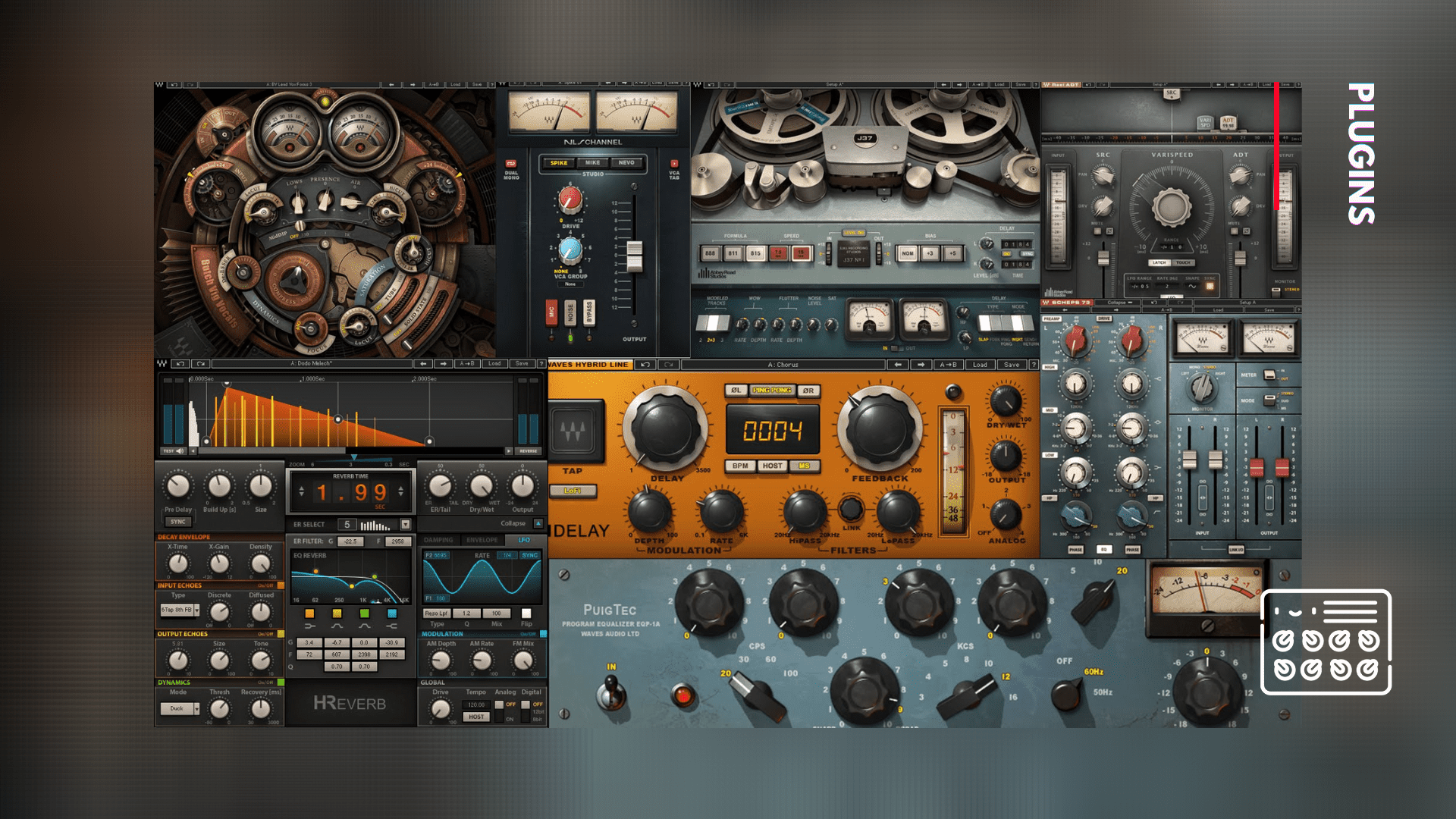 Black Friday has its name for the day following Thanksgiving in the United States of America. The day after Thanksgiving has been regarded as the start of the United States Christmas shopping season. The name Black Friday did not become widely used until the last recent decades. That day is well known for the rush of people into the shops, huge sales, and the ‘everything you can get is free’ one-hour challenge. This became so big that a lot of big companies all around the world also participated in these sales and started to use the name Black Friday. It’s early Black Friday and some of the best music production companies have already started offering discounts and deals on their products. We are here to list the best early Black Friday deals on VST plugins for music production for you! Also do check out our special page where we highlight the best deals on presets, bundles, sample packs, courses, etc for Black Friday 2021.

Plugin Manufacturer Output known for its creative and unique plugins like Substance, Portal & Thermal has already started off with their major Black Friday deals. Offered in the collection is a set of synthesizers, distortion, and granular plugins along with a few other Kontakt instruments. To read an in-depth review of the plugins offered in Output’s Black Friday deals read here and down below are the links to our top picks from their complete list of offers and discounts.

Soundtoys 5 plugins are some of the most creative effects plugin out there. The bundle comes in with all 21 Sountoys Plugins including award-winning plugins like Decapitator(Distortion/Saturation), Echo-Boy(delay), Little AlterBoy(Vocal FX), Crystallizer(creative echo) etc. The plugins do have their own individual sale going as well however we heavily recommend getting the complete bundle catering to the immense creativity you will expose yourself after grabbing them. You can check the plugins in action down below and make sure to grab the deal before it ends.

iZotope is one of the leading plugin manufacturers in the world when it comes to mixing and mastering plugins. You will find plugins like iZotope Ozone, RX 8, Vocal Synth 2, Neoverb in almost every professional music producer’s toolbox. The recently released Neoverb is probably one of the best reverb plugins out there because of the fact that it listens to your music and algorithmically creates a reverb setting suitable for your music adding the much required unique touch to your tracks. The music production suite 4 includes 13 plugins and is available at 50% off for a limited time. Definitely a high rated bundle on our ‘Early Black Friday Deals on plugins’ list.

Sonnox is known for the development of high standard plugins for mixing and mastering. The award-winning Oxford Plugins are used by professionals worldwide for mixing Music, Film, Television, Radio, and Live Sound. This Broadcast FX Bundle is a collection of the most powerful Oxford plugins at the moment providing high-quality processing and precision controls in any field. This bundle contains the following plugins such as the renowned Oxford EQ and Dynamics plugins, the popular Inflator for maximizing loudness, the Oxford Limiter, and the SuprEsser for fixing problematic frequencies. Check out the limited time offer by clicking the button down below.

Baby Audio is currently offering 60% off on its all plugins bundle. All 4 plugins in the bundle are very easy to use and serve the purpose perfectly. The 4 plugins are:

Parallel Aggressor and I Heart NY are quite useful when you want to achieve a fat and punchy mix whereas Comeback Kid and Super VHS are creative FX plugins. Check out the demo of one of the plugins included in the deal, Parallel Aggressor down below.

Adding distortion, compression, EQ adjustments are all production processing tools to make your production sound better. This bundle is specially made for audio post-production including the award-winning Sonnox Restore suite which features the DeClicker, DeBuzzer, and DeNoiser, Oxford EQ, Oxford Reverb, Limiter, and SuprEsser dynamic EQ. In a total of 8 plugins whereas you buy it now you will get the Ozone 9 Elements, Neutron 3 Elements, and the Nectar Elements processor for FREE.

Waves Audio combined 83 Sound-grid powered plugins for music production, mixing, and mastering including the Vocal Rider, CLA-2A, CLA-76, Kramer Tape, PuigChild, PuigTec, L2 and L3, H-Delay, and the entire Renaissance series. With this bundle, you can easily start a track at a professional level and end it with the analog sauce on top of your master chain. Tired of your CPU running too high? No worries, this bundle also includes the Soundgrid Proton Server. A compact audio processing unit specially made for running your plugins. This way you can use more plugins as the plugins run through that server and don’t burden your CPU. As a bonus, you get the premium 64-channel version of the SoundGrid Studio and eMotion ST mixer software with this bundle.

Tired of using equalizers affecting the color and integrity of the recording? So do we. This dynamic EQ allows you to make broad adjustments as well as surgical adjustments without taking away too much from the original recording. This non-stoppable EQ lets you space carve every sound and is a must in every producer’s toolset. The features of this monster are out of the ordinary including 5 bands of the EQ curve, band overlapping without phase distortion, band detecting from mono, mid, or side channels, side-chain controls, upwards/downwards compression, and expansion. Take your chance and add this amazing EQ to your mixing arsenal.

BeatSkillz is an audio software company making processing plugins and virtual instruments for the modern-day music producer. This huge collection of Beatskillz contains the most popular virtual instruments based on synths and drum machines for every genre. 10 of the most powerful virtual instruments on the market, talking about the Synthwave Keys, Synthwave Drums, Soultastik Keys, Soultastik Drums, Retro Keys, Retro Hit, Dark KZ, Breakdance Drums, Bollywood Maharaja Drums, and the Bollywood Maharaja Drums 2 plugin. It’s not a problem to lay the foundation of every genre with these plugins whereas if you buy this bundle you will get Ozone 9 Elements, Neutron 3 Elements, and Nectar Elements plugin for FREE.

Mellowmuse has been fine-tuning its craft of audio plugins for producers, sound designers, and musicians for more than 12 years. The ease of use and extraordinary sound quality has always been their main priority as for the first time they combined their best plugins in 1 single bundle. Everything you need for mixing talking about the CP1A Compressor, CP2V Compressor, CP3V Compressor, CS1V Console Channel, EQ1A Equalizer, EQ2V Equalizer, EQ3V Equalizer, IR1A Convolver, LM1V Limiter, SATV Saturator, and the ATA Auto Time Adjuster. The best compressors, equalizers, and mixing tools you could need for your productions are in this bundle.

FL Studio is probably one of the most used DAWs all across the globe. Producers like Martin Garrix, Avicii, Afrojack are some of the producers that have used FL Studio for making music. One standout thing about this DAW is the quality of its native plugins. Plugins such as Edison, GrossBeat, Sytrus are some of the widely recognized plugins among music producers. This Black Friday, Image-Line has built an FL Studio all plugins edition and put this on a big sale. The bundle includes the FL Studio Producer Edition + all additional plugins FL Studio offers. Some of the plugins are Direct Wave, Drumaxx, Edison, Gross Beat, Hardcore, Harmless, Maximus, NewTone, Pitcher, PoiZone, Slicex, Toxic Biohazard, and vocodex. With a total of 23 plugins, this bundle is definitely the one to consider and crowned with 5 stars in our ‘Early Black Friday Deals on plugins’ list.

Read the next article: Last Day of Waves Audio Election Day Sale – Up to 40% off on Plugins