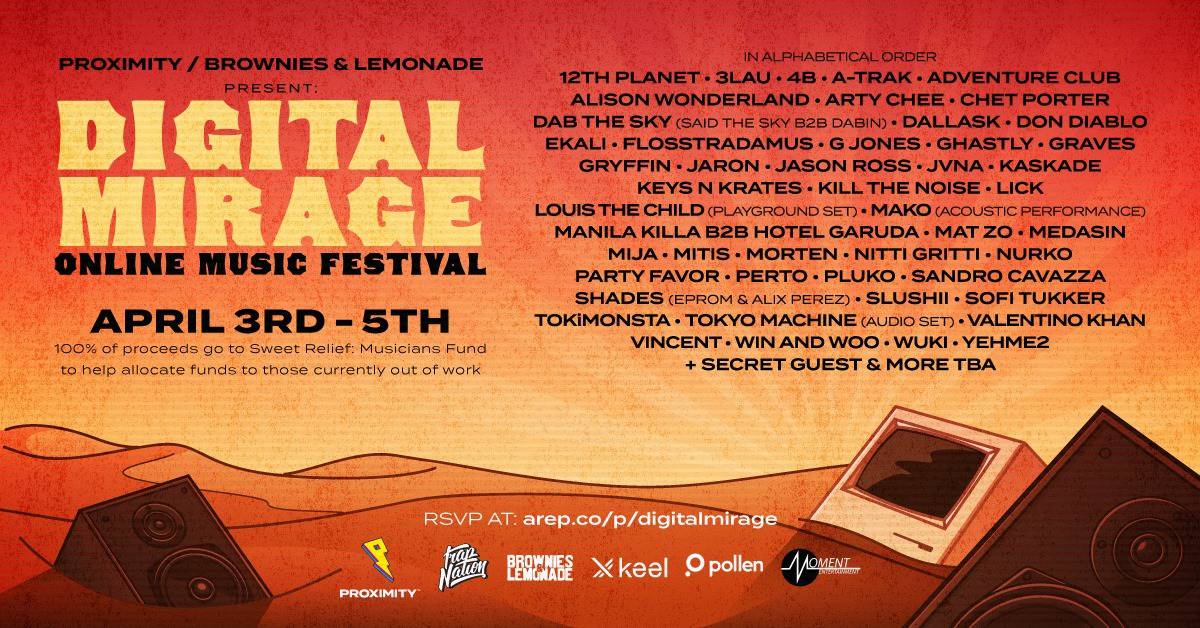 Digital Mirage is widely known across the electronic scene as being one of, if not the first, major virtual festival to happen this year. Its promotors Proximity and Brownies & Lemonade have brought in a wide variety of the biggest and hottest names in the scene right now for two editions. Spanning across many electronic genres, the festival has seen the likes of Oliver Heldens, San Holo, Don Diablo and more curate some insane sets (including the world’s first slow motion and underwater sets performed by San Holo and Chet Porter) and now they’re about to do their third edition for thanksgiving.

Digital Mirage Friendsgiving will take place on November 27 and 28, hosted by Cray and Hannah Rad. With each edition before this, there has been an option for fans to donate money to causes, and this time they’ve chosen the #SaveOurStages movement to donate to. #SaveOurStages is an initiative that is helping to keep vulnerable music venues afloat, protecting the live music industry and its venues.

Of course, the lineup is truly insane just like previous editions, and Proximity and Brownies & Lemonade have gone above and beyond for the ‘Friendsgiving’ season. The names that immediately stand out to us, though, are Tiësto, Benny Benassi, ZHU B2B NGHTMRE and Tchami to name a few. They will definitely be dominating the viewer numbers, but there’s a few smaller names that deserve your attention throughout this mini digital festival. The first one is Slow Magic. Rising to fame with a mysterious masked aura surrounding him, he’s opened for the likes of San Holo and ODESZA and has a big following that is only growing bigger with each track he releases, and his live shows are something like nothing anyone has ever seen before. Laxcity is another one to look out for, and this British producer is rising in the ranks gaining attention from the likes of bitbird and even Justin Bieber himself thanks to one sample he made. Nitti Gritti will no doubt put on the performance of a lifetime. Playing at the likes of EDC Las Vegas among other massive festivals, he gained popularity thanks to his track ‘Lights’ which you have definitely heard at any festival you’ve been to.

With so many amazing producers to explore on this lineup, it can seem overwhelming but thankfully there’s no clashes! Check it out below and RSVP here for the chance to win a PS5 and more.

FEATURING THIS AMAZING COLLECTION OF ARTISTS