Carl Cox, house and techno legend, is supporting a charity stream to help the people of Ibiza through the winter. Ibiza Soul Food is a series of online events presented by Universe to raise funds for Ibiza Food Bank, an aid organization that delivers food to those in urgent need by the hand of more than 250 volunteers. Ibiza Soul Food will be hosted exclusively in Woov, a platform for digital events that provide a virtual venue to enjoy live music. The initiative will be supported by many renewed artists but the premiere is in the hands of King Carl Cox, on December 12. The kick-off will happen on that Saturday (EU and UK only), from 21:00 to 1:00 UTC and the £2.00 from the ticket will go entirely and directly to Ibiza Food Bank. The money raised will be used to purchase coupons for fresh food.

After this devastating year, many places in the world are in deep distress and difficulty. Ibiza is no exception. For the past decades, nightlife, clubbing, the entire entertainment industry have been Ibiza’s bloodstream. However, since the lockdowns of March, all the peons who make the music scene happen are standing still, holding a bar that seems to be crushing them. Bartenders, venue staff, promo teams on the ground, entertainers, hotel receptionists, sound & lighting teams, and many other industry workers have helped created some of the best music events in the world. Now, all of them and the White Isle itself needs everyone’s contribution. This is also the responsibility of all those who have experienced magical moments on the island, and Carl Cox will be the first to set an example:

‘Ibiza has been a 2nd home to me for many years. The island is a breeding ground of creativity, amazing friendships and incredible people. Some of these people now need our help in these turbulent times and I’m super excited to be part of the first Ibiza Soul Food edition.’

The legendary artist was called to action by Universe, organizer of this extraordinary initiative. Alon Shulman, the CEO, shares his enthusiasm to be part of such a noble project:

‘Being asked to help raise awareness and feed families in Ibiza is almost unimaginable which is why we stepped straight in and the first call was to the King, Carl Cox. Hopefully, Coxy’s example will encourage others to get onboard and for people to join in – after all its only £2 for four hours of music.’

Tina Browning, one of the coordinators of the Ibiza Food Bank, is committed to helping the islanders and counts on the support of artists and their fans:

‘We are grateful to Universe and Woov to be able to announce the first in our series of online music events, Ibiza Soul Food and even more excited that one of the first DJ’s to step up to the plate and support us is the mighty Carl Cox alongside Bushwacka, Syreeta and Secret Society’s Mark Greene that are also supporting us.’

Do your part. Find the event website here and get your tickets now. 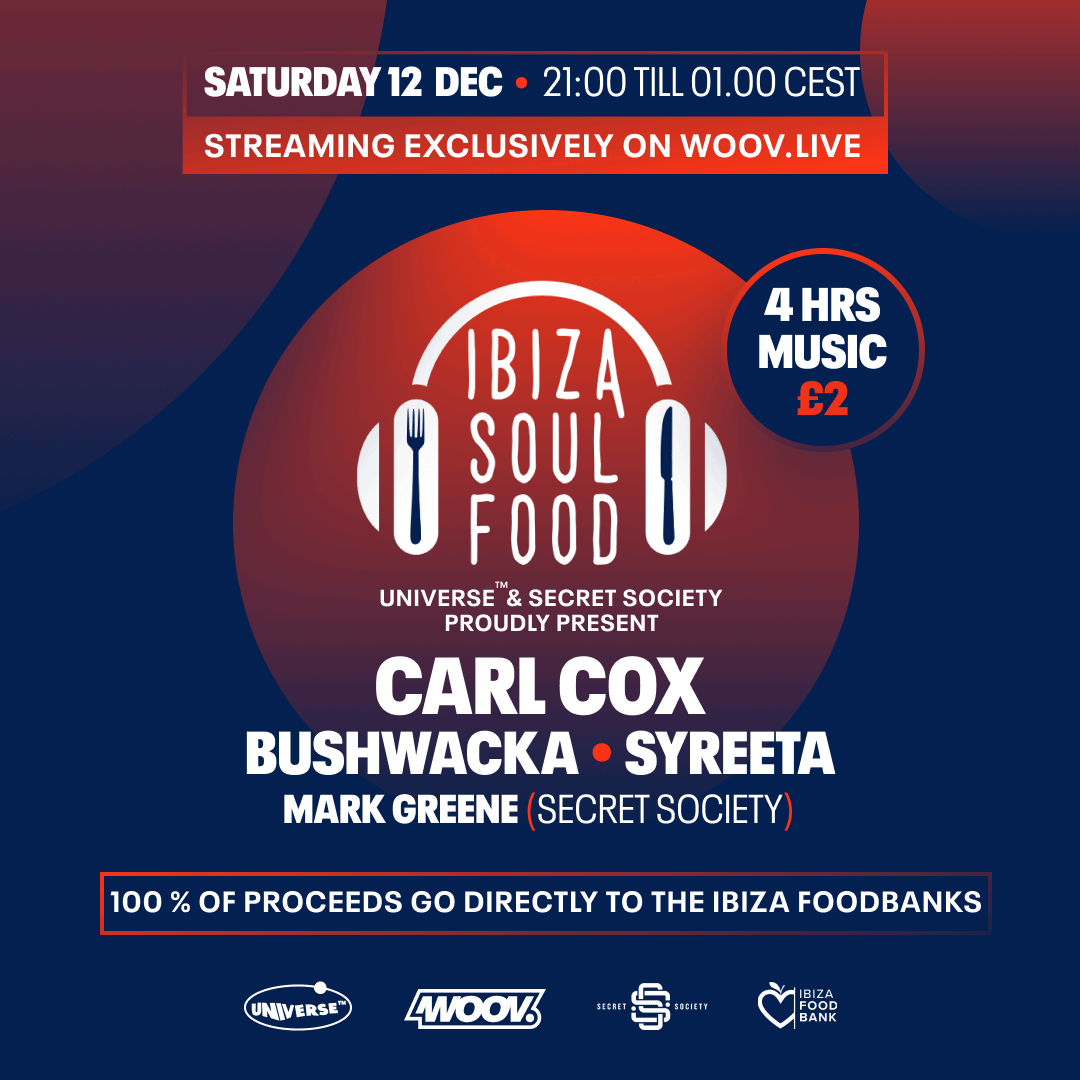