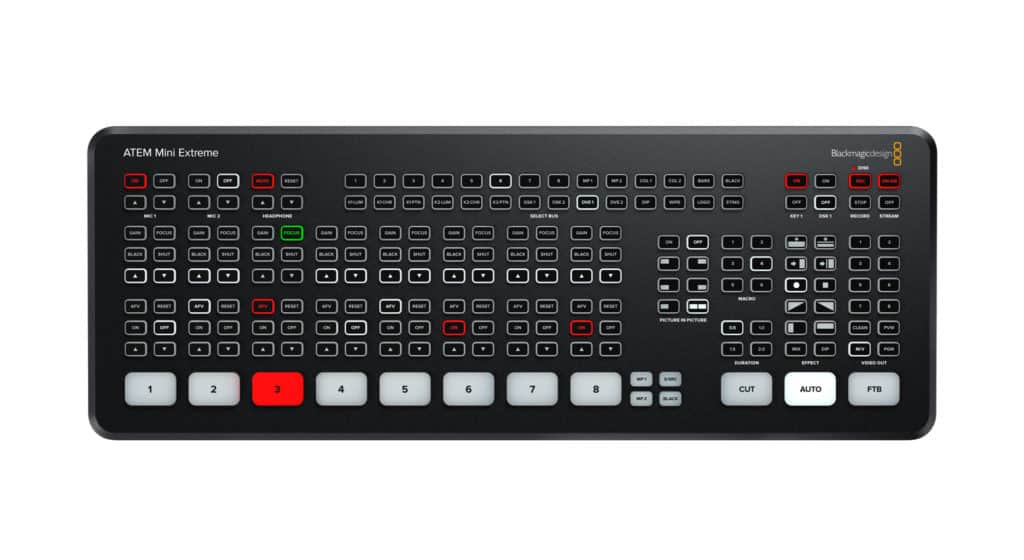 As recently as 10 or so years ago, broadcasting live with multiple cameras seamlessly in full HD was the preserve of a major TV network or broadcasting companies. The equipment involved from cameras, to video switchers, to routing equipment, etc cost hundreds of thousands, if not millions. Since then, single camera shooting whereby video is recorded in multiple takes and edited later, has been revolutionised by advances in video on DSLR cameras, and lately even phone cameras can do a decent job in the right conditions. One decent camera, a computer powerful enough to edit, and you can look like a pro whether you’re making short films or content for Youtube. Yet multi-camera live setups have until very recently been something of a hassle to get working, with an incredibly expensive video switcher still something of a requirement unless you’re willing to do a bodge job. But all that has now changed, and the world of professionally livestreaming your DJ set has become a whole lot easier, thanks to the ATEM Mini Extreme.

Firstly, a bit of background. When Nikon first introduced video recording to their D90 back in 2008, it was somewhat primitive, with just 5 minutes of footage able to be shot at once, with a fairly limited feature set. The Canon 5D Mkii which followed shortly afterward then set the bar, with full HD recording that even saw it creep into use by pro cinematographers. But it was a small Australian company called BlackMagic Design who set the “low budget” cinematography world alight, with cameras such as their Pocket Cinema Camera and later the larger URSA line, offering quality akin to pro cine cameras costing tens of thousands for a fraction of the cost. Their claims were scarcely believed by pros at the time, but they’ve since become a firm fixture for cinematographers wanting a high-end solution without the high-end cost. They also make software such as the DaVinci Resolve editing and grading suite, used by professionals, and available for free.

Enter the ATEM range of video switchers. Beforehand, and we’re talking just a few short years ago, broadcasting multiple cameras at once via a PC wasn’t exactly easy. Software like the highly popular OBS Studio is free, highly professional looking with a bit of tweaking, and much used. But for anything more than a single webcam overlaid on a live stream of a video game, hardware became the issue. Plenty of companies offer solutions allowing you to capture an HD live feed from a camera, either wired capture cards which soon stack up in cost, or notoriously unreliable wireless streaming over networks – DJI for example offer wireless streaming from most of their drone controllers via RTMP servers, but oddly refuse to tell anyone how to get this working. The ATEM line is therefore a low cost solution. Sure, their more basic models don’t exactly have the same level of features as an industry-standard Sony XVS/ICP switcher, but then you don’t need to re-mortgage your house to buy one.

The latest in the ATEM range is the Mini Extreme, which expands on the ATEM Pro’s feature set with eight HDMI inputs over the previous four, two HDMI outputs over the previous one, plus plenty of exiting features such as transition effects, picture in picture,  important individual input controls for each camera, and two additional separate audio feeds. Link the unit up to a PC or laptop with the ATEM Software control panel, and you’ve basically got a full TV studio in your hands, enabling you to overlay graphics, use virtual sets via chroma-keying (green screens), mix audio, and so on. Indeed, the Mini Extreme now allows four separate chroma-keys, meaning you can build up quite a substantial virtual set. Even without a computer, simply hook up a monitor to one of the outputs and some kind of storage device via USB, and you’ve got nearly everything you’d need “in the box” if you’re simply mixing between multiple sources. For slightly more cost, and we believe it’s very much worth it, the Mini Extreme ISO allows the unit to record all eight inputs separately, as well as the main “program” feed. You can then open this later in DaVinci resolve, and all your cuts are there waiting for you, allowing you to “tighten up” any work you did live for later VOD broadcasting or streaming. Of course, the unit also offers the chance to simply stream on major platforms such as Youtube, Facebook Live, or Twitch straight from the unit. No extra equipment involved.

So how much for all this power in a single unit? Well the ATEM Mini Extreme is £769, and the ATEM Mini Extreme ISO is £999. This is quite astounding for two reasons – again, to get the same setup as this even just a few years ago would have costs hundreds of thousands of pounds/dollars, leaving it the reserve of the pros only. Moreover, have a good scout around for similar rival products and…well there aren’t any. Roland, they of synthesiser and drum machine fame, do a fairly decent “prosumer” switcher which does admittedly offer “professional” SDI inputs and more audio options with XLR ins and outs as opposed to the minijacks on the ATEM, but feature wise it isn’t a patch on the ATEM lineup and is over twice as expensive as even the top-end ATEM Mini Extreme ISO. Other than that, you’re looking at high-end-luxury-car type money before you get anything close. BlackMagic really do have the market sewn up here.

In the modern era, especially with the crisis we’re currently living through, live streaming DJ sets is the in thing, and it doesn’t take much get something looking decent. A few webcams, a DSLR, basically anything with an HDMI output (as above, DJI Phantom controllers feature a clean HDMI feed straight out of the controller, an amazing Cercle-esque addition to outdoor streams) and you’re ready to go. But unless you want to muck around with multiple capture cards, video over IP, and other “bodge” solutions that either don’t work or will melt your computer – or indeed are impossible with a laptop – it seems there’s really only one solution, and unlike some tech reviews where “only one solution” is shorthand for “we think this is best”, BlackMagic’s ATEM Mini range, the Extreme ISO in particular, isn’t just the only solution for the cost, it is absolutely fantastic given its feature set, and a potential game-changer for live streaming.

The BlackMagic ATEM Mini Extreme is available for pre-order now, and we’ll be looking to get our hands on one for a more in depth review of how well it works in the real world.