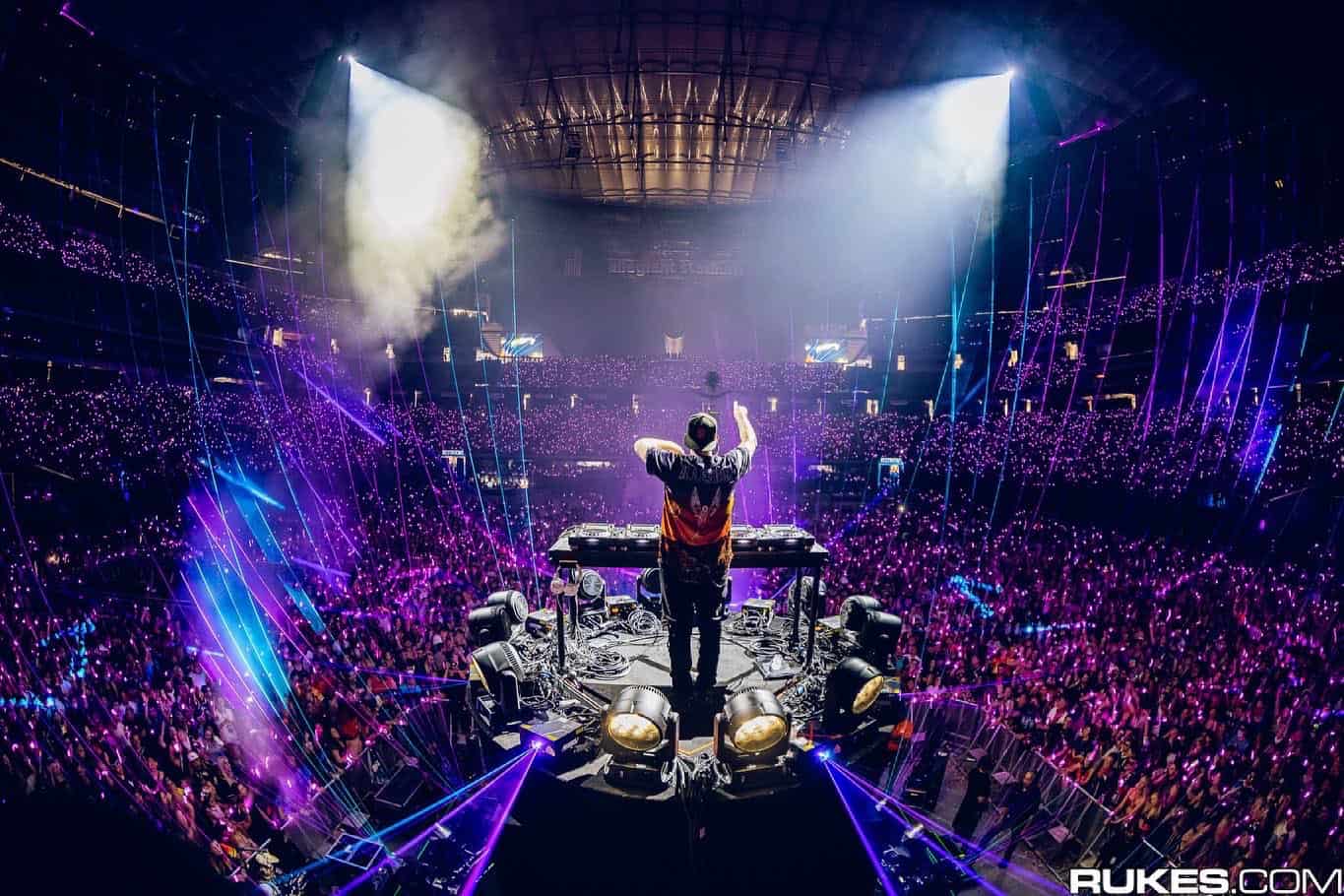 In 2008, Nick Miller sat in a room and began to learn how to create electronic music. Not knowing where it might take him or what he would accomplish, it was solely for the passion of the genre. Who would have ever guessed that 13 years later that room would transform into the sight of 40,000 people singing the songs of Illenium inside Allegiant Stadium in Las Vegas?

Announced back in May, the “Illenium: Trilogy” show captivated an audience for the first public event inside the new stadium on Saturday night. The show was an idea Miller had thought of the year prior, but due to the Covid-19 pandemic had to be shelved. 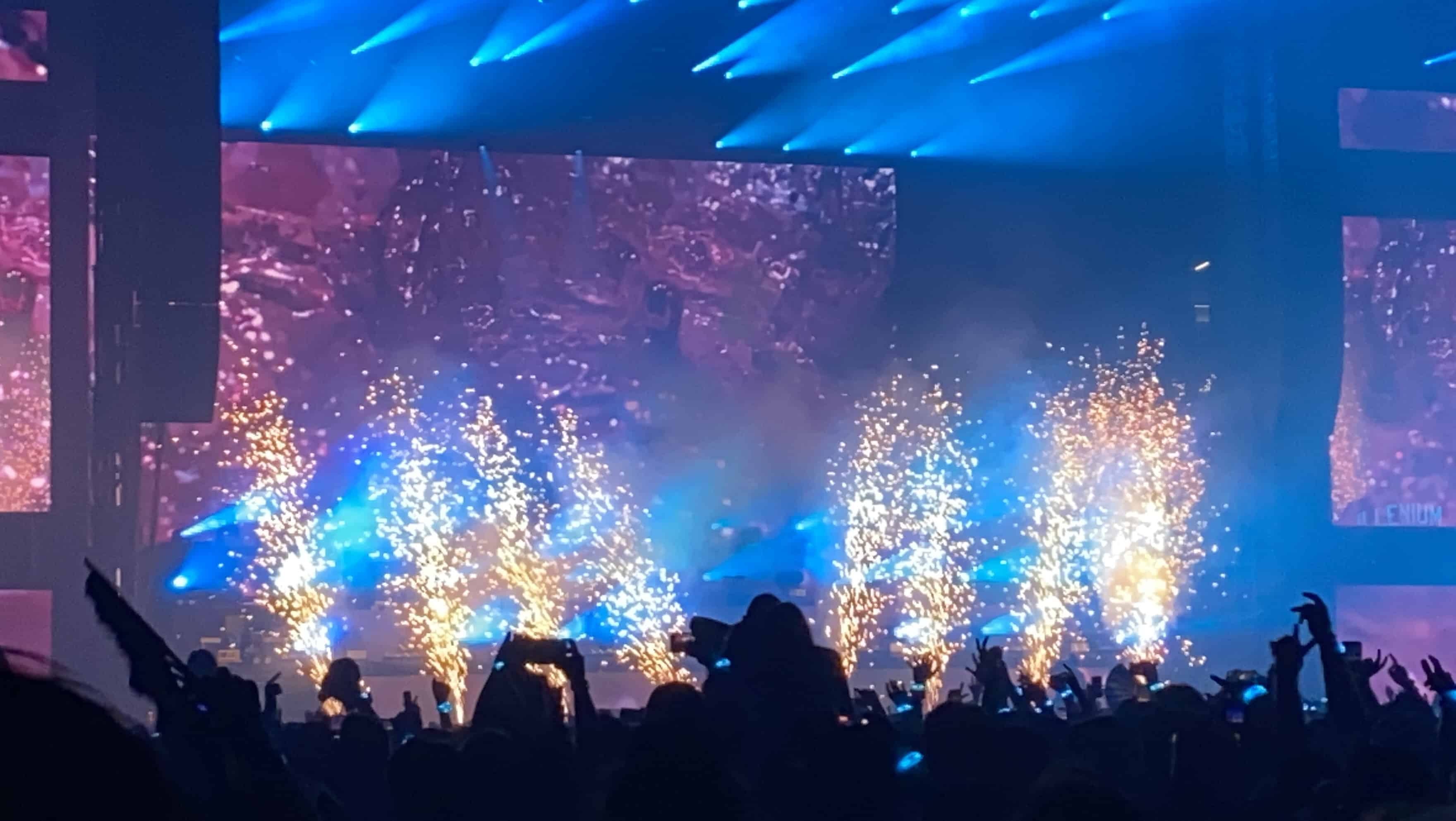 The concept behind the show was to give the three Illenium albums (‘Ashes’, ‘Awake‘ and ‘Ascend‘) a brand new experience and one last sendoff before his new album ‘Fallen Embers‘ arrives in two weeks. To give each album a specific set. All in one night. However, “Trilogy” isn’t just a title, it symbolizes something much greater. It represents the closing of a chapter. Putting a final period on the three projects that represented the transformation of Miller’s life.

“[The albums] turned into this thing that became a Trilogy. Because it represents the phoenix for me and my transition from a [worse] life. Because that was my past” – Illenium, Trilogy Show

In a way, not only does the “Trilogy” show represent Miller’s transformation in life, but the transformation of electronic music in America. The entire night was filled with conversations, how six years ago an event like “Trilogy” would have never been possible. What was once an untapped genre in America 12 years ago then turned into a slightly recognizable one in 2016 as the first Illenium album released. And now in 2021 with the ‘Fallen Embers’ release on the horizon, a DJ has just solo headlined one of the most prestigious venues in the entire United States.

The night began with support from Cloudnone and 3lau both getting around a 45-minute set. The openers did amazing getting the crowd ready for the pandemonium that was about to take place for the next 4 hours.

Then began the journey. The first set, the ‘Ashes’ set, featured Miller on a rotating platform in the middle of the crowd with minimal production. A set that brought back pure nostalgia with all of the tracks that first put Illenium inside the talks of EDM circles. The simple production symbolized the start of everything, small beginnings. Only using lasers, lights, and fog the unique set was nothing short of spectacular. 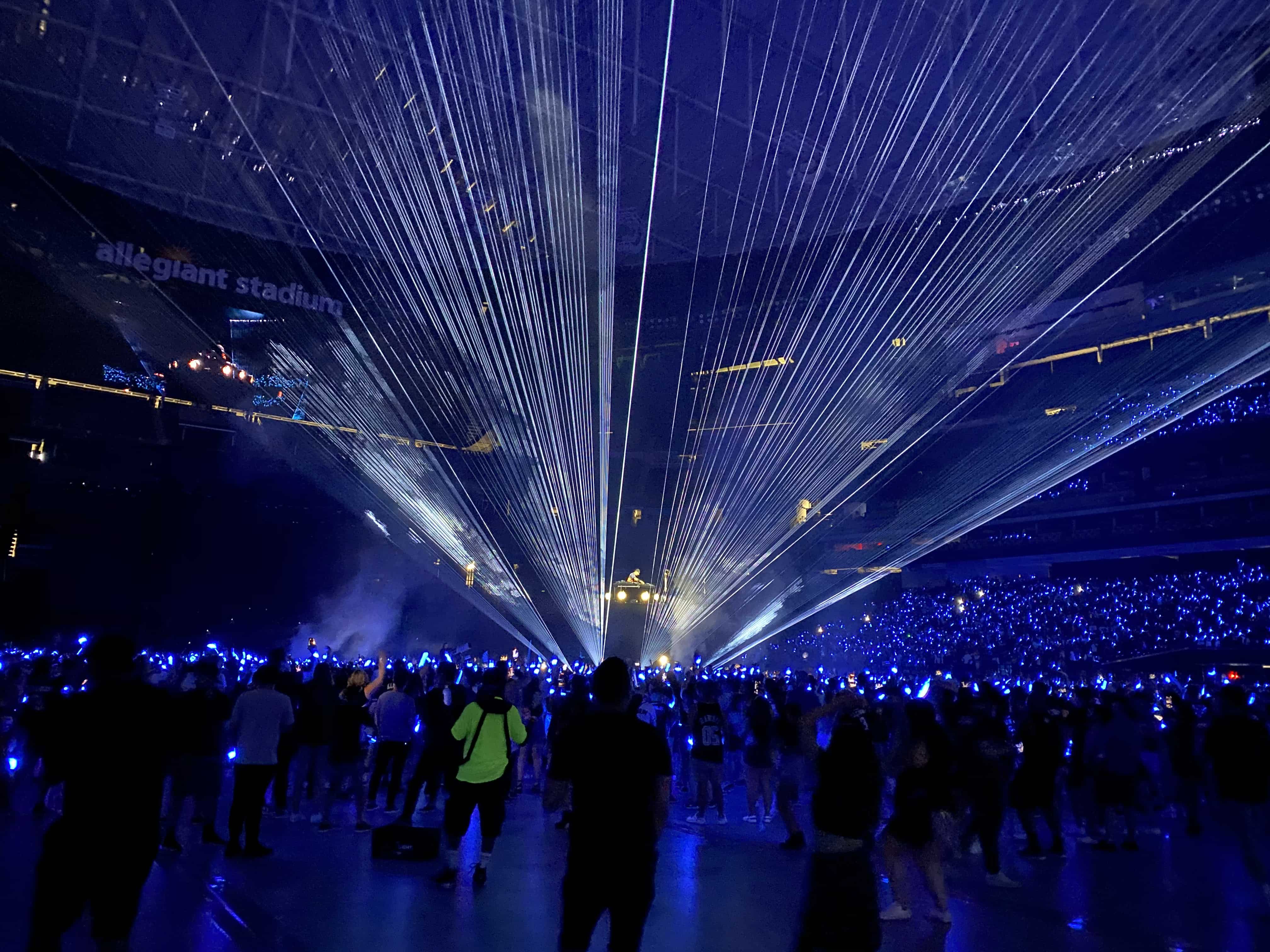 After came the second set known as the ‘Awake’ set. The album that featured the hit songs ‘Fractures‘, ‘Feel Good‘ and ‘Crawl Outta Love‘ stamped Illenium’s name permanently in the electronic scene. The set saw Miller now on the stage but only on the second platform of the three-level design. The set began with the iconic ‘Crawl Outta Love’ intro that Miller has become known for over the years. The ‘Awake’ set also introduced a bigger production. With fireworks on the side and pyrotechnics in the front of the stage. This symbolized the growth process in the journey, as things were becoming bigger due to the album’s success.

Lastly came the ‘Ascend’ set. Illenium’s most recent album which includes the hit song ‘Good Things Fall Apart‘ and solidified him as one of the biggest names in electronic music. This time, Miller was on the third and final level of the stage setup. Miller opened with his ‘Blood‘ intro mixed with ‘Hold On‘, the same intro that he premiered on his ‘Ascend’ Tour in 2019. The set included more fireworks and moving pyrotechnics in the front of the stage but also pyrotechnics towards the back of the venue so attendees that had floor tickets were surrounded with fire at some moments in the set. A unique addition. ‘Ascend’ is the final section to this chapter in Miller’s career, the ending point of this specific phoenix’s journey. What once started from small beginnings has now risen from the ashes to become an unstoppable force.

Then came the last 20 minutes of the night where there was a small preview of the tracks on ‘Fallen Embers’. One in particular titled ‘Brave Soul‘, written by Miller and his close friends’ sister. Miller told the audience that this song came at a time when his close friends’ brother passed away.

The song includes beautiful vocals that are backed up by even deeper lyrics. With phrases like “You left me broken, shattered to pieces. How can I go on without you” this track will pull on heartstrings come July 16th.

Just from the small 20-minute preview of what’s to be on the new album, it seems that another successful and impactful Illenium project is on the way. Blending new styles with his iconic ones, ‘Fallen Embers’ will represent a new phase in Illenium’s career. 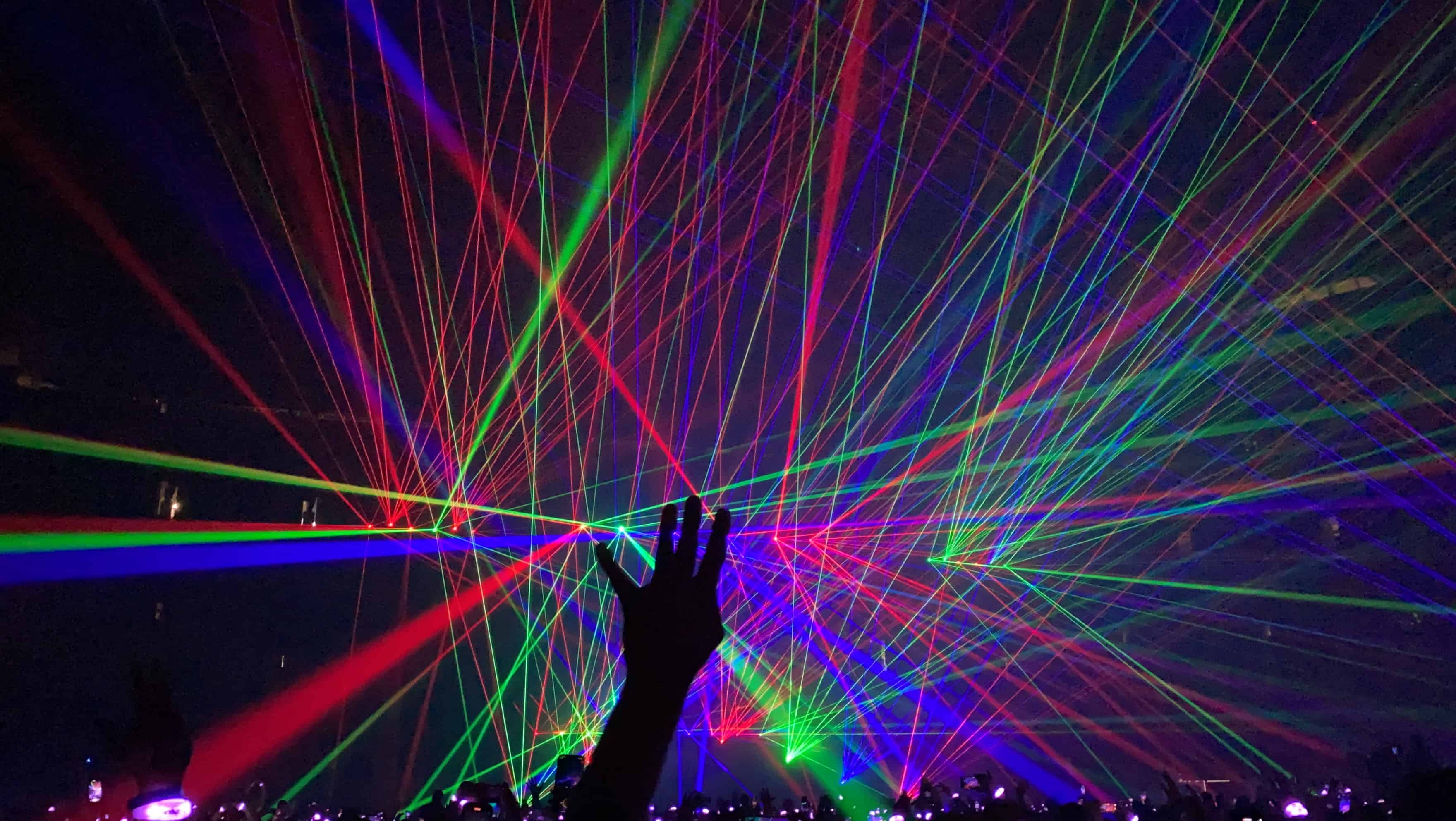 Whether you watched the show in person or on the live stream, “Trilogy” can represent different moments in life for each viewer. Moments of struggle or moments of triumph. No matter how you interpret it, one thing can be made clear from the show in Vegas. That the amount of symbolism and detail that went into this production was second to none.

“Trilogy” broke the record for the biggest dance music event for a single headliner in U.S. history. Not only was it the biggest night in the career of Illenium but it was also one of the crowning moments in the history of electronic music. An event that will be talked about for years to come, and showed that the EDM scene is alive and well. 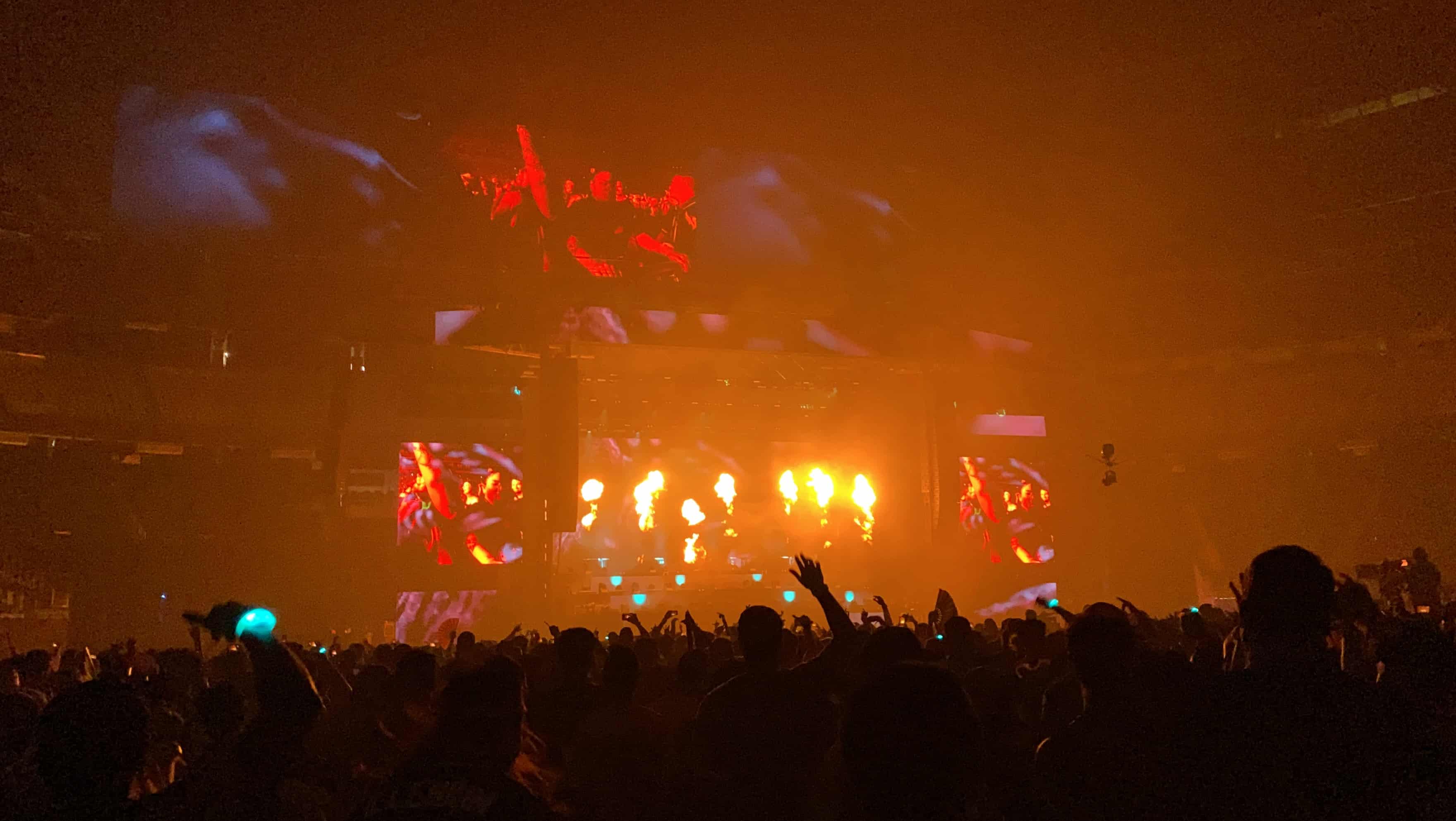 Tears shed down faces and others embraced with hugs as this was the first event for many of the attendees in over a year. Illenium did more than just provide an amazing show for the thousands watching, he brought people back together from out of the dark. Many describe Illenium as a bright light of hope in the world and that light was on full display Saturday night.

Miller shows that anybody can achieve their dreams and passions if they put everything they have into it. While the first chapter of the phoenix might have concluded, it is only the beginning. “Trilogy” is more than just a title to a show, it’s an idea, a symbol that you can push forward and elevate. Or just like the phoenix, you can rise from the ashes.

Pre-save Illeniums “Fallen Embers” album here. If you went to or watched the event on the livestream, let us know your thoughts in the comments.