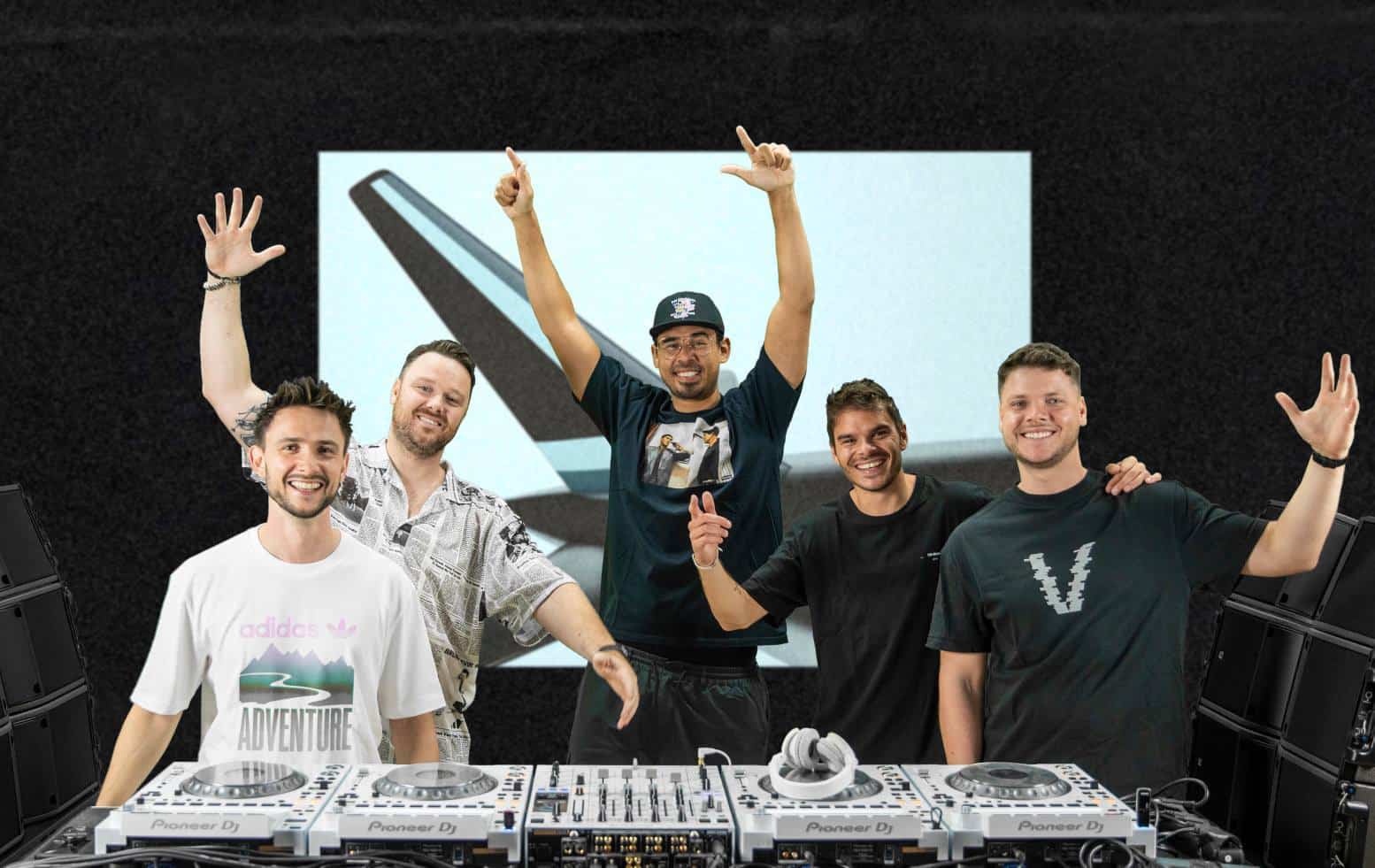 Afrojack and DubVision discuss latest release “Anywhere With You”: Interview

Last week saw the release of the A-list collaboration “Anywhere With You” between Afrojack, DubVision and Lucas & Steve on Wall Recordings.

All three contributors are established hitmakers in their own right and in coming together, they have produced one of the most explosive and highly anticipated records so far this year. “Anywhere With You” arrives as two and half minutes of progressive house magic, destined to grace some of the biggest festival stages around the world.

Following the release, we were lucky enough to catch up with two of the production parties behind this refreshing new festival anthem. Speaking in interviews with We Rave You, Afrojack (Nick) and DubVision (Stephan & Victor) provided us some insight into the creative processes behind the track and much more…

Congratulations on the new release, “Anywhere With You”! How have you found the support and reaction on the track so far?

DubVision: “It’s been amazing. Even before the track came out there was a lot of anticipation, a lot of good reactions with people sending us messages. We already felt quite confident about this track because we think it’s a very catchy track with a good vocal, good melody and everything. Of course, with big names, Afrojack and Lucas & Steve on it as well, everything’s been great so far around this track and we’re very happy with it.”

Nick, you set to work on the track after hearing the original demo from Taranteeno, why did it stand out to you and what ideas did you originally have in mind after hearing it?

Afrojack: “When he first played it to me and I heard his piano and vocals, I thought of Tomorrowland closing/epic festival vibes. The vocals are so simple, catchy, and beautiful, it made me really happy, so I was like let me figure it out. I then started working on it and made like 20 ideas and when I had THE idea I was like this is it! I called up DubVision because I thought it will fit their sound – so I called them and we said we’re gonna do it together. We started working on it together, they added a lot of festival craziness to it and then when that was done, we thought the record could still use some smoothing, to make it a little bit more radio friendly and we knew Lucas and Steve were very good at achieving that. So I thought, they’re on Spinnin’ Records and they are my distribution partner and I gave them a call to see what they could come up with. In the end they added so many things, which was great, but it was a little bit too much so I took some stuff out. before we all agreed on the perfect selection to start finishing it.”

For you Stephan, Victor, how did the collaboration originally come about from your perspectives, and why did you really want to work on it?

DubVision: “We think we’ve worked on “Anywhere With You” for a year or even longer. Afrojack sent us the idea, we worked on it and we made a typical DubVision-y, “big festival” kind of track out of it and he really liked it. But, the hook is so catchy he said it would make a good radio track. Then he said about adding Lucas and Steve to the group, because those guys know how to make a radio track. So then we sent it to the guys and they added certain instruments and extra little melodies to polish it off for the radio – they delivered, and we’re also happy with the end result!”

As part of your collaboration, how did you ensure you all applied aspects of your signature sounds to the track?

DubVision: “The first version was basically all our stuff, instrument ideas etc so a big part of our trademark sound was already in it and then Steve took that and added some stuff before we met up and we finished it. We think the key thing in the vision for us was the lead sound and the chords to make it a real festival mix. We think it’s a perfect mixture of all three groups, so we are very happy.”

Afrojack: “I didn’t really with this record. With some records I’m really like, okay, this has to be like this somewhere, that needs to be placed somewhere. But in this case I just wanted to make a good dance song that works and that does its magic for the people, because that’s what I felt the record was. That’s also why I wanted to work with these guys – it’s also a record for them that compliments their style. I just think it’s a great record and I saw potential and thought, if no one’s doing it, I’ll do it.”

What was it like to have three separate parties working together on a track?

DubVision: “It’s amazing – we’ve worked with Afrojack for a long time so we know him very well and have done some cool tracks together. However, we have never worked with Lucas & Steve despite also knowing them for a long time; we always wanted to do something but never got the chance to work on the right project. When we started working on a track we were really happy because the hook is really catchy and it’s radio friendly and people are going to sing it instantly because it’s so easy to remember. It’s a perfect track for all of us, a dream combination too.”

For aspiring producers out there, how important would you say it is for you to collaborate like this with other artists when looking to make new music?

DubVision: “It’s not 100% necessary like some, some producers are very original and stick to their own thing and they don’t want to collaborate and eventually they break through. What we think is very helpful, at least for us, is that we’ve collaborated with so many people including Armin van Buuren and Afrojack. Every time we work with someone we learn some new stuff but we also gain a new audience because you also get the audience of that DJ. We think it’s a very good way to get a little bit more exposure and to learn more stuff but it’s not 100% necessary. We can advise young producers to at least think about what kind of names would fit your sound. Sometimes it’s also very interesting to pick someone to collaborate with that is very different from your own sound, so you can create something unique.”

Afrojack: “It’s a necessity for growing yourself in the industry, but remember how many possibilities there are for a song. So when you go into the studio and you start something, there’s many different routes you can go down. When you collaborate, you can learn new things and find new ideas, and especially find a new mindset by listening to why they think something should be a certain way.”

Nick, you’ve already played this track out in your live sets in places like Romania at Untold Festival, what was it like to play new music out to a live crowd again and how did the track go down out there?

Afrojack: “It was scary! When the song got to the break, I think they liked it and I grabbed the mic and asked them and they did seem to so that’s pretty cool. You know, it’s funny, a lot of people think when you make a song that you already know that everyone’s going to like it but you don’t really know until you put it out and you see the comments and you see their reactions.”

Stephan, Victor, have you guys had much of a chance to play “Anywhere With You” out to a live audience yet? If so, how did it go down?

DubVision: “Three or four weeks ago we played a festival in Prague, and it was amazing. The people were super happy and super into the festival because everybody hasn’t partied for so long. It was in the middle of the woods and we played a lot of new music and the track went down  amazingly so we’re very happy. We’re scheduling new gigs and we’re so happy that we can play this out live again soon.”

If fans want to get out and hear your new track live, can they see you perform anywhere in the near future, and if so where?

DubVision: “The first big shows that we have confirmed are in America as part of a US tour, so yeah we are super excited for that because we haven’t been there in so long. We’re going to New York, that’s one of the first times that you can hear “Anywhere With You” live anywhere. We also have ADE coming up, if you are in town we have a few shows so come down!”

Afrojack: “I’m going to be in America for a month, I’m doing 18th of October to 18th of November in the USA, doing a lot of shows there, so that’s going to be the only place to catch me for a while. After that I don’t really know yet, though I have a lot of options for shows in Asia.”

Check out “Anywhere With You” below!