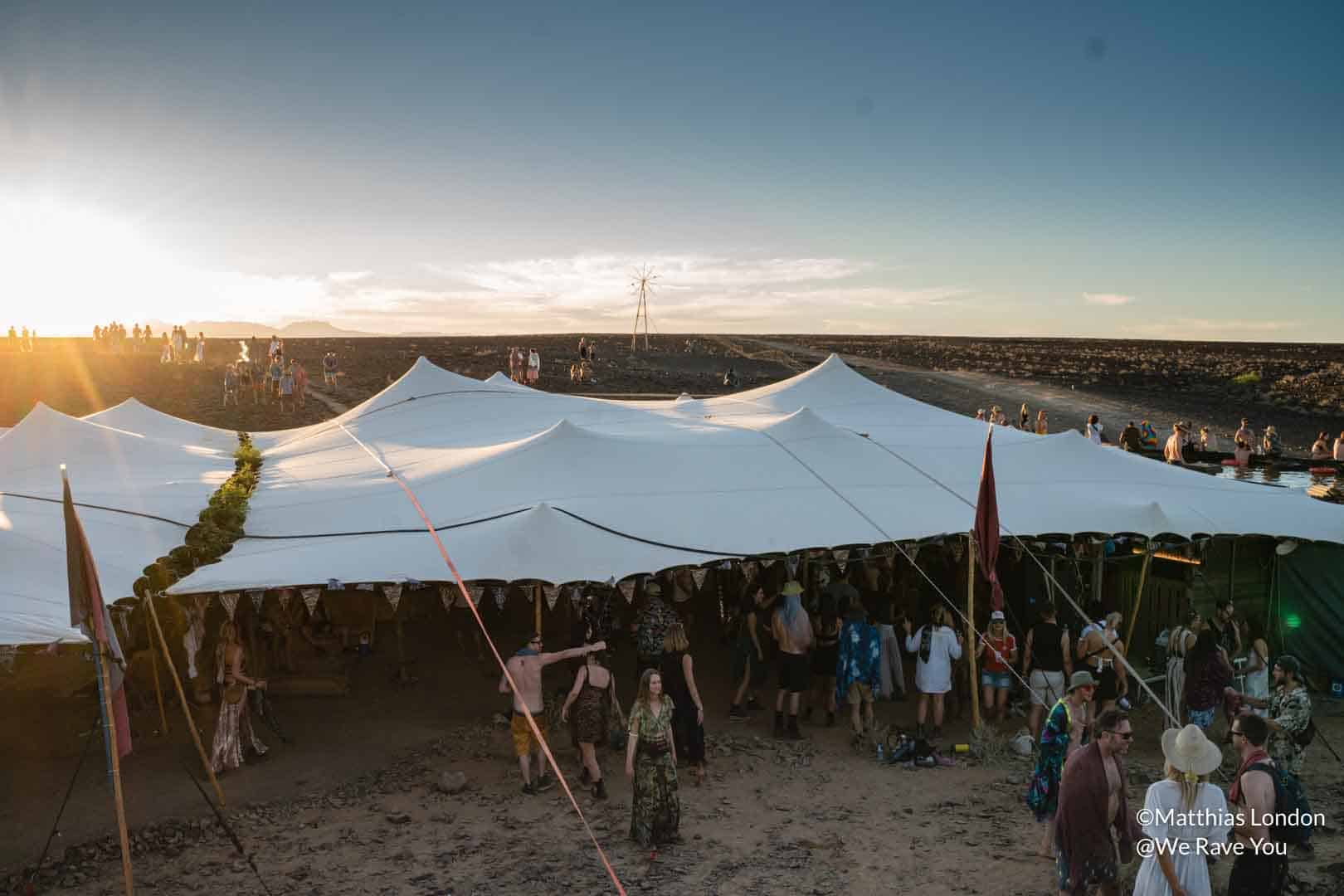 Review: Return to the Source, the boutique festival in the South African desert

The Return to the Source festival staged an extraordinary Halloween party: From October 29 – November 01, the private nature reserve Tankwa Town in the South African desert hosted an electronic dance music and art festival guised in post-apocalyptic steampunk aesthetics. The lineup featured local South African scene makers, such as Ian Skene, Offroad, and Soundlanguage, as well as international acts from Germany, like Andy’s Echo, Sebastian Zappa, or Bellville. Though, in focusing on community and experience, the Spirit Train – a collective that co-creates the AfrikaBurn – designed the Return to the Source festival in a way that made it more than just a music festival in the desert.

The genesis of Return to the Source

The Spirit Train is an ongoing musical art project that created a mobile festival stage powered by a vehicle in a Wolf-headed ironclad. Yes, it’s a live music stage that actually hovers over the dust-dry desert floor. 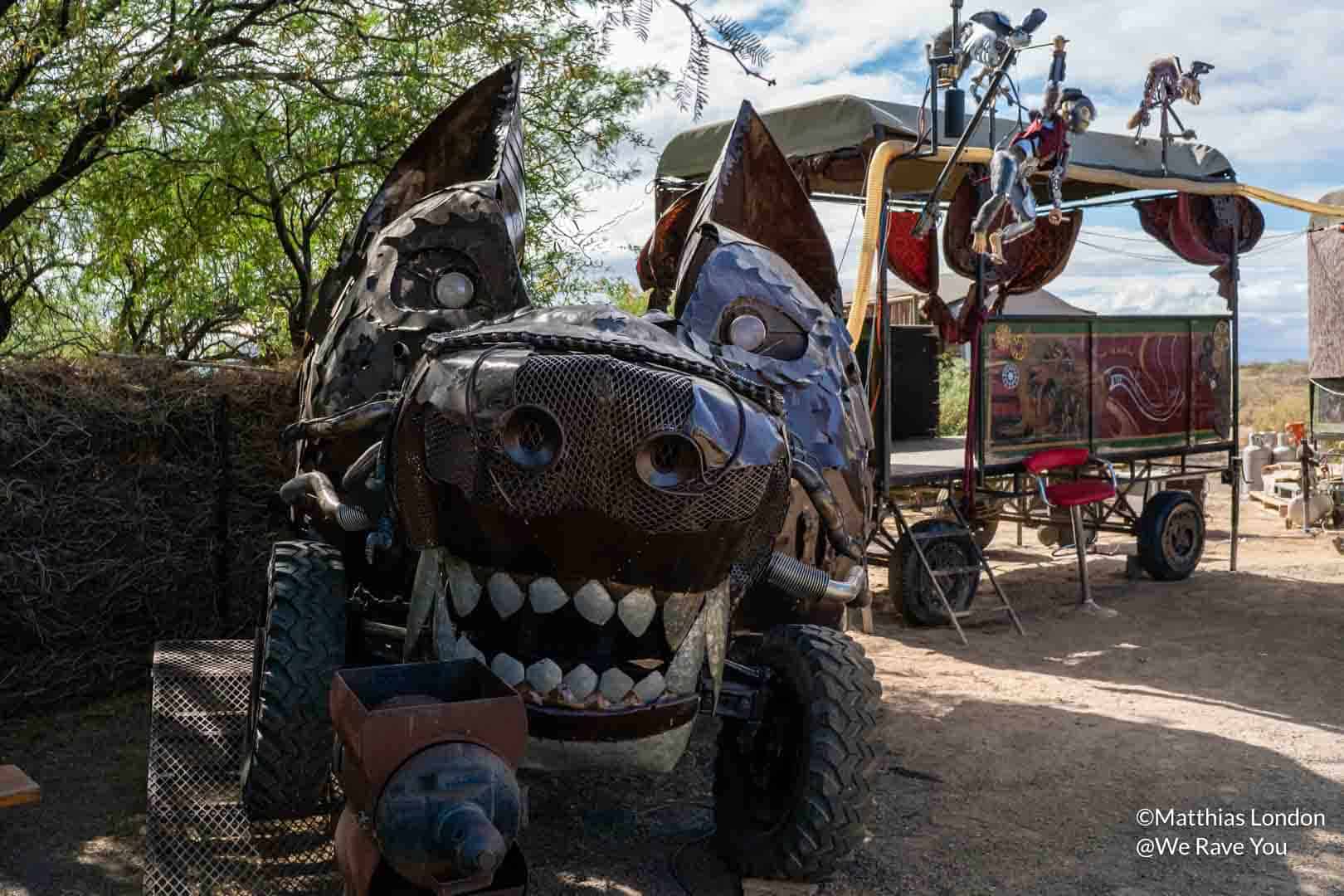 Size, location, music policy, bookings, timetable, and artistic performances were thoughtfully set to attract the conscious community that would foster the desired safe and intimate festival environment. As a boutique festival, merely 800 tickets were sold under minimal marketing efforts. Most participants were frequenters of the AfrikaBurn, while newbies, like myself, had heard of it by word of mouth.

Location of Return to the Source: Tankwa Desert Town

Return to the Source happened in Tankwa Town, a private nature reserve, around four hours driving from Cape Town. Centuries-long cataclysmic environmental circumstances in the off-grid festival area gave rise to a pristine landscape of brilliant volcano stones, so far-reaching that only the monumental mountain chains at the horizon could end it. Stepping into the Tankwa desert from the shuttle felt like setting foot on Mars. 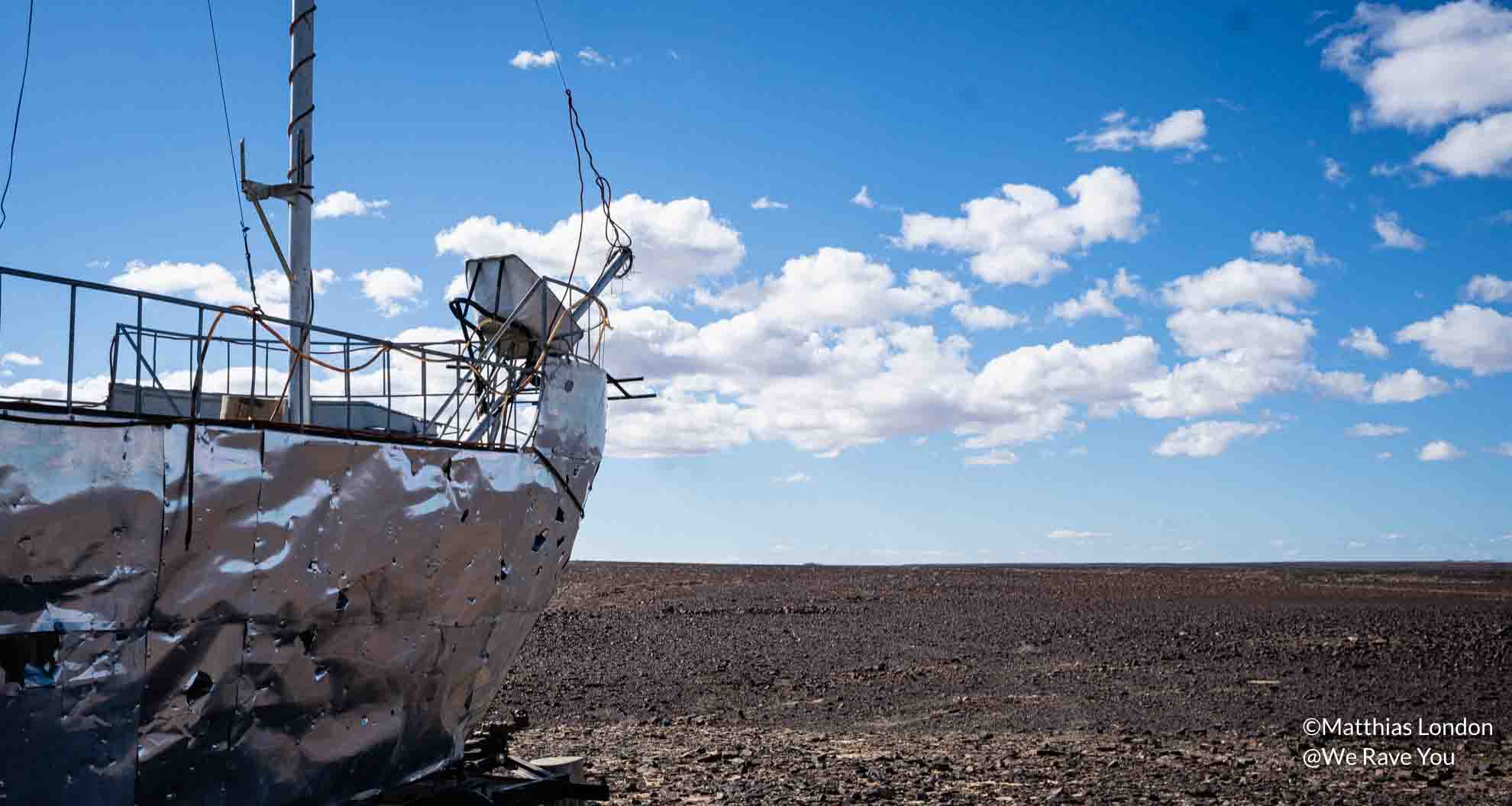 Unlike AfrikaBurn, Return to the Source did offer food and beverages on-site, meaning festival-goers did not have to prepare themselves to live entirely self-sufficient throughout the festival. However, the entirely solar-powered festival area hours away from civilization did encourage an anti-capitalist lifestyle of sufficiency and sustainability. Though, you could trust that someone in the community would give you a helping hand when needed. It was also guaranteed that someone would barter basic necessities against a performance of a song, dance, or a poem – in classical Burning Man and AfrikaBurn manner.

Return to Source engineered its sounds according to its ethos of consciousness and booked its DJs following the same paradigm. Music can be enjoyed from nine in the morning until four in the morning on two stages that run independently, not simultaneously, to keep the community together in a place at a time.

The Dam Floor at sunset

The Dam Dancefloor was located under the blazing desert sun and inserted the audience into a stretch tent protecting them from the relentless sunbeams. As the daytime stage, it eased the audience into the day, typically starting with meditative gong sounds and atonal music. As the day progressed, beats became more rhythmic, infused with dubbed-out-reggae or atmospheric downtempo. 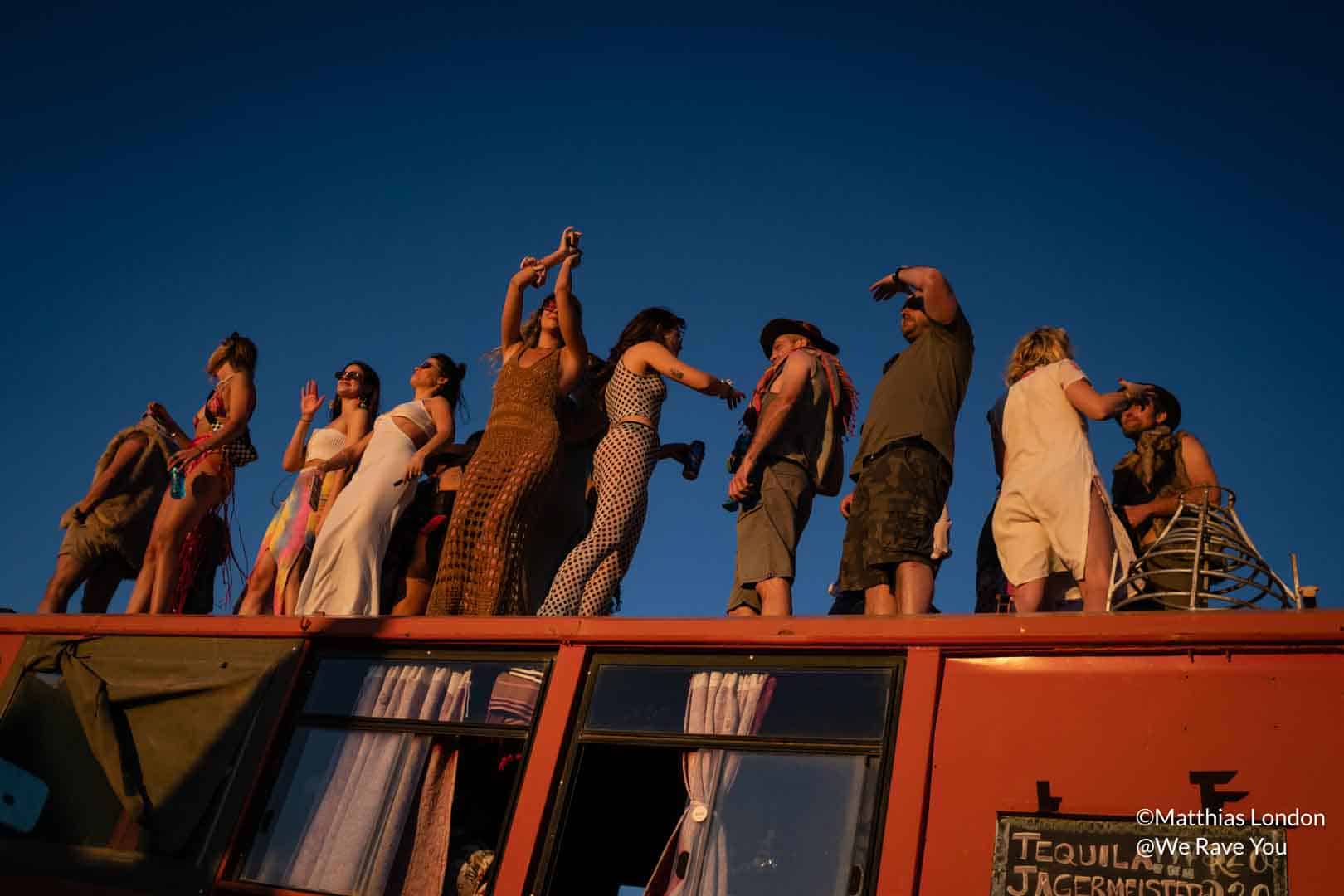 A misused bus sidelining the stage became the hotspot during sunset hours, as it overlooked the dancefloor and the vast landscape mouthing in the picturesque departure of the sun. The breathtaking sundowns were usually accompanied by easy deep house or disco, danceable beats that smoothly transitioned the audience to the more progressive beats that would expect them later on the other stage. The South African DJ Ian Skene explained to us that,

“Downtempo has a similar BPM as our heartbeat, hovering between 60 – 80 BPM. That makes it an excellent rhythm to make the body relax. Using rhythms that way prepares the crowd for the evening, where the heart is exposed to frequencies of 120 BPM upwards.”

The Dam Dancefloor’s closing on Sunday by headliner Andy’s Echo was a monumental moment for him and an emotionally touching one for the crowd. The German DJ and producer blasted the melodic beats he produces himself and topped them with mesmerizing guitar strokes and dreamy vocals in an astonishing live set. He left the crowd flabbergasted, uttering their deepest gratitude for something many of them said they had never heard or seen before. Speaking to the crowd, Andy’s Echo said,

“It’s my first time in South Africa – first time in the desert – and it’s just surreal to perform here. I need some time to reflect on this whole… experience. Thanks for being here with me, thanks for dancing.” 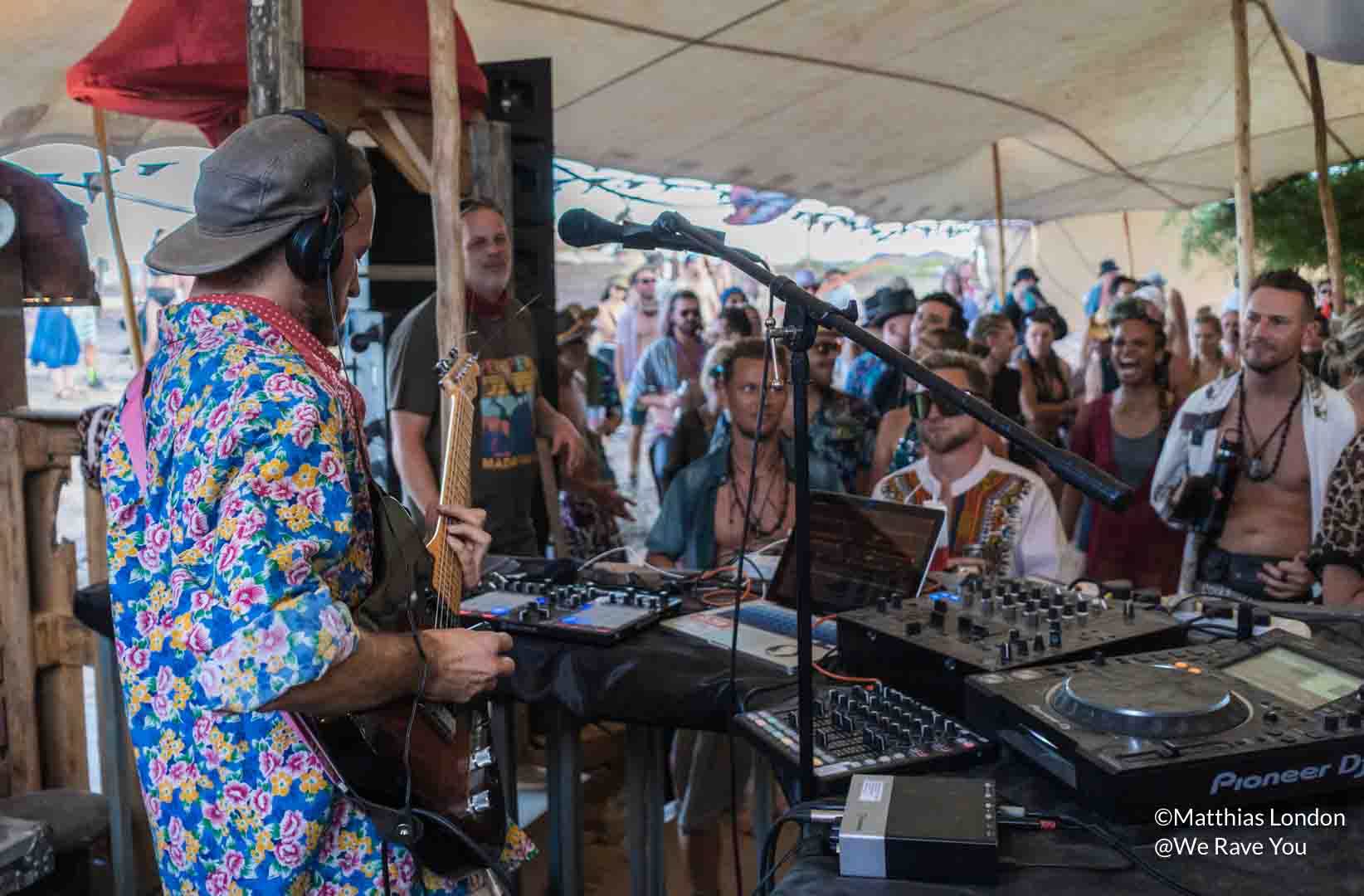 At 8 p.m. sharp of each night, the Spirit Train stage echoed a repetitive wolf howling into the depths of the desert, calling for the spirits to assemble for the dance under the vast, milky-way-sprinkled night sky. The whole festival transformed into a colorful wonderland at night, drenched in an epileptic light- and fire show surrounding the circular main stage.

The heart of the wolf – the middle wagon – became the booth from where the DJs hammered more progressive beats into the audience. Genres reached from dark disco, over deep house, and tech house to four-on-the-floor techno bangers. The later, the darker. 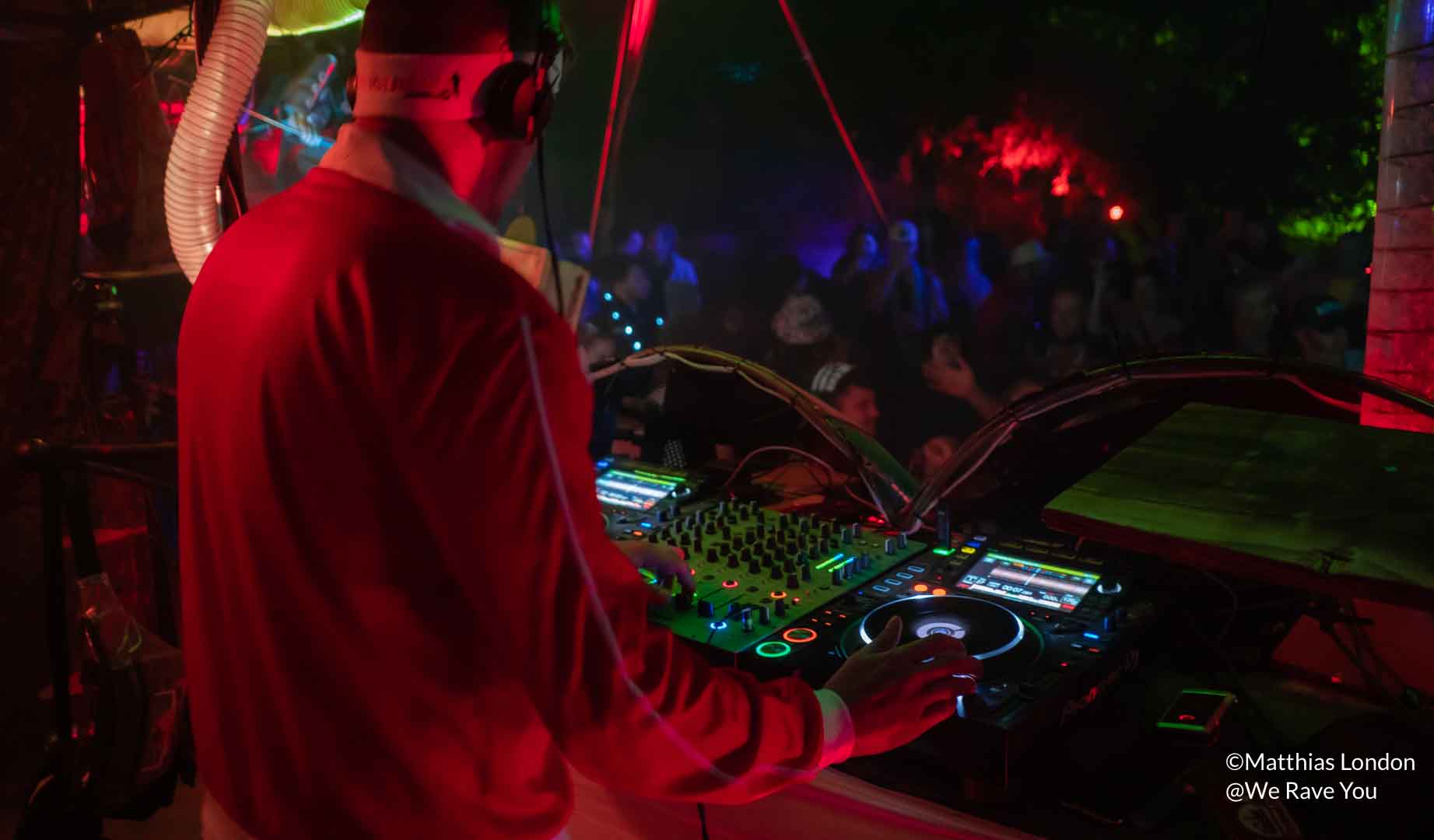 Friday night’s closing was played by Sebastian Zappa, who made the crowd’s chests shake under heavy bass-laden melodic techno beats. He closed with the track “Walking with Elephants” by Ten Walls, for which he garnered infinite expressions of gratitude when he walked off stage.

Most participants warmly welcomed the five-hour-long breaks after each closing to rest. Desert nights are as cold as the days are hot. Those were the only hours were sleeping was possible, as the tents were unwillingly turned into saunas by the time the sun rose, making sleep beyond 8 a.m. a Sisyphus task.

Aesthetics and art at Return to the Source

Beyond the purposeful selection of music, Return to the Source had a designated visual aesthetics. Not surprising, considering that it is an offspring of the Spirit Train, which stands at the heart of the AfrikaBurn universe.

Art installation of a pristine stone hanging inside of a labyrinth.

Art installation of a wolf at the AfrikaBurn playa.

On top, Return to the Source made sure to visually represent that steampunk ethos in their visual setup. In addition to the Spirit Train, they staged multiple humongous steel installations in the desert and decorated the interior of bars and other areas of socialization in a coherent style. That’s what’s possible when you throw an amalgamation of passionate creatives from a variety of disciplines together and let them lose themselves in the pits of artistic encounters with one another.

Challenges: A utopia for those who can afford it in a country marked by racial inequalities

Notwithstanding the efforts to create a socially inclusive festival of all racial and ethnic identities, Return to the Source is still situated in South Africa, and inevitably mirrors the country’s skyrocketing social inequalities. As a country that only transitioned into its post-apartheid era in 1994, it is still characterized by deep inequalities that are entrenched along racial lines.

Hands on the heart, the demographics of the festival are facts, and fact is, that at least 95% of the people present were white. That is not to blame Return to the Source for purposefully excluding people based on their ethnic identities. It does demonstrate, though, that the price for participating requires a certain class privilege, a privilege, that the majority of South African people of color do not possess due to centuries of racial exploitation and spatial segregation.

As a culture, electronic dance music aspires to further the principles of social inclusion, non-discrimination, community-building, and interconnected humanism. However, to translate those into material practice, it must acknowledge the systems of oppression into which it is embedded and categorically challenge them. That would mean, for Return to the Source and other festivals, to find creative ways of ensuring participation for those who have the desire but lack the economic means.

That being said, within a small scale, Return to the Source did bring the community ethos and experience-centeredness across, making it more than merely an electronic dance music festival. On the way back, one of the organizers said that they will maintain the festival’s scale, leaving it at a maximum of 800 people:

“The smaller size creates something quite magical, something intimate, and we want to keep the spirit like that.”

Return to the Source happens twice a year: In South African spring and autumn. The next edition will be in autumn 2022. Don’t miss your chance to grab a ticket as long as they are available or email Mike from the Spirit Train for more information.

Image Credit: Matthias London for We Rave You