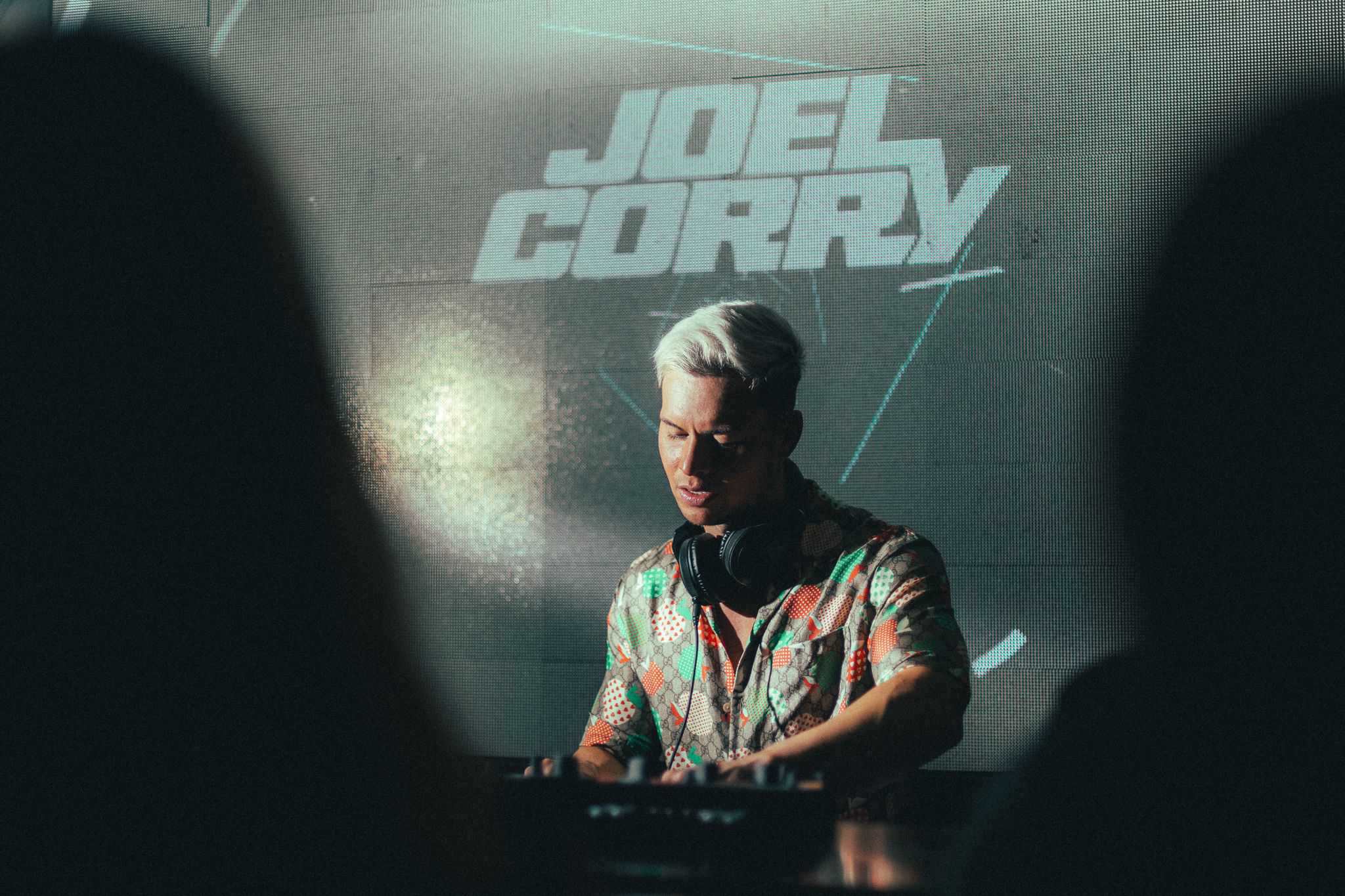 As he sits at FIVE Hotels & Resorts, UK club staple Joel Corry couldn’t have even comprehended the success that he was to experience throughout 2021. The past 12 months have been incredible for the 32-year-old DJ and producer from London, as he has ventured back on the road with huge new dance hits in his back pocket.

Following the chart-topping success of his record “Head & Heart’’ last year, productions have come even bigger and better this year. Having worked meticulously on new music over the course of the pandemic, studio time has proved fruitful as his most significant release of the year arrived alongside the number one DJ of the world, David Guetta. Combining with the Frenchman and talented vocalist RAYE, “BED” charged to the summit of singles charts world-wide, putting even more global acclaim to his name. He didn’t stop there either, combining with fellow UK mastermind Jax Jones, Charli XCX and Saweetie for their dynamic floor-filler, “OUT OUT”. Following an invigorating performance at Printworks in London, Joel Corry found himself performing out in Dubai earlier this month at The Penthouse at the stunning FIVE Palm Jumeriah. We caught up with him ahead of his set at The Penthouse venue overlooking the “City of Gold”, to uncover his highlights of 2021, inspirations and more in an exclusive interview.

How has your FIVE experience been so far? How often do you come back to play here in Dubai?

I’ve had a short trip, but an amazing trip. It’s so nice to get a little break away from London where the weather’s not great this time of year. I’m looking forward to playing in this amazing venue in The Penthouse – I already know it’s going to be crazy. I love coming to Dubai, it’s my happy place; I was also here in January, at the start of 2021 for a couple of weeks and it was so beneficial to me. I find it hard to ever take a holiday because things are very busy and I like to work hard. However, I realised when I was here earlier last year that it was good to have those two weeks off to just reset and get some clarity in my mind – it definitely helped me for the rest of the year. I’m going to come back again for another two weeks at some point, just to make sure I get that rest time again.

How do you prepare for a set at The Penthouse in Dubai in comparison to somewhere in the UK, for example?

Regardless of where I am, I always play based on the crowd’s reaction and tonight I know they’re going to be fully up for it, so it will be a very energetic set. They will be looking forward to hearing Joel Corry records but I’ve got a two hour set tonight for FIVE so that’s enough time to take them on a little journey as well and play some new stuff!

You’ve obviously had an insane year, with over 100 million streams on Spotify alone. When you look back on the year, what are some of your personal highlights?

There’s been a lot of highlights – 2021 was a very special year for me. One that springs to mind was during the summer when I got to support David Guetta at Ushuaïa, Ibiza. We had this amazing moment when we played our record “BED” together, he had his arm around me and the crowd was going crazy – so that was special. Also, I did my first US tour this year. I toured around the whole of America, going to Las Vegas for the first time, New York, LA, Miami, and Chicago, which is something I’ve always dreamed of doing. The gigs were amazing and to see the response to my records in the States was mind blowing. I don’t think I had really realised that my music has crossed over to America. When I’ve been at home in London during a pandemic, my music has grown over there and now I get to DJ over there too where crowds are singing to my records. I could tell you about many more highlights too, it’s been a great year!

How has this pandemic period affected you? Do you think you used the time productively as you were made to sit in the studio? Were you inspired to create more?

100%. I’m quite a positive person. When the pandemic first started, my single “Lonely” was peaking and I had this whole year of gigs to come and I felt like it was going to be my breakout year. I had this really special feeling and then literally within a week, it all got cancelled. I felt heartbroken at first but then realised that this was my opportunity to get in the studio and use the time productively. That’s what I did in the first lockdown. I finished “Head & Heart” and then in the second lockdown, I collaborated with David Guetta for “BED”, so I can look back on that period of time as a very productive time for me. As a DJ however, this is what I’ve been doing since I was 16 years old, and now I’m back on tour and doing the thing that I love most in life. I’m more grateful than ever, because I realise now, that things can get taken away from you so quickly, and that I am lucky to do what I do.

Obviously you have some sort of formula for making hits. Whom or what are some of your main inspirations?

I would break it down into two parts in the sense of inspirations as in people that I look up to – you have got people like David Guetta and Calvin Harris, who have built global brands as DJs and have commercial success in the charts. They are also playing every big festival around the world, playing every mainstage and that’s the thing that I dream of doing. Then if we’re talking about inspiration from a DJ and producer angle, when I first started DJing I started with Garage music, which is different to the music that I put out now. Over the years, though, my music taste has evolved – I think every DJ or producer goes through this journey, especially if they start as young as I did. You experience different things in life that will influence you and I think I have found my formula mentally.

Having had such insane success with some of your hits, do you always feel pressure in producing the next one?

There is pressure, but I relish that; bring it on! Pressure means that you’re doing something right, and that makes you work harder so you don’t slip up. More pressure means more motivation. It’s needed; it makes you more precise.

What would be the best advice you would give to someone that was in your position or of a similar age that is wanting to break through and be the superstar that you are?

When I first started DJing I worked for free for so long, it was almost like a bit of a hustle. I would ask resident DJs if I could warm up for them, give them my mix CD, and ask if I can play their warm up sets. I eventually played a few before getting my own night and building myself properly as a DJ. Therefore, I would say my first bit of advice is to be prepared to not earn any money in the beginning and just get your name out there and hustle. That’s what I did, and that is how I got my chance and now why I’m playing in places like FIVE Hotels & Resorts. The second bit of advice is that everything comes down to hard work. You can’t get away from that – if you’re willing to commit to the dream, that’s essential. It might take you a year to get your break, it might take you two years, it might take you over 10 years like it took me, but I was willing to commit 100% to make it happen. The third thing, which is the easiest, is to just have good manners. Being polite and having good manners doesn’t cost a thing in life. Everyone remembers somebody that’s polite to them, so that may be the most important thing to be honest.

FIVE Hotels and Resorts are taking their winning formula and investing in their new record label FIVE Music. Headed by FIVE CEO Aloki Batra, music is now a central focus of the FIVE umbrella, acting as the middle point for all that they aim to achieve and focus on within the brand going forward. They have established themselves at the very heart and soul of the Dubai party scene over the years, drawing in top artists from around the world to perform in their own intimate settings. Whether its the melodic vibes of Bohemia at Beach by FIVE, the intimate deep tech-house sounds at Skyline Thursdays at The Penthouse or Nomad Brunch at Soul Street, there is something for everyone no matter the time of day or the year. FIVE recently celebrated Christmas and New Year with their spectacular event, “FESTIVE”, which brandished unique dinners, spectacular NYE fireworks and nothing but the best in electronic music. Beyond Joel Corry, Christmas and NYE, they look to continue momentum well into 2022, with big plans for FIVE Music in the near future. You can visit their website here, check out their YouTube channel here and their Spotify here.