Regardless if you are currently in Indio, California, making your way to the west coast or planning to experience the magic of Coachella from the comfort of your own home. It is important for everyone to know the festival schedule, including the individual set times for the artists that will grace the seven magnificent stages throughout the weekend.

With over 100 artists performing, it will be hard to name them all. Each day showcases incredible musicians from start to finish that will without a doubt put on performances of a lifetime. However, as we highlight a few individual acts, the full schedule will be posted below.

(The following times will all be in pacific standard time)

Coachella will open its gates each day at noon. Both Friday and Saturday will see the festival conclude around 1 am, with Sunday being the exception as it will end around midnight. For those currently at Coachella, any line shuttles will be departing from local hotels from 12 pm to 8 pm and will have return service up to 60 minutes after the music ends each night.

Friday starts the weekend off right with some heavyweight acts. First, early in the day, the Mojave stage will host up-and-coming soul-pop sibling group, Lawrence as they go off at 2:25 pm. Not much later, across the way Lost Kings and John Summit will get the party going early in the Sahara Tent at 2:50 pm and 3:35 pm, respectively. Following them in the Tent will be Dom Dolla at 4:35 pm and then Arcade Fire at the Mojave stage at 6:45 pm. As the night takes over, Madeon will be bringing his Good Faith Forever production to the Outdoor Theatre at 7:40 pm. After that, Lil Baby will bring the madness to the Coachella stage starting at 8:25 pm, before Harry Styles headlines at 11:35 pm. Electronic music fans will have the pick of the litter when choosing a closing act to watch as Slander, Lane 8 and ARTBAT will all be closing different stages.

As day two gets underway in the desert, attendees will have another afternoon filled with incredible acts. Chelsea Cutler takes center stage at the Outdoor Theatre at 2:30 pm, while at the same time, VNSSA will be in Sahara Tent as she begins at 2:10 with Whipped Cream following her at 2:55 pm. As the afternoon wanes, fans will have the opportunity to see rising star Giveon on the Coachella stage at 5:30 pm. Bringing in the nightcap will be none other than Disclosure at the Outdoor Theatre and Tchami in the Sahara Tent at 7:10 pm and 7:15 pm, respectively. As the night grows deeper, one of the most anticipated performers of the entire weekend, Flume, will return to the Coachella stage at 8:35 pm for a can’t miss performance. After Flume will be Megan Thee Stallion at 10:05 pm and Billie Eilish at 11:30 pm to close out day two.

As we come to the final and third, it presents possibly the most exciting performances of the entire weekend. Just a couple of hours after the gates open, R&B and hip hop artist Mariah The Scientist will be one of the first acts up at the Outdoor Theatre at 2:00 pm. Then fellow hip-hop duo Run The Jewels will be bringing the heat to the Coachella stage at 4:35 pm. Towards the end of their set, FINNEAS will begin his show back at the Outdoor Theatre starting at 5:05 pm, with Solomun following at 6:15 pm.

Across the way back in the Sahara Tent, Vince Staples will be performing at 5:35 pm, and after him will be electronic duo Duck Sauce at 6:50 pm. With the final night taking full form, Coachella held back no punches. First Karol G will be on the Coachella stage at 7:00 pm and right after her newly Grammy-winning artist, Doja Cat will bring her moves to the main stage at 8:30 pm. In the Sahara Tent, Duke Dumont will keep the party going at 8:20 pm, with Denzel Curry closing out the tent at 9:40 pm. Electronic legend, Fatboy Slim will also be under the spotlight at the Yuma stage for one of the last performances of the night at 8:30 pm.

All eyes will, of course, be on the Coachella stage at 10:20 pm as newly acquainted headliners Swedish House Mafia and The Weeknd join forces for what is currently the most talked-about set of the entire festival. The Swedes will unveil a new production as they are currently coming off the release of their new album ‘Paradise Again.’

There are so many great acts we named and plenty more that we did not get to. With day one of Coachella starting later today, it is hard to express the excitement as the party in the desert has officially returned.

View the entire lineup by each day below. Watch the stream on Coachella’s Youtube page starting at 4pm here. 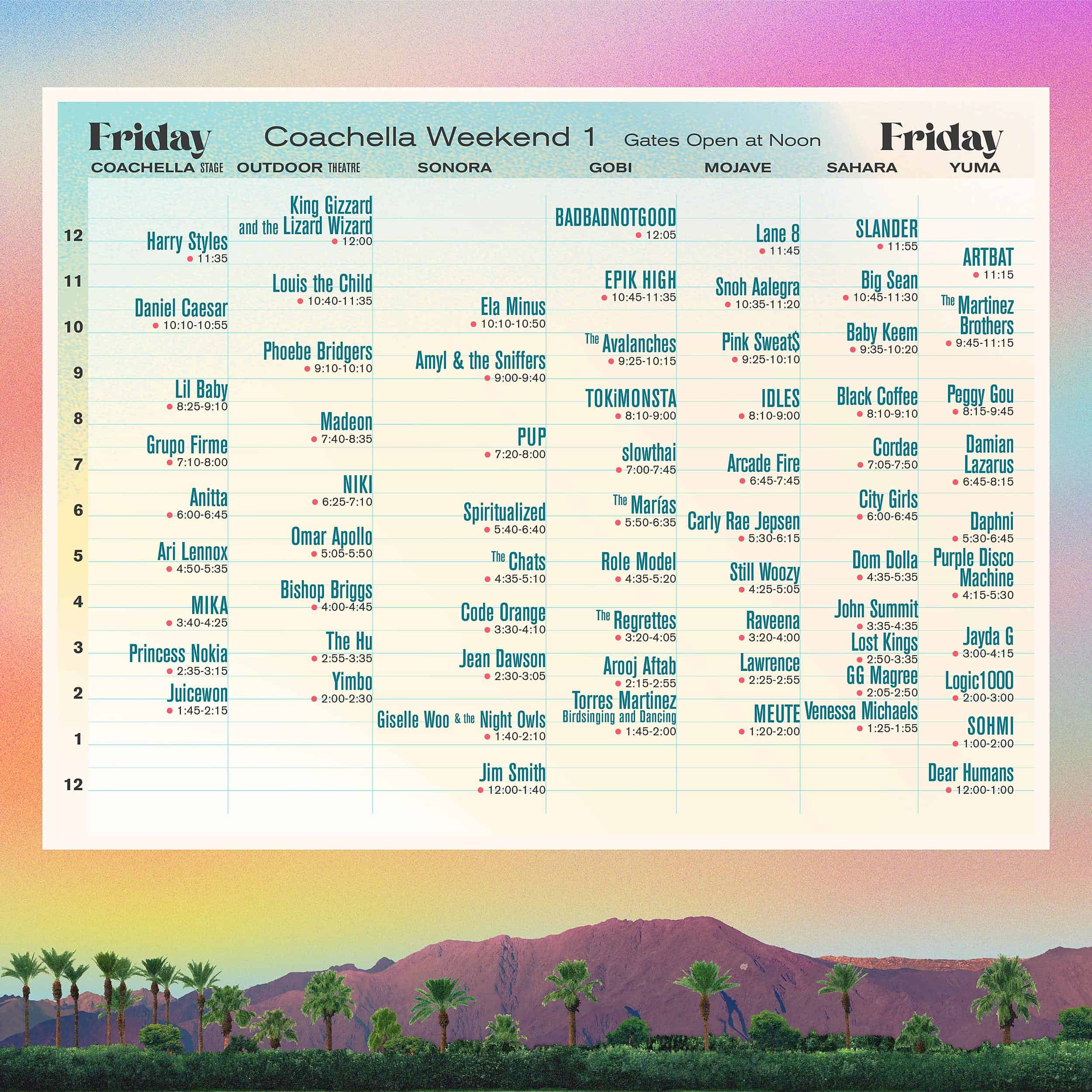 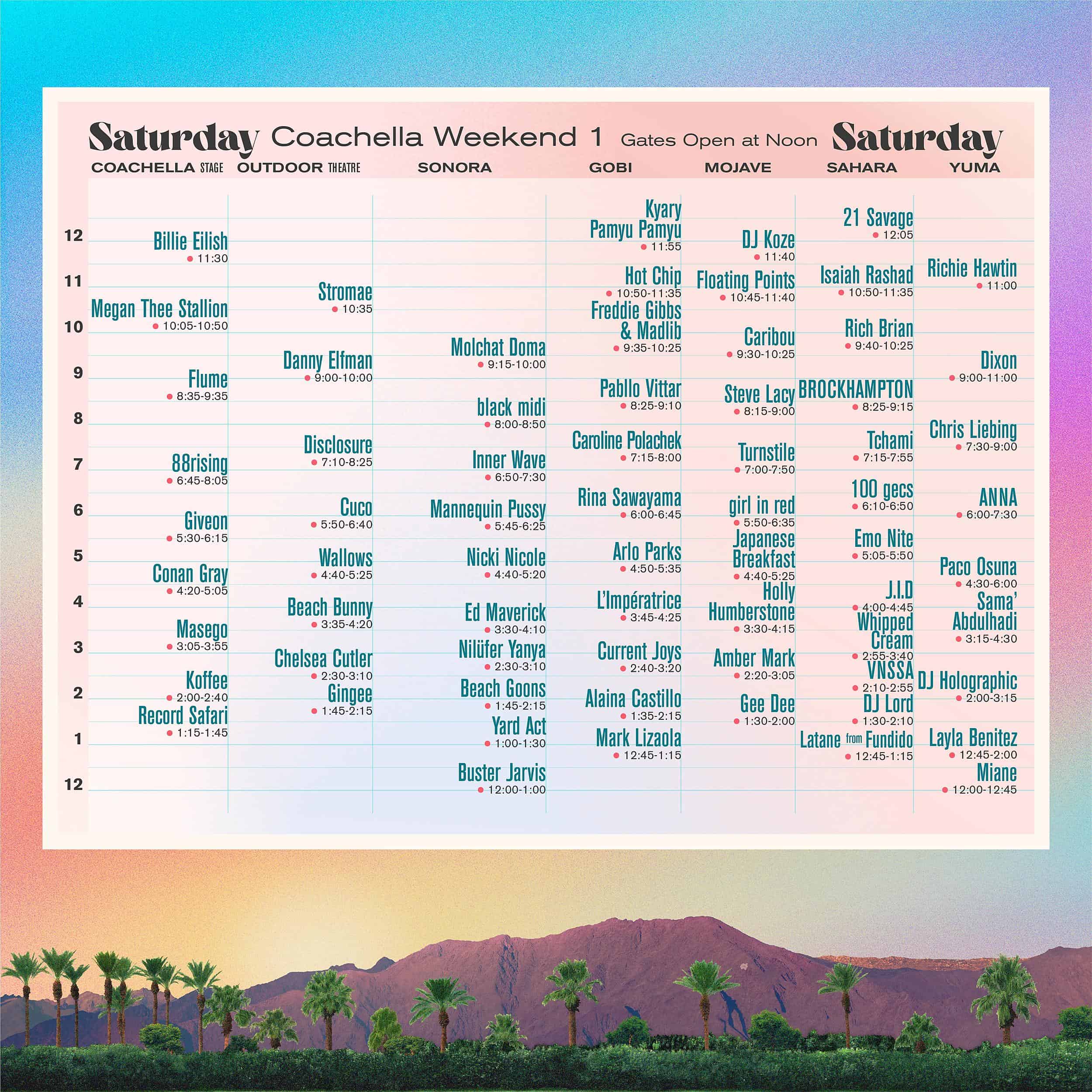 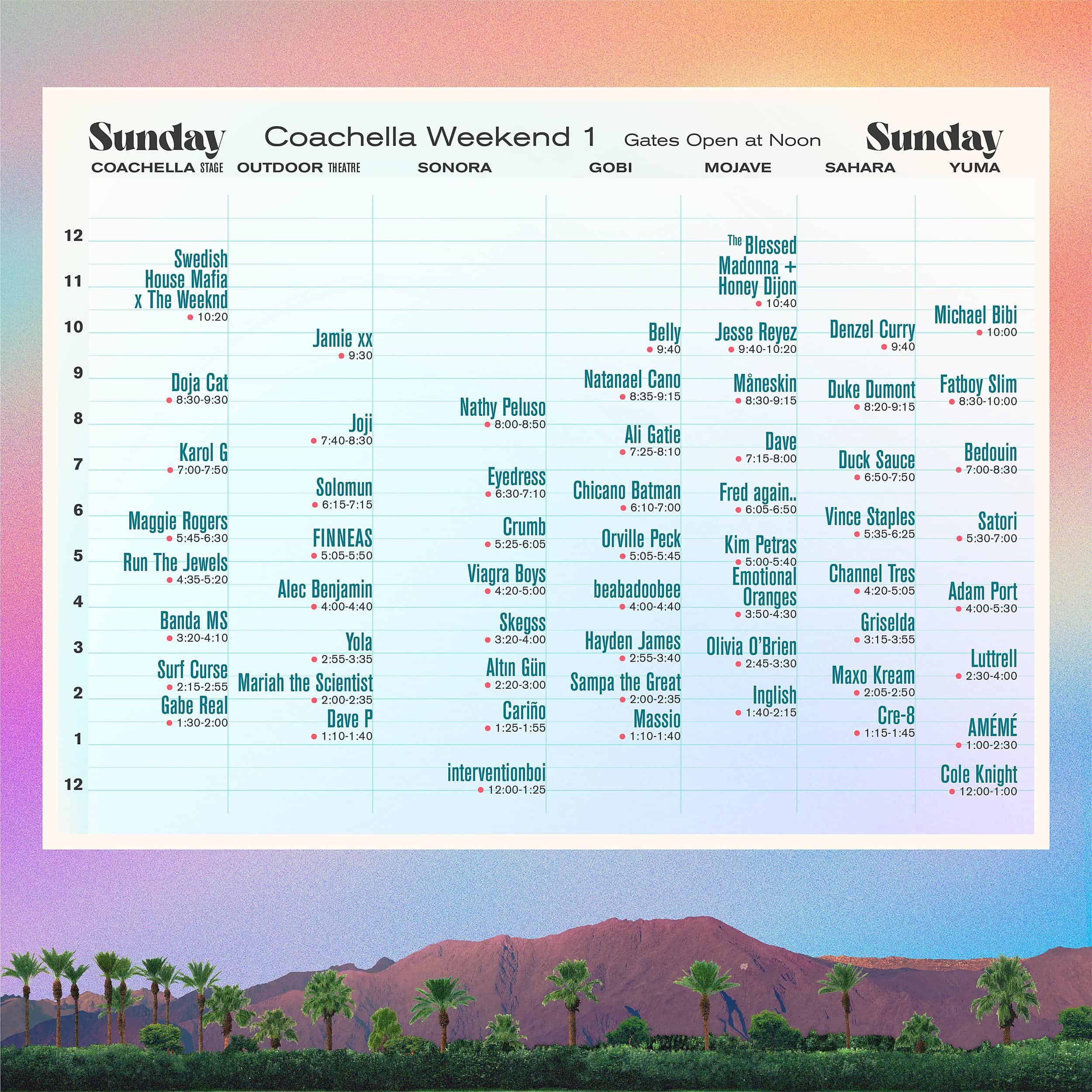