deadmau5 announces ‘We Are Friends’ U.S. tour for last half of 2022

In celebration of its 11th edition of the well-known compilation series, deadmau5 will be hitting the road later this year to bring the U.S. the ‘We Are Friends’ tour that is set to give a concert experience unlike any other.

The idea behind the ‘We Are Friends’ series is to shine a light on the new talent on the Mau5trap label, and the tour reflects that notion as well. The legendary producer is bringing at least nine special guests with him (certain artists to play in select cities) across 15 cities including NERO, Kasablanca, Lamorn, Bensley, BlackGummy, EDDIE, HNTR, LUPA, Morgin Madison and No Mana with more to be announced at a later date. This tour is the first iteration of its kind for the Mau5trap family, so it’s only fitting that Deadmau5 brings out all the stops.

With shows taking place in Philidelphia, Washington D.C., Chicago, Phoenix, Boston, The Gorge in Washington and others, including two back-to-back nights at Colorado’s famed Red Rocks Amphitheater, the ‘We Are Friends’ tour is making sure it gives fans every opportunity to experience this one-of-a-kind event.

However, it wouldn’t be a proper deadmau5 show if there wasn’t an innovative way that people could interact with the tour. As he teams up with MakersPlace for a new NFT drop, the “Ghost N’ Stuff” producer is giving people the chance to get a ‘1 of 1’ piece in a series titled ‘Market Lunchin,’ which will give those owners guestlist access to every single show on the tour. He will also be partnering with Fandiem to give concert-goers a chance to win prizes towards ‘Friends in Miami: The Ultimate Miami Basel Adventure.’ The donations towards the Miami contest will go to the benefit of The American Society for the Prevention of Cruelty to Animals.

Don’t miss out on what is promised to be a monumental tour for the Mau5trap label. Tickets go on sale today, April 28th at 10 am local time on livenation.com.

Check below to see the entire line up of Miami prizes and all tour stops on the ‘We Are Friends’ tour. Check out the Fandiem NFT collection here. 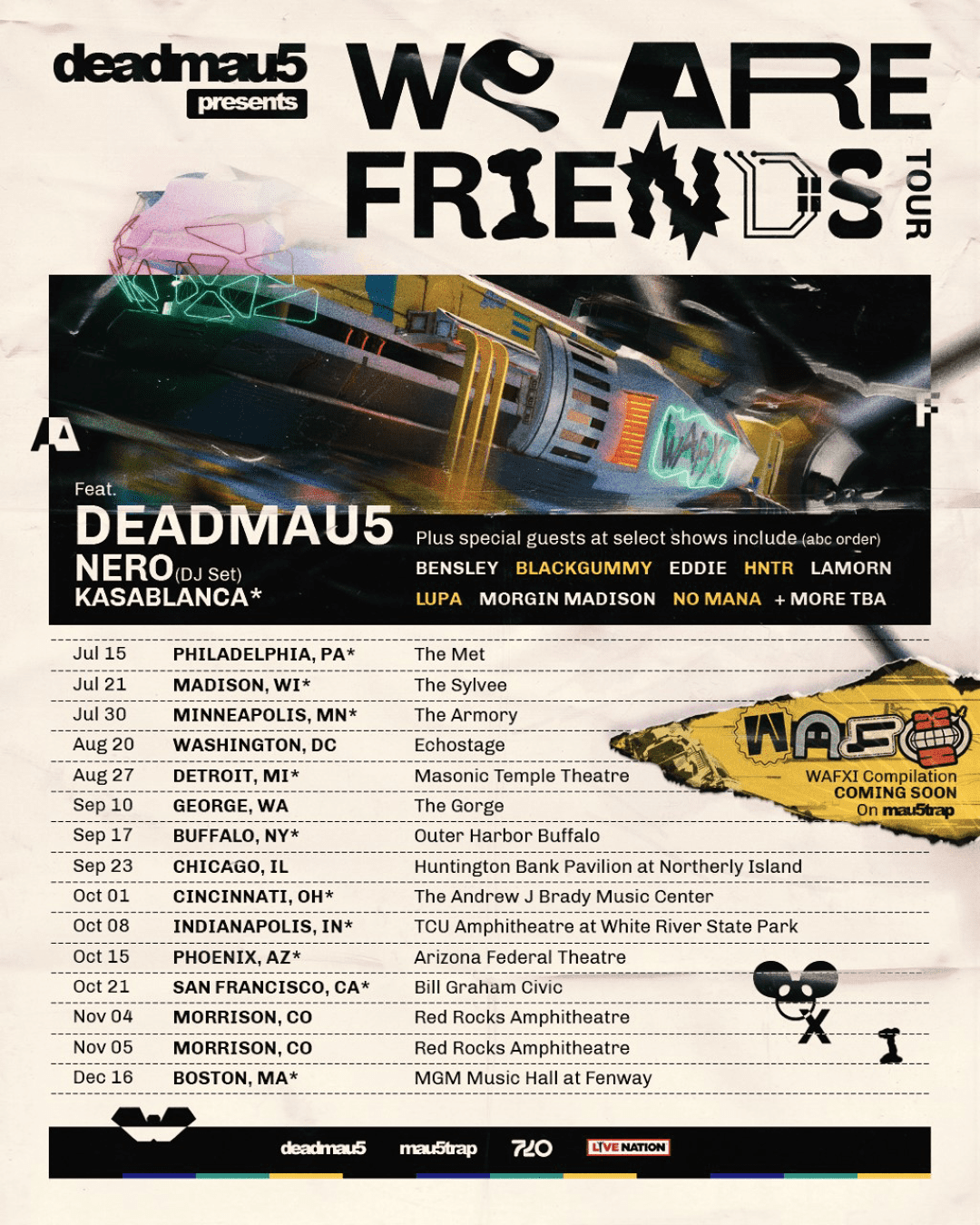 Tags: Deadmau5, we are friends
0