Fatboy Slim announces All Back to Minehead Festival

Fatboy Slim has announced his first ever weekend festival, “All Back To Minehead.” The three day weekend of “love, dancing and laughter” is set to take place November 18th through to 23rd in Somerset at Minehead’s Resort.

The iconic DJ and producer, Fatboy Slim, perhaps best known for showing the world that Christopher Walken really can dance with his ‘Weapon Of Choice‘ music video, just released details for the event which will not include performances from the man himself, but also incredible sets from Eats Everything, Groove Armada, Idris Elba, Jodie Harsh and more! The event site invites attendees to, “Imagine a world without cabs home. A world without boundaries. 6000 souls together as one, sworn to fun, loyal to none.” In a promotional video for the event, Fatboy Slim walks around the grounds at Butlin’s Minehead, surveying the different the stages and claiming, “It is my intention to play as many sets as I’m allowed.” 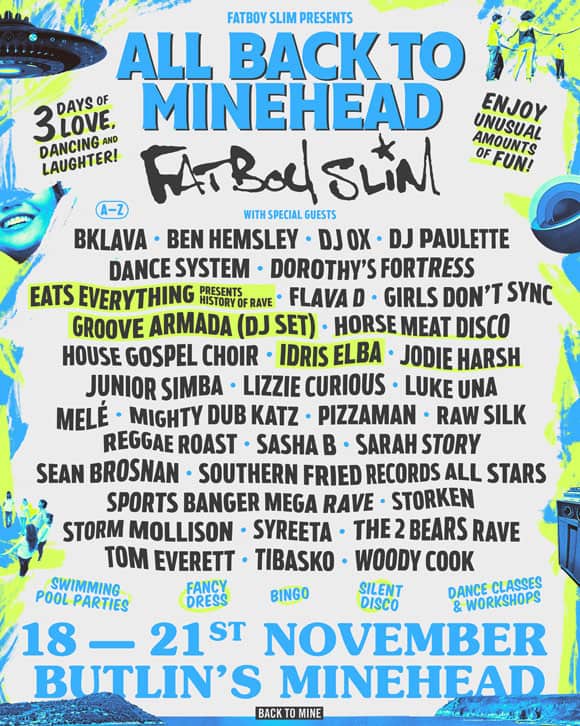 Besides the excitement of Fatboy Slim bouncing from stage to stage, the weekend will also be a major highlight for fans of Groove Armada. The legendary duo recently announced that 2022 will mark the end of their live band show, but fans will still be able to catch DJ sets and this appears to be one of the first dates on their calendar following the conclusion of the 25th anniversary tour. Another unique set will be from Eats Everything, as he will present a “History of Rave” set. Fans can expect to be taken through decades of dance and techno, reliving some of the best beast and grooves produced. Besides the 5 stages guests can also expect bingo, silent disco, dance classes & workshops, fancy dress and swimming pool parties! For more information on the weekend, or to secure passes from £225, visit the website here.

If you’re just curious about what to expect and to get a look at the beautiful grounds, follow the man of the hour himself, Fatboy Slim, as he takes his own tour through the Butlin’s Minehead resort grounds below:

Tags: All back to Minehead, butlin's minehead, Fatboy Slim
0