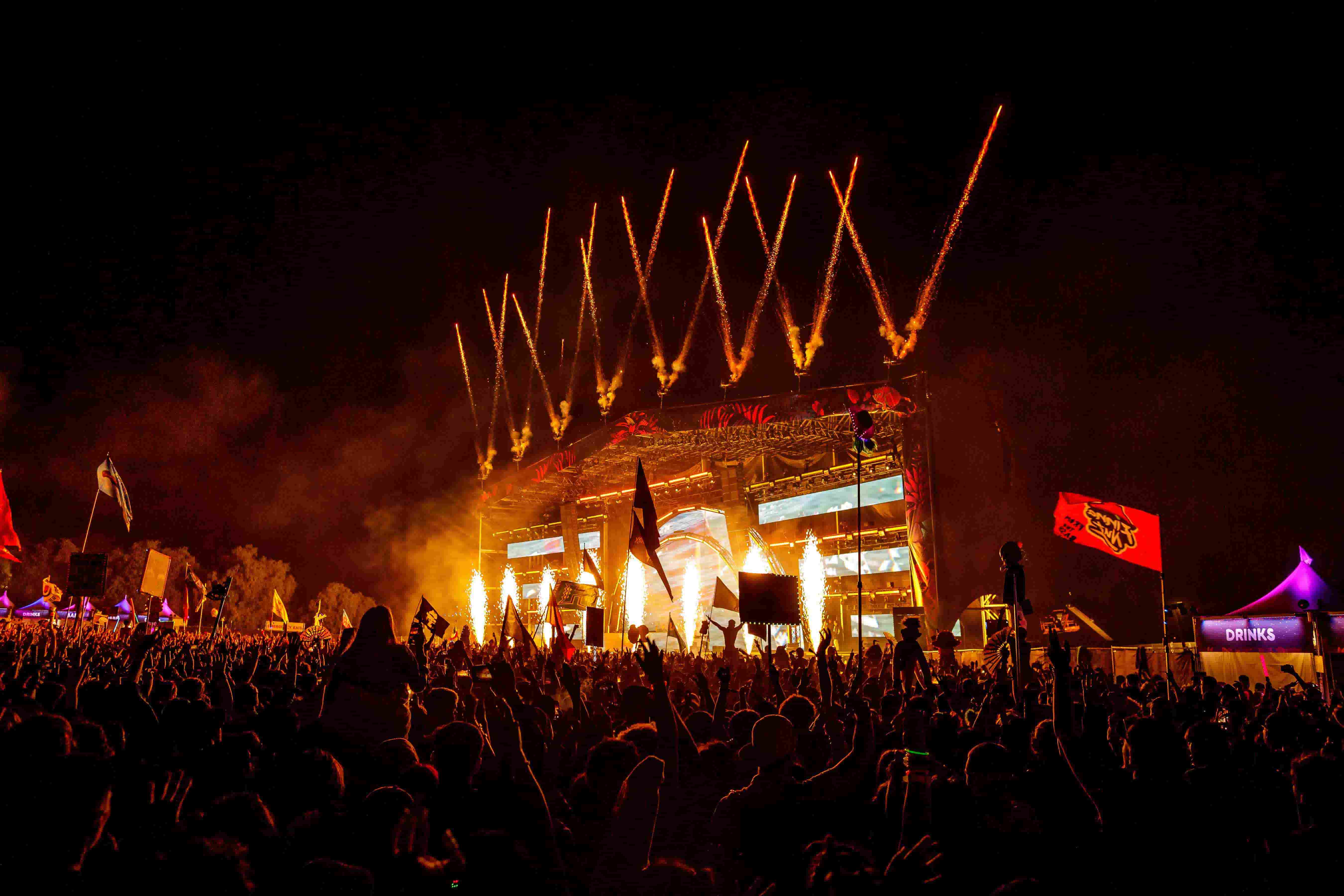 Nocturnal Wonderland, North America’s longest-running festival, welcomed the creatures of the night back home to Glen Helen Regional Park for an intimate weekend packed with stellar performances and an immersive atmosphere.

In 1995, Insomniac Events began a tradition of bringing people together for a weekend full of magical experiences featuring dance music and immersive art/stellar production. Fast forward 27 years and the same remains true to this day. For two epic nights, Insomniac transformed Glen Helen in San Bernardino, CA into a full-on festival experience known as Nocturnal Wonderland. Whatever artists you decided to catch, or if you decided to go with the flow and enjoy the wonderland as a whole, there was definitely something for everyone to enjoy and many positives worthy of a highlight. Read on as we dive into the highlights of our favorite sets and stages at Nocturnal Wonderland 2022! 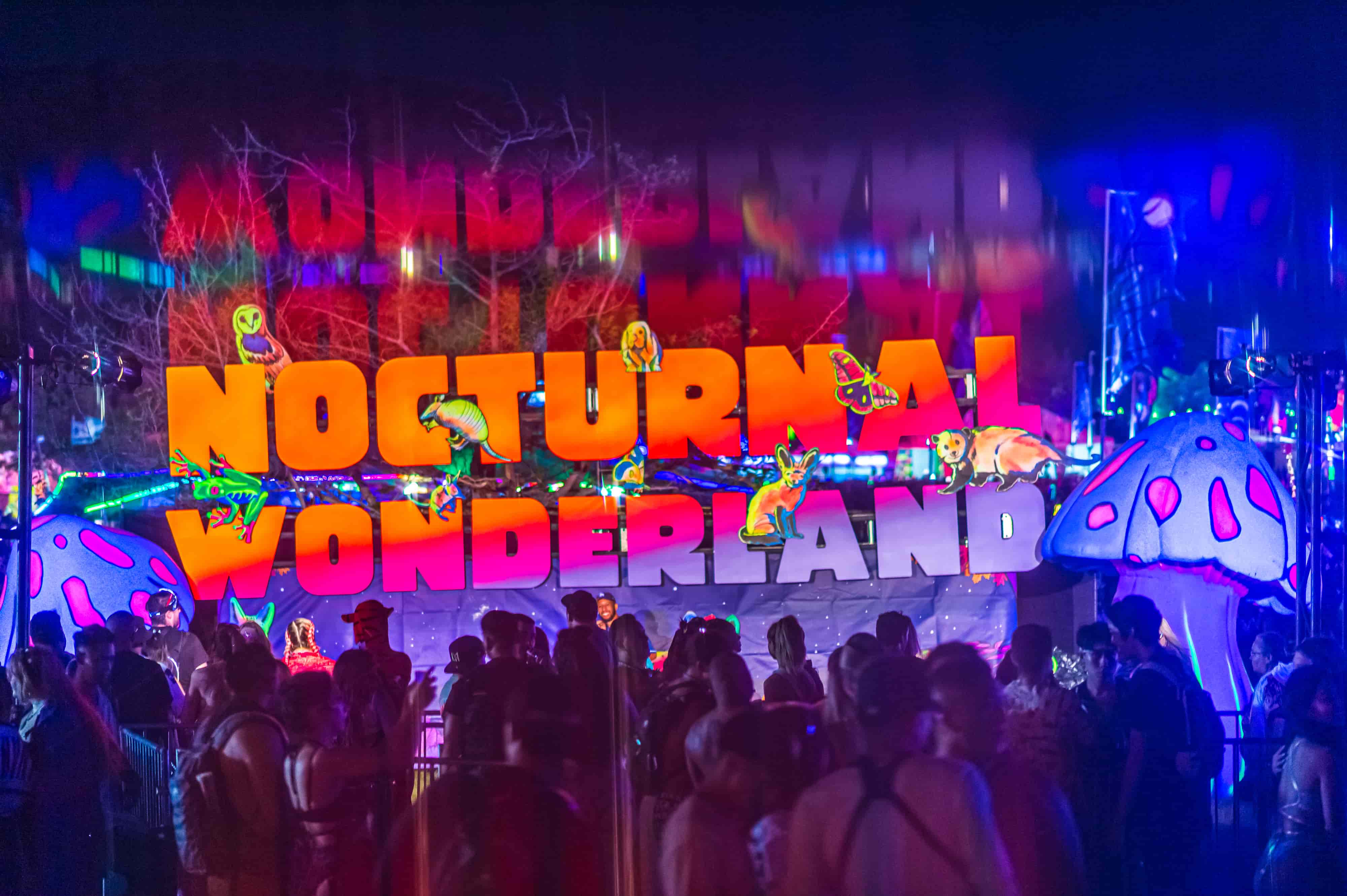 Sets that caught our attention

As the night began to settle in on day one, house/tech-house producer/DJ Westend brought the groovy vibes to the Sunken Garden stage hosted by Repopulate Mars, where he debuted his new single ‘Moderation (At Night)’ with Role-Models and Eluera. As his set progressed through the night, the New York City native began to incorporate melodic tunes into the mix such as Anyma’s ‘Running’ feat. Meg Myers, which triggered a positive reaction from the dancing crowd.

Next up was bass music duo Adventure Club, who brought the heavy dubstep beats to Wolves’ Den, the festival’s main stage. Their performance was one for the books and worthy of a night slot as they mixed nostalgic tunes such as ‘Gold’ with Yuna and their remix of Flight Facilities’ ‘Crave You’ into their new tunes such as ‘LEVIATHAN’ with GRUMGULLY and their unreleased remix of ‘F*ck Your Sunshine’ by Laszewo.

On day two, R3HAB lit up the Wolves’ Den as he spread big-room, future rave and big-room techno vibes to the masses who craved his energy. Being the only one that day with this type of set, it was pretty refreshing to hear some bouncy, energetic music such as R3HAB’s future rave VIP remix of ‘My Pony,’ his ‘Flashlight’ collaboration with Deorro and Hardwell’s new mashup of Afrojack and Martin Garrix’s ‘Turn Up The Speakers’ with Umek’s ‘Dark Market.’

Up next at the Wolves’ Den was American producer Dillon Francis, who picked up on R3HAB’s four-on-the-floor vibes during the beginning of his set with tracks such as his collaboration ‘When We Were Young’ feat. The Chain Gang of 1974 and Porter Robinson’s nostalgic tune ‘Language.’ As he eased his way into his set, Dillon Francis showcased his versatility by transitioning to moombahton and then to his more aggressive bass music style. The crowd was feeling his energy as they headbanged through each song he transitioned into. With energy reaching its peak and little time remaining for his set, Dillon Francis decided to end on a more peaceful and cheerful note by playing his new song ‘Don’t Let Me Let Go’ with Illenium and Evan Giia. 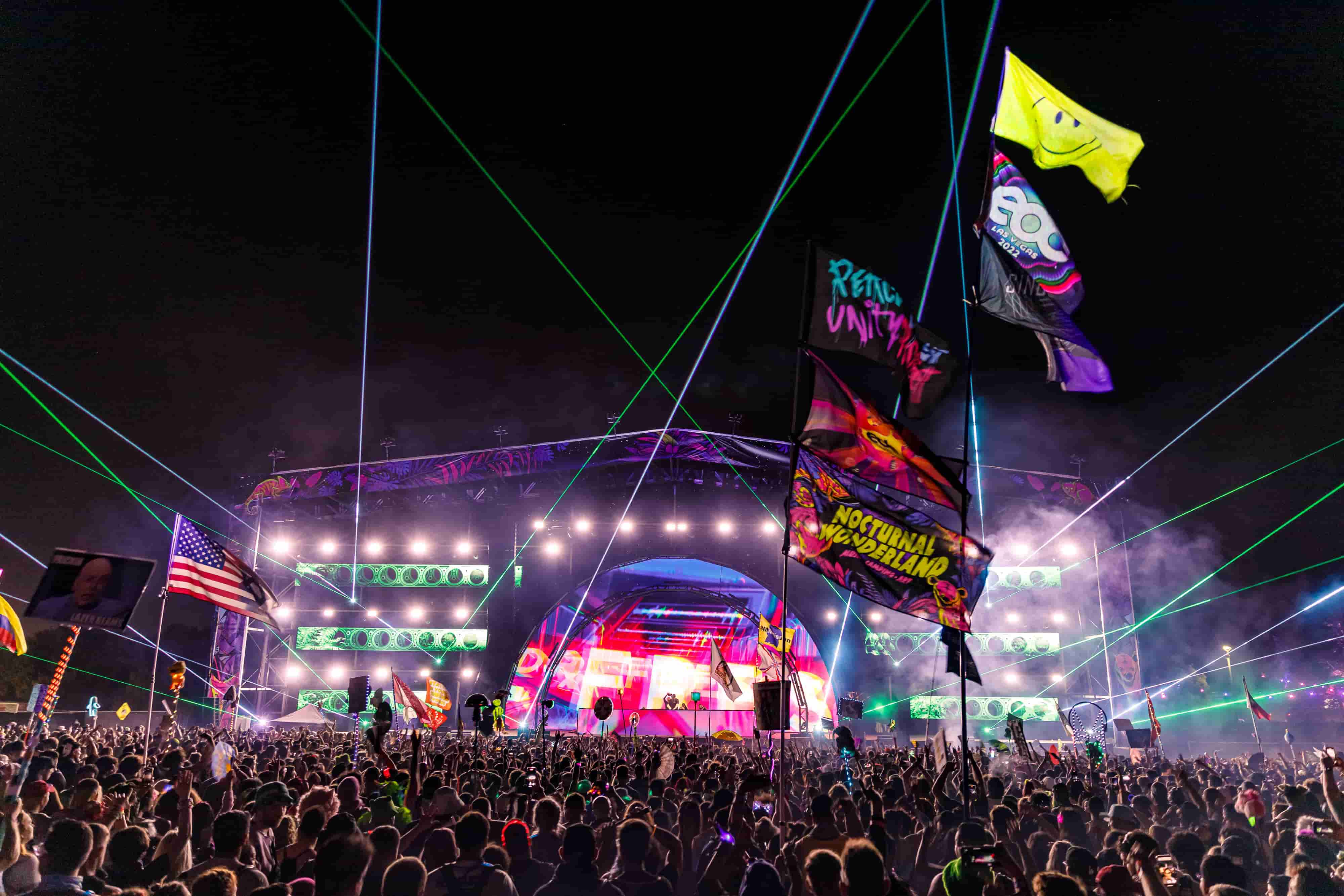 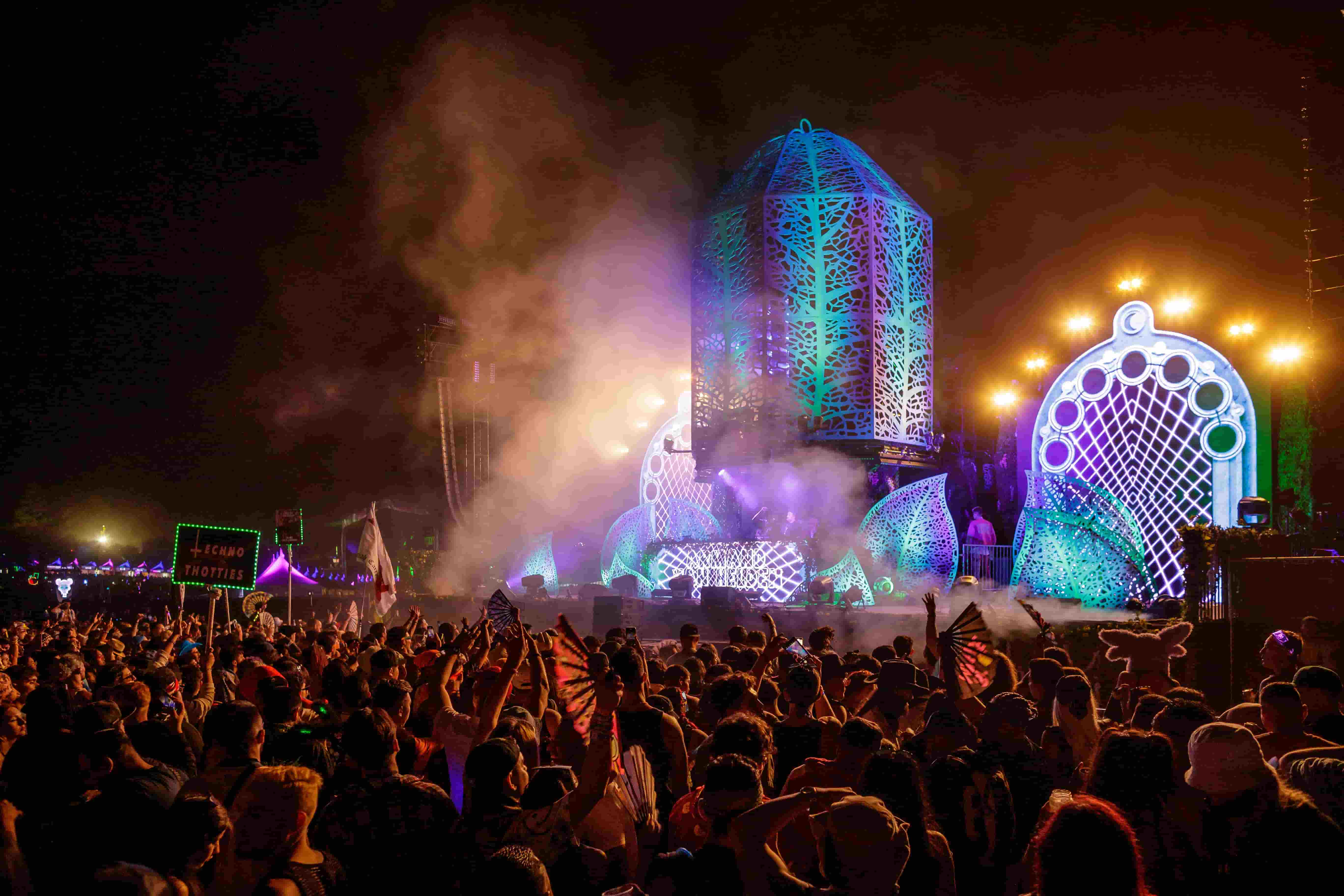 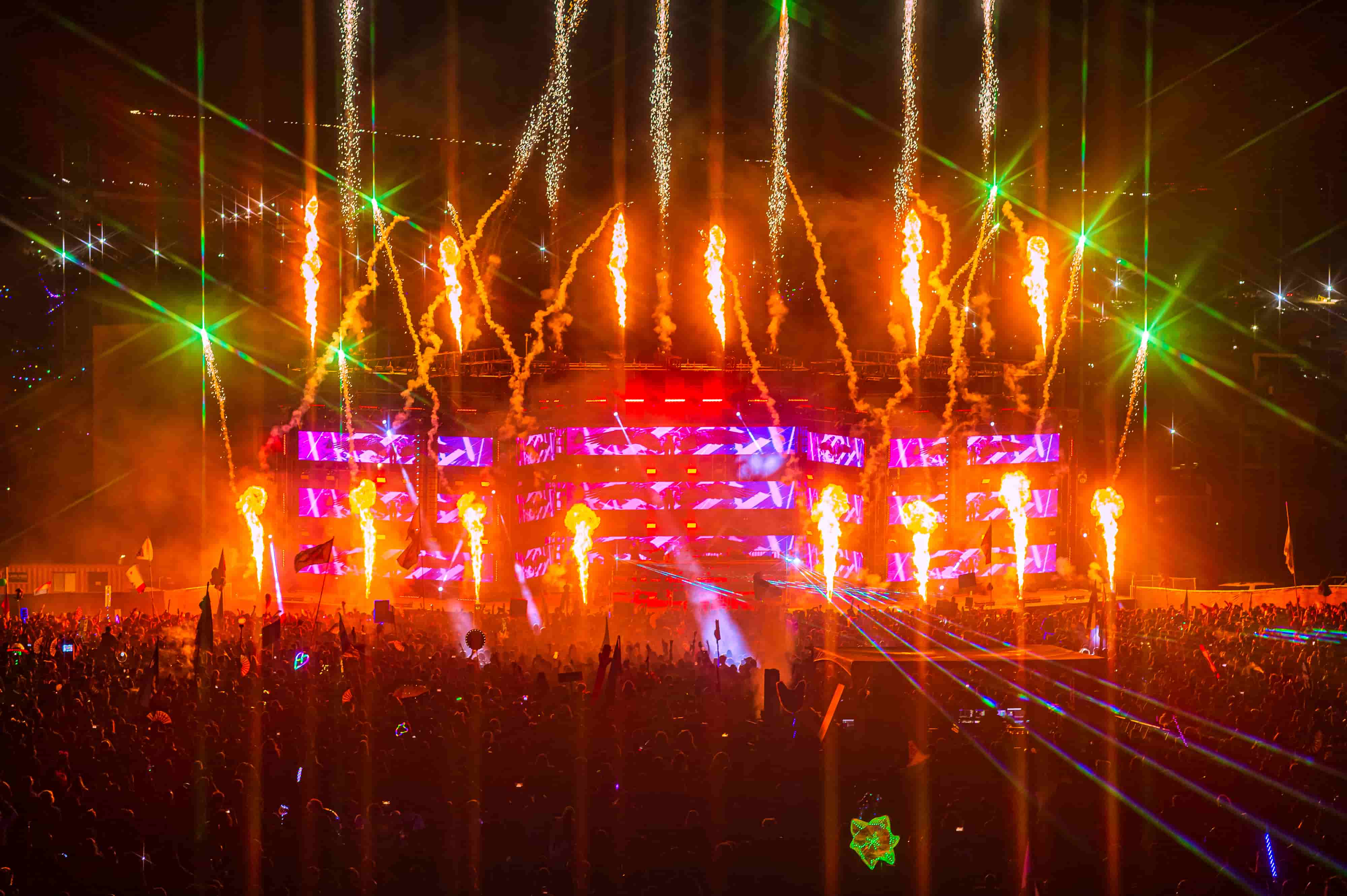 The production at the three stages made for an immersive experience

Although previous versions of Nocturnal Wonderland such as the ones from 2013-2017 were massive in size with four to five stages spread further around the grounds, the three-stage layout better suits the festival logistically, making for a more intimate and less overcrowded experience. One thing is for sure though, the immersive production of the three stages was not completely compromised.

The Wolves’ Den was of main stage quality with its enormous LED half-circle screen in the middle and multiple rectangle LED screens surrounding it. Artists such as Illenium, Yellow Claw, Boombox Cartel, Rezz and Moksi used these screens to their fullest potential as they showcased their amazing visuals during their sets. There was also no shortage of floodlights and strobes as they danced to the rhythm of the night alongside the lasers, pyrotechnics and fireworks.

Sunken Garden, the smaller of the three stages, saw an upgrade this year compared to its layout last year. The new version featured two bigger LED screens and a LED screen in front of the DJ booth that displayed the names/logos of the DJ that was playing. It also seemed to have gotten louder this year as more festivalgoers gathered around to catch performances by DJ Hanzel, Matroda, Armand Van Helden and many other house artists. Although the stage’s visual experience was dramatically less than the other two, that didn’t change the energy that both the DJs and their fans brought.

Located at the top of the hill was the Labyrinth stage, presented by Insomniac’s bass music brand Bassrush. Bass artists such as Peekaboo, Sullivan King, Eliminate, and Wavedash flourished here as their thick beats created the rhythm every headbanger craved for. Much like Wolves’ Den, Labyrinth was packed with multiple LED Screens, lights, lasers, pyrotechnics and fireworks blasting into the sky from time to time.

The three stages are the signature definition of what to expect from an Insomniac event, and that is seamlessly blending art with technology. Although the visual experience was amazing, the audio experience did leave a bit more to be desired. Sound bleed was definitely an issue and at times, a little underwhelming with the Sunken Garden competing against both the Wolves’ Den and Labyrinth. Things did seem to get somewhat better the second day, but this issue was pretty surprising considering that it wasn’t a problem last year. Although there were some hiccups this year, there is no doubt that Insomniac will take care of these production issues for future editions. 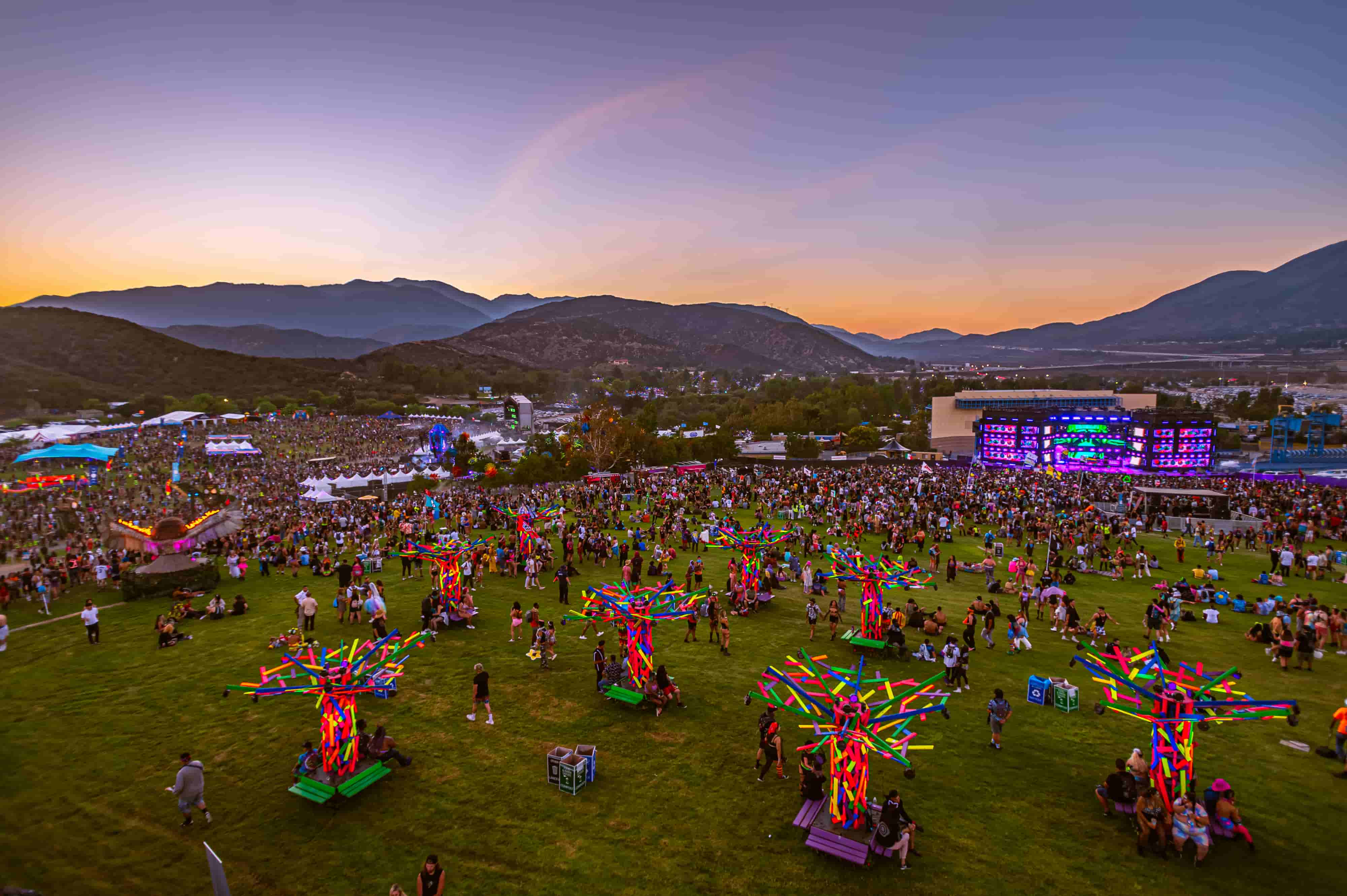 Nocturnal Wonderland as a whole was a positive experience

This year’s edition of Nocturnal Wonderland overall was one for the books. The lineup quality was top-tier like always, featuring some of the hottest acts in the dance music industry that attracted thousands of fans. The sunset leading into the night at Glen Helen made for breathtaking views of the regional park and also foreshadowed that things were about to get wild for all the creatures of the night. On top of that, this outdoorsy atmosphere allowed Insomniac to go all out on production compared to their other shows down the freeway at the NOS Events Center. There’s honestly nothing quite like this festival in the Southern California area, and it should be a top priority for every raver to attend and experience at least once in their lifetime.