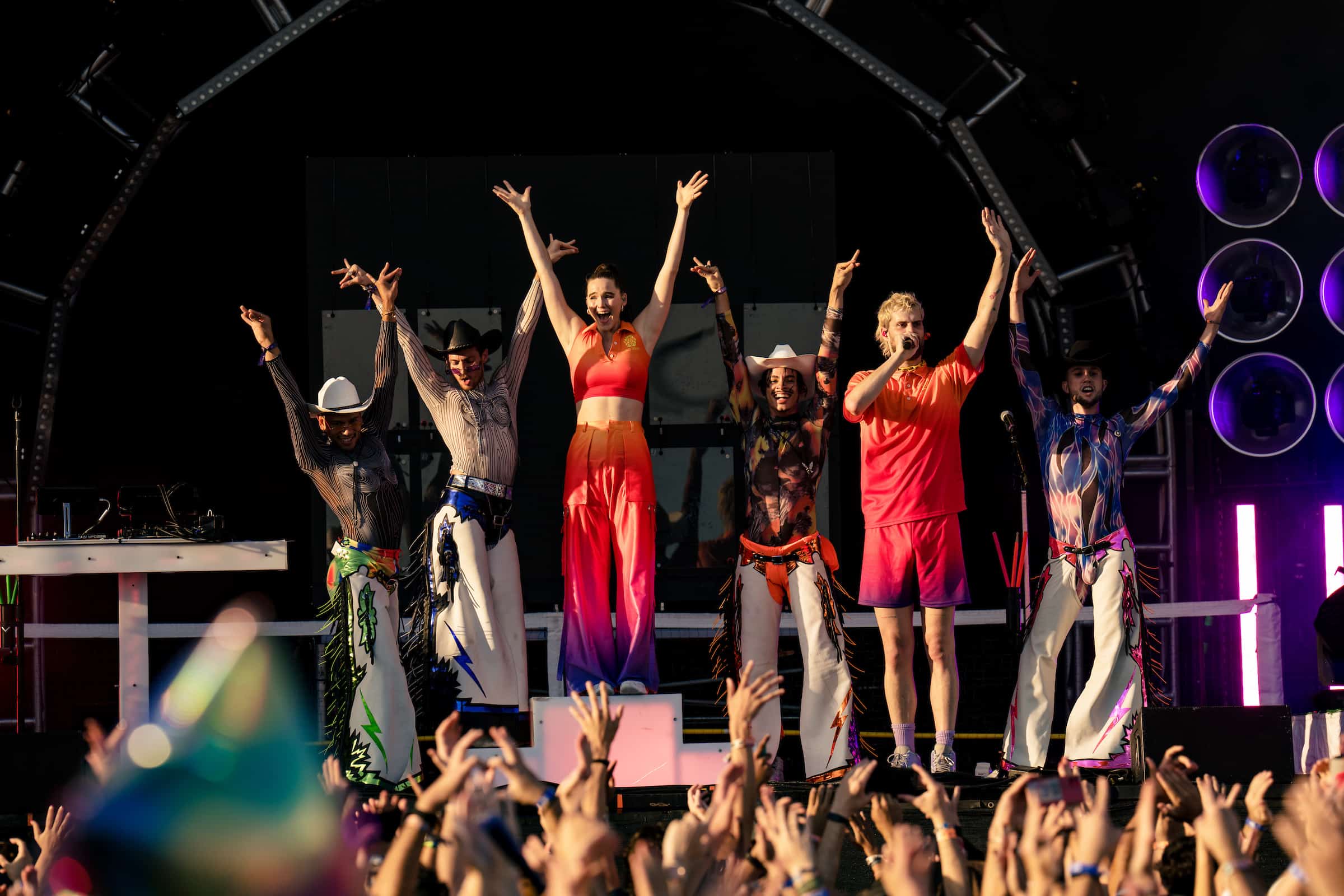 It’s been a magnificent 2022 for duo Sofi Tukker, who have seen their stardom rise to new heights thanks to the success of their latest album, multiple impressive festival appearances, and a memorable promo for the US Open. We sat down with the two before their Austin City Limits 2022 weekend one set to discuss all things Sofi Tukker and Wet Tennis.

Creighton: Do you think that there’s something about Wet Tennis and the inclusivity it stands for that’s taken the excitement for your shows to an all-time high?

Tucker Halpern: I think in general there’s definitely that excitement to get back to it [life before the pandemic], but I think in terms of us, specifically, and Wet Tennis, the whole idea about it is When Everyone Tries To Evolve, Nothing Negative Is Safe- that’s what Wet Tennis stands for- and it was really inspired by people staying positive in the bad times. Not letting the negativity stick to you. To go through that with a relatively positive outlook and get through it and be here, all together- it’s like a feat, it’s more special.

Sophie Hawley-Weld: I think people got this opportunity to really pause and reflect and be like: what’s important to me? What is really not that important? What do I need to focus on when I get back into the world? I think people said to themselves, “I’m going to drop the friendships that aren’t serving me anymore, I’m going to drop the things I thought I needed but don’t have now.

Sophie: Exactly! I think a lot of people have chosen community, joy, dancing, etc. as things that are important to them

Isaac: What’s next for you in terms of exploring world music?

Sophie: Most of the music I love comes from outside of the US, like there’s a song on our album with a Turkish DJ [Mahmut Orhan]– we’ve got a couple other things up our sleeve, but I think that will always be a part of the blueprint of what Sofi Tukker is.

Tucker: The first two songs we released had no English in them at all- it’s just what we like! We weren’t really thinking strategically about it.

Creighton: With the tennis theme and your skill at playing both live and hybrid sets, what do you want the crowd to experience from this live show ?

Tucker: I think the difference between us and other live shows is the participation and interaction- I feel like everyone at the stage, if we succeed, will feel like they were part of our show rather than just watching it. We’re doing a point system, to kind of add competitiveness and give it an unknown ending, which are two things about sports that I love that concerts don’t always have. We’ll see who wins!

Creighton: That’s an incredible way of getting people involved.

Tucker: It’s more fun for us!

Isaac: The two of you have got such a connection to New York City- what was it like doing the promos for the US Open? How did it feel?

Tucker: That was so sweet. We got an email about that, randomly. We were like- “are you kidding me?” We have the song “Summer in New York” on Wet Tennis and they- they even asked us at the shoot, “did you do this on purpose?” It’s the best outcome ever, but like, no! We were there and it was the highest-budget, crazy filming production we’ve ever done. We’ve done lots of music videos, you know, but when ESPN and the US Open are doing it, it’s another level.

Sophie: To be watching the TV and see us up there next to Serena Williams… we were floored. It was very, very cool.

Creighton: It’s got to mean even more to you [Tucker], since you played basketball and now you’re on ESPN for music

Tucker: It’s an amazing full-circle moment. I knew I’d get there one way or another.

Creighton: One thing that really interests me about Wet Tennis is the accompanying fashion line- it’s very colorful, like the album. Is it a bit of a criticism on tennis?

Tucker: I would say it’s more of like, “let’s evolve”, rather than a criticism, cos we have been inspired by the history of fashion in tennis, which has impacted a lot of fashion outside of the sport and vice versa. But the exclusivity of country clubs- you can only wear white to go play- feels outdated, and doesn’t fit in the ethos of the Sofi Tukker world. But we do love tennis, so we wanted to bring it all together.

Isaac: Have you started working on the follow-up to Wet Tennis? Do you have any plans?

Tucker: Oh yeah. We don’t know if it’s going to turn into an album, or an EP, or singles, but we’ve got a lot of new music- some that we’ve had for a long time that we’re figuring out, some that’s new and inspiring and exciting.

Isaac: Are you going to go in a bit of a different direction? Will you continue in a similar manner, considering how successful and fresh Wet Tennis has been?

Tucker: I think we always want to feel fresh, and it will always sound like Sofi Tukker but it will also always be taking some new routes.

Creighton: What was it like when Wet Tennis became a #1 album? Not just for the achievement of getting #1, but also given the message?

Tucker: It felt amazing. We put so much thought and love and attention in every level of this album- we had more time to do that, the pandemic helped in that regard. When it’s received well and people care and like it, it means more knowing how much we put into it.

Creighton: You guys played team sports- do you find yourselves benefitting from that, since you were so competitive?

Sophie: Yeah, I think so. I think being two people is so advantageous- we push each other to be better, we hold each other and ourselves to high standards.

Mere hours later, Sofi Tukker took the stage for one of the most energetic and fun performances of weekend one at Austin City Limits 2022. Their afterparty at Emo’s that same night was just as raucous and joyful, with the two taking full advantage of the more intimate setting to show off their DJ chops.

They really do have people dancing on the people, and probably will for years to come.

Enjoyed our coverage of Sofi Tukker at Austin City Limits 2022? Keep it here for more on the ongoing Texas festival, as well as all the latest on your favorite artists, events, and more!

Next article: Austin City Limits 2022 kicks off another iconic edition in its history with weekend one: Full Recap