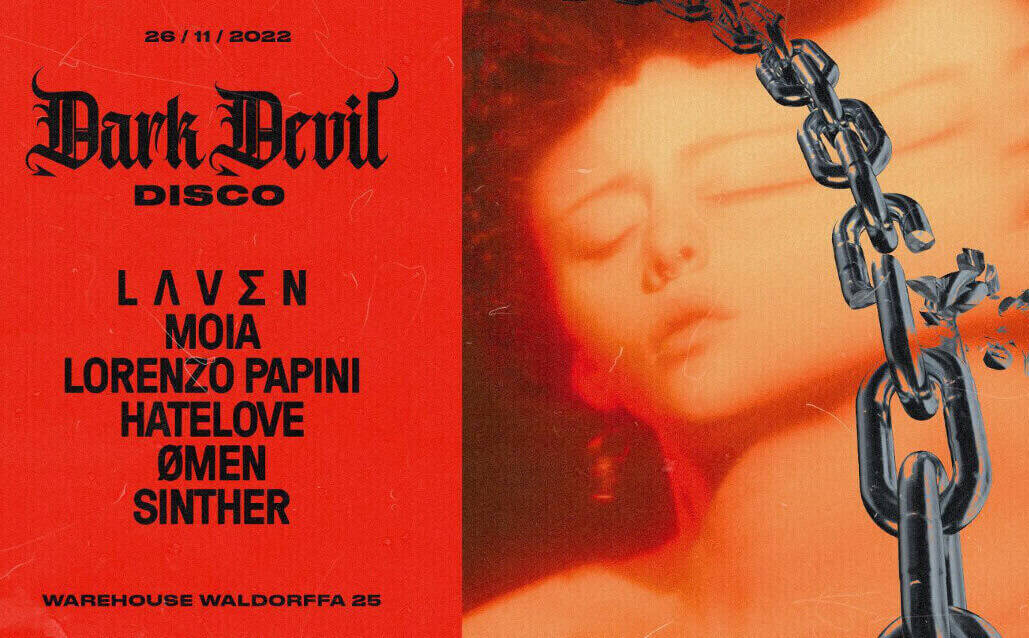 Ensuring the most dazzling techno vibes, Dark Devil Disco has unveiled an immersive lineup for its upcoming event this November in Warsaw, Poland. Leaving no doubt to the imagination, this event promises to be an experience of a lifetime for anyone in attendance.

Returning for its second event on the 26th of November, Dark Devil Disco is set on offering the most hard-hitting side of Techno, as each of the featured artists will be delivering an underground experience like no other. Taking place at Warehouse Waldorffa25 in Warsaw, Poland, this former military building will be acting as the holy ground to what is expected to be a night like no other. With a direct vision “to platform the finest underground artists from around the globe to nurture the local techno scene in Warsaw by championing sounds from the tougher side of techno,” Dark Devil Disco promises to be an event for the ages.

Living up to expectations, the likes of L Ʌ V Σ N, MOIA, Lorenzo Papini, HATELOVE, Ømen and Dark Devil Disco’s very own founder SINTHER, will be ensuring the most scintillating of vibes throughout the night. Paying emphasis to the international culture brought by each of these artists, Warsaw will have the opportunity of witnessing techno in its most immersive of forms, and in turn, everyone in attendance will be in for an experience of a lifetime. Following their core values of Diversity, Inclusion, Equality, Freedom and Respect, Dark Devil Disco acts as a clear tribute towards the techno scene, and its ability of uniting people from all corners of the world, in a bid to run the most mind-blowing of events that anyone has seen.

Shaping up as a truly groundbreaking event, it only makes sense that the lineup would be one that suits the cause in the most distinct of fashions. A wide range of talented producers, each featured artist brings their own style of play to the table, and in turn, Dark Devil Disco promises pure thrill throughout the night. Playing across London and Berlin, L Ʌ V Σ N will be bringing her unique blend of trance, techno and acid in a manner that will have anyone feeling some type of way, and as a resident DJ of GEGEN and WIR, attendees will be witnessing only the purest of vibes during her set. As eclectic as any of the featured artists’ on the lineup, MOIA returns to her homeland of Poland, as her career in music has based her in Berlin during recent times. Implementing a sound that oozes with energy, techno enthusiasts are in for a live show like no other, so be prepared for an intense and emotive ride.

Emerging into the techno scene, HATELOVE acts as yet another artist to watch, whilst his recent releases on SNTS‘ very own label Sacred Court, can only showcase the immense talent that he possesses. Injecting pure passion into his music, it comes to no surprise that his fan base grows on the daily, with the Warsaw-based producer ready to deliver the most electrifying of sets. Bringing his sound for the very first time to Warsaw, Lorenzo Papini leaves no doubt to the imagination, with an array of sounds blending in a manner that have helped elevate his presence within the UK techno scene and not only. Co-founder and resident DJ of MASS, Ømen joins the lineup as one of the elite figures in the UK techno scene, whilst his approach towards the darker tones of techno, will result in a set for the ages. Completing the lineup, SINTHER is the true embodiment of everything that Dark Devil Disco represents, as his eclectic style of play will have everyone begging for more.

Curating the event with the utmost of care, everyone in attendance is in for the most profound of nights, as the organisers ensure a space that anyone can feel free to be themselves, whilst at the same time, getting lost into the darkest beats courtesy of the most thrilling of lineups. An experience that you most definitely don’t want to miss out, you can gain further information on ticket prices, event times, a deeper look into each of the featured artists’ and more, through visiting the official Dark Devil Disco event page here. Will you be joining? Let us know in the comments section.