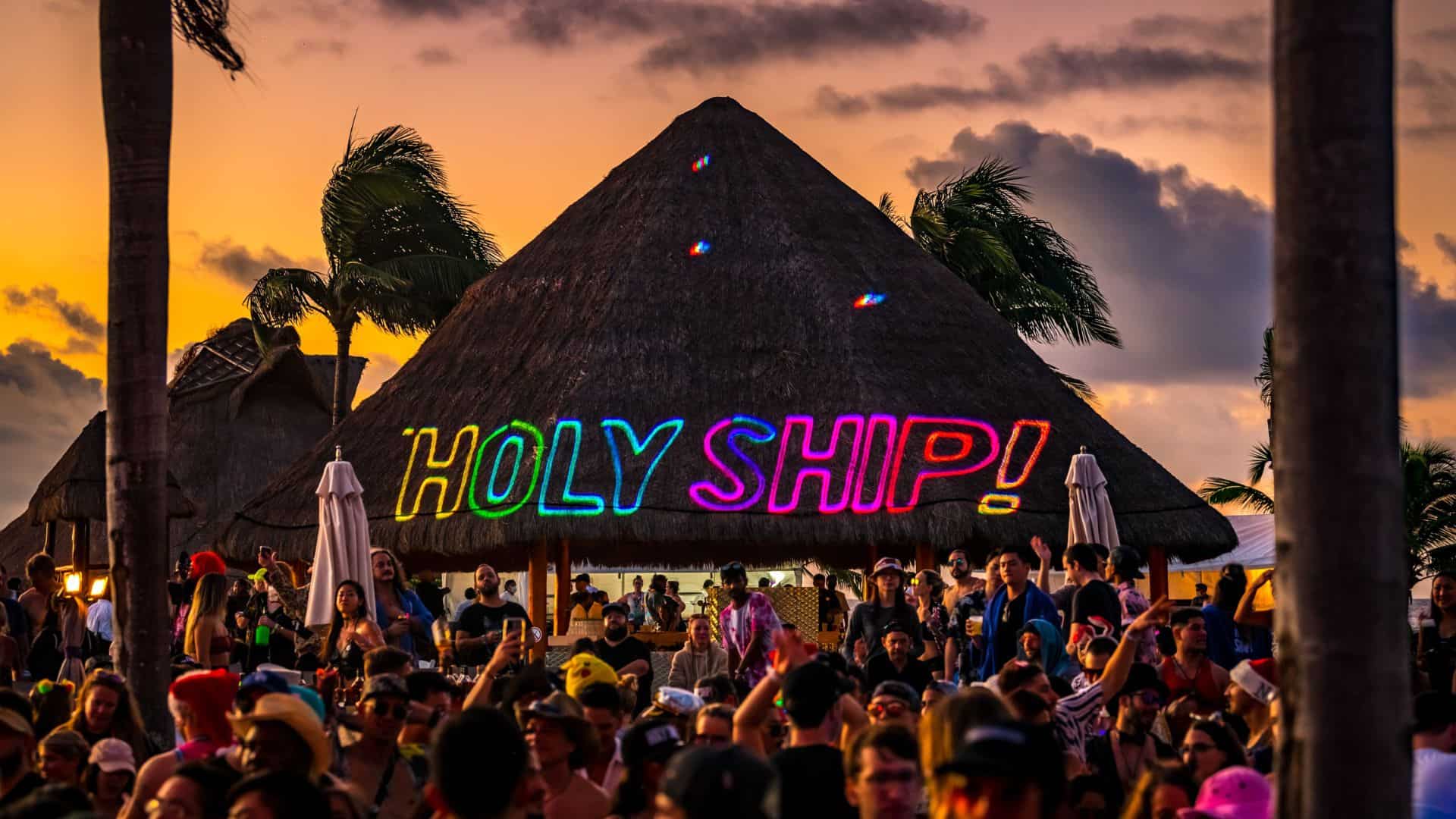 One of the world’s most captivating dance festivals will soon be back in Mexico for another week of great music and epic partying. Holy Ship! might not be sailing the seas this year, but they’re still delivering an incredible all-inclusive resort experience at the Hard Rock Hotel Riviera Maya featuring some of the hottest names in dance music. With just a little over a month away from the start of Holy Ship! Wrecked 2022, these are the top acts you absolutely cannot miss during this once-in-a-lifetime experience.

Australian born and Los Angeles-based, Wax Motif has enjoyed a great 2022- his acclaimed debut album, ‘House of Wax,’ came out on his Divided Souls imprint, and he crushed multiple festivals including Ultra Miami. Wax motif knows exactly how to bring the energy to Holy Ship! Wrecked 2022, and he’s sure to set the dancefloor on fire in Mexico.

A name that’s been on every dance fan’s mind lately, John Summit continues to impress as one of the best young DJs in the game. Hailing from the house capital of Chicago, Summit tore up Ultra and hometown festival Lollapalooza this year with some of the most hype sets you’ll ever watch. He’s the ultimate party DJ, making him a perfect fit for the spectacular celebration that is Holy Ship! Wrecked.

The Australian-born producer has made giant waves within the last three years due to his unique sounds and performances that have reached the global masses. With highly regarded sets at Tomorrowland and EDC, but most recently, his historic two-and-a-half-hour show at the newly redesigned Brooklyn Mirage, the 30-year-old is one of the dark horses of dance music. You most likely won’t hear anything like Dolla’s set the entire event. Truly a one-of-a-kind.

This duo needs no further introduction. Comprising of Dylan Mamid and Zachary Rapp-Rovan, Zeds Dead are now considered dance music veterans and have yet to let their foot off the gas after over a decade in this industry. They are one of the most versatile groups in electronic music, continuing to evolve their sound with each release. From dubstep, drum and bass, deep house to trap, you never know what you will get from a Zeds Dead experience. Their show will be the ultimate sampler. The duo could easily have the best set of Holy Ship! Wrecked.

These two friends have quickly made an impact since their breakout onto the scene years ago. Louis The Child never disappoints and always brings a fun vibe with them along with an enormous amount of energy. One that is a perfect fit for Holy Ship! Wrecked. You can expect to hear sounds and drops you have never heard before during their show. If you are a fan of Madeon, Flume or Porter Robinson, you will love these two.

So Tuff So Cute

No matter what time of the day these two women play, they are ones you can not ignore. Don’t let the name deceive you, So Tuff So Cute will destroy the stage of Holy Ship! Wrecked. While the name might be new, these two artists behind it are no strangers to dance music. The B2B act consisting of the well-known producers, Mija and GG Magree is as hard-hitting as they come. If you want to rage during your stay in Mexico, this is a set you absolutely need to be at.

While she is the newest face on this list, HoneyLuv’s sets are as pure and exquisite as they come. House and techno fans will most likely find her performance one of their favorites of the entire event. The Cleveland native is an absolute show-stopper and will turn heads the minute she hits play on the CDJs. And with her festival debut performance being Desert Hearts back in 2020, this set will be somewhat of a reunion.

Jai Wolf had arguably what many people thought was the best album of 2019 with his most recent full-length project, ‘The Cure To Loneliness,’ and it is no question that he will give the those of Holy Ship! Wrecked a complete show unlike any other artist on the lineup. His DJ set will bring a colorful array of visuals along with a mix of genres from indie dance to future bass. Don’t be shocked if you find yourself in tears at the end of this one.

Wreckno has made a name in the last year as one of the best live performers in dance music. With outstanding sets from this year’s edition of Lollapalooza, Electric Forest and many others, which all featured an impressive amount of choreography, rapping, and, of course, DJing, the 25-year-old brings it all. The amount of detail that goes into their show to give the audience an experience they will never forget is one to be commended. You can truly lose yourself at a Wreckno show and be yourself.

This Los Angeles-based DJ is another “swiss-army knife” on the lineup. VNSSA brings a multitude of genres with her, including mainly house and techno. After her breakout in 2018, she has gone on to rock some of the biggest stages in the world such as Coachella, Hard Summer, EDC and countless others. Prepare to be hypnotized, as her performances are dark and beautiful. And as her song suggest, she is here to bring ‘The Biznes’ to Holy Ship! Wrecked 2022.

This year’s honor of playing the iconic sunrise set in paradise goes to Justin Martin. This moment will be as special as they come throughout the whole week and something out of a movie. No words can do this occasion justice. No matter what you are doing when Martin takes the stage, make sure you drop it and run to be a part of this indescribable moment.

There is not much that needs to be said when you see this superstar duo on a lineup. Their set is guaranteed to be an emotional roller coaster and another contender for the best show of the event. Slander has quickly become one of the A-list acts of the industry and will bring you to tears but, at the same time, have you head banging with your closest friends. Every time the perform, they leave the audience speechless. If you don’t do anything else the entire time you are in Mexico, make sure you are in the crowd when these two take the stage. 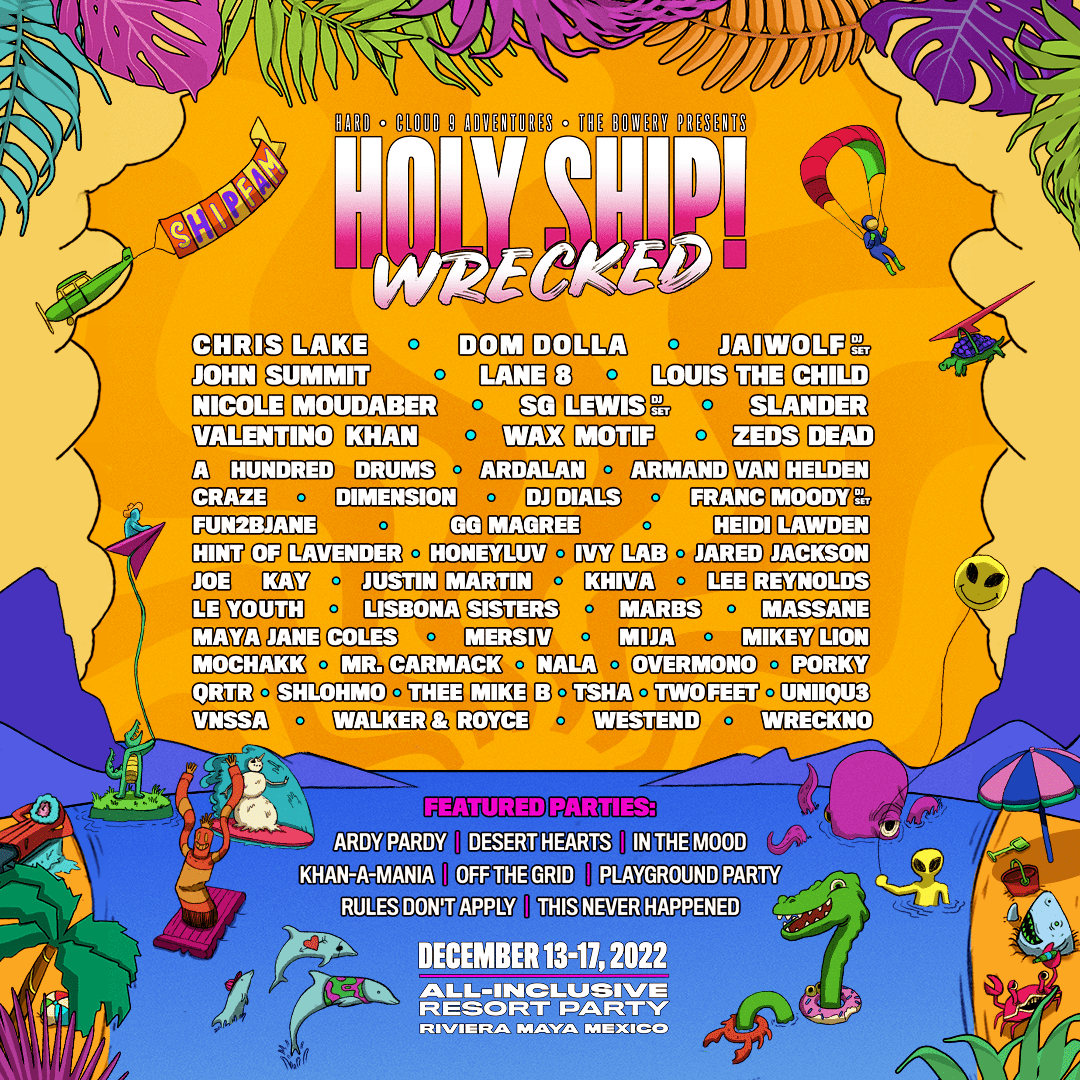