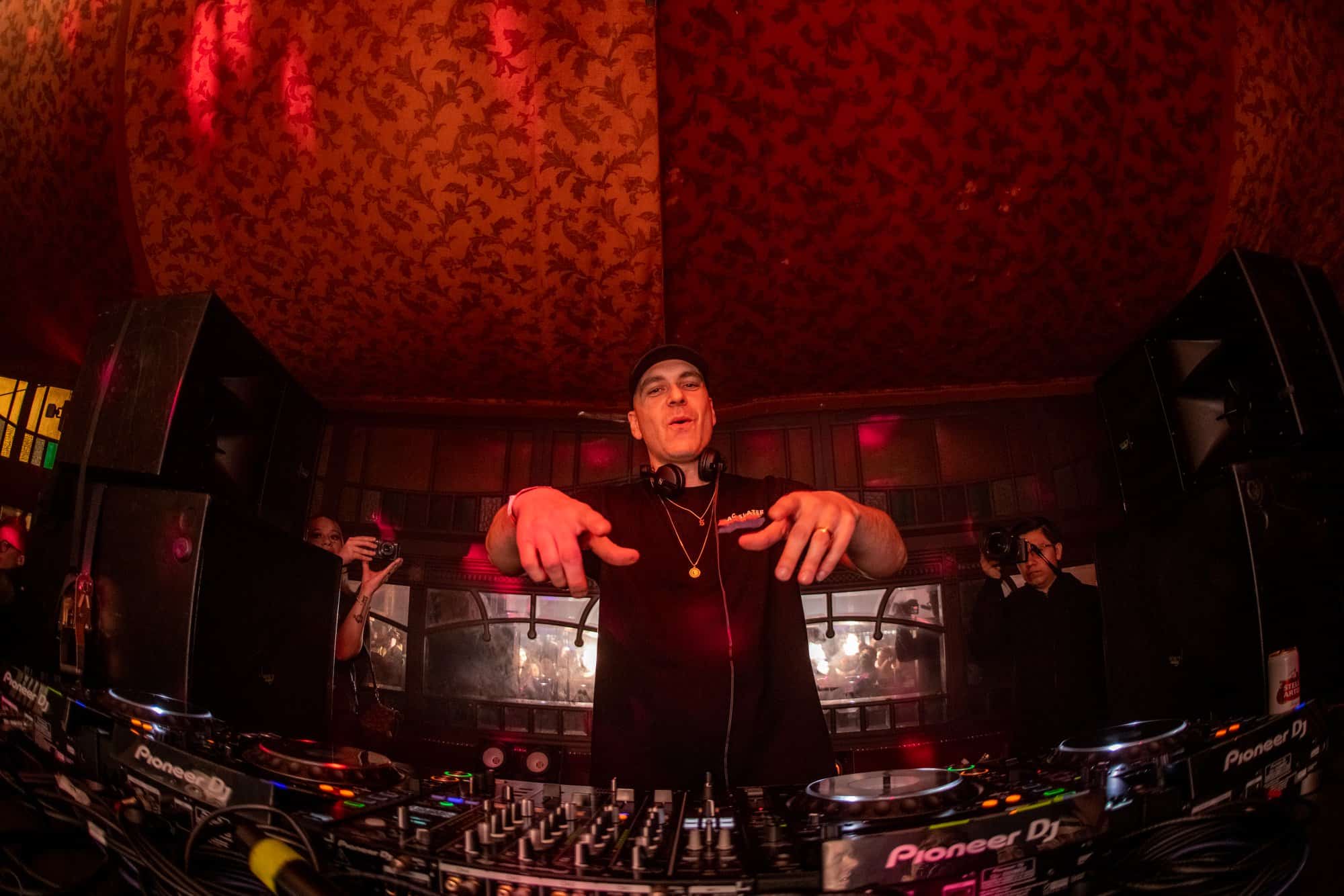 Keeping the groove alive and well, We Rave You is excited to present the seventh edition of our House Music Essentials featuring AC Slater, Matroda, Xandor, Marc Antonix, and Damon Sharpe.

We are back with another edition of our House Music Essentials and let us tell you it is truly stacked for the ears. Riding their own waves in the industry and keeping the groove alive no matter what time of the day it is, our seventh edition includes top-tier artists AC Slater, Matroda, Xandor, Marc Antonix and Damon Sharpe.

With AC Slater recently throwing it down for a Night Bass takeover in the heart of Vancouver, Canada at Harbour Event and Convention Centre, there is no denying the vibes were immaculate from start to finish. With Jay Robinson and SHIFT K3Y heating the dancefloor up from the start, the legend AC Slater took the stage and rinsed out his ever-evolving tunes including “Fly With Us” and his highly anticipated remix of “MAMI” which got the crowd dancing immediately. A true icon and sensei in the music scene, AC Slater is the one we trust to control the crowd and he definitely did not disappoint. Be sure to stay connected with AC Slater here and listen to his enticing remix below.

Many of the greatest artists have their time in the spotlight, but struggle to evolve with the constantly changing music industry. Every now and then there is an anomaly. Someone who can progressively transform their style to captivate their audience no matter what. That someone is the groundbreaking house music sensation known as Matroda. Complimentary to his production ventures, Matroda has showcased his mixing abilities at the top-tier festivals of EDC Orlando and Las Vegas, Nocturnal Wonderland, and many more. This prodigy has blessed crowds at prominent venues as well, selling-out shows in Ibiza, LA, and Sydney. Furthering his campaign as king of the house scene, Matroda has decided to release the final EP for his “Jack The House” trilogy. Starting off with “Wasting Time”, the compilation encompasses another previously dropped house heater, “Temperature”, and four new invigorating tracks. Each song highlights Matroda’s innovation in sound design differently, like his VIP edit of “MOZART” which fuses classical piano with a penetrating bassline. Meanwhile, “MAIN INGREDIENTS” and “BODY MOVE” embody spellbinding vocal cuts and groovy hooks that are guaranteed to burn up the dance floor. In its entirety, “Jack The House Pt. 3” is the epitome of the Matroda’s bright future, along with the future of house. Listen to the full EP below and connect with Matroda here.

Bridging the gap between the modern state of house pop and its future, Xandor is an artistic visionary who has mesmerized the electronic scene with his production. Residing in Boston, Massachusetts, Xandor is the son of one of the greatest saxophonists and has been invested in music from birth. During his upbringing, this young prodigy trained tirelessly in sound design and musical theory. Continuing to dominate the world of house pop, Xandor is back with his 2022 single “Who’s In Your Heart”. Telling the emotional theme behind the track, Xandor shares, “sometimes I wonder if I was truly the person in my significant other’s heart. This song is a story about when trust gets broken and you question your love and relationship, which I think we all have at some point.” Not only has “Who’s In Your Heart” pushed Xandor on a sentimental level, but he challenged himself to work with a rapper as well, hence the feature from the iconic Rapta. “Who’s In Your Heart” wastes no time captivating its audience. The track starts off with invigorating vocals and a deep powerful bassline. Throughout the single, Xandor’s lush synths and soothing melodies are in perfect harmony with Rapta’s lyrical genius. This house pop anthem is guaranteed to be the optimal vibe setter, whether it’s to get down on the dance floor or hitting the beach on a sunny day. Be sure to listen to the tune below and connect with Xandor here.

Xandor – “Alive” (Remixes)
Delivering a brand new perspective on production, rising artist Xandor is at the forefront of the house-pop movement. As the son of a revered saxophonist, Xandor was born into the world of music and his passion was sparked at an extremely young age. Over time, this passion resulted in professional training and years of honing his craft in sound design. Xandor’s biggest recent success is his single “Alive”. Adding to the exposure of the entrancing track, Xandor has now released its official remixes. Sharing his thoughts on the compilation, Xandor says, “I am blown away by the remix pack from these talented producers!” In FER and Basscroster’s remix of “Alive”, a disco-fueled bassline is thrown into the mix, which is certain to light up the dance floor. Next, IVNSKY uses vocal chops and penetrating drums to turn “Alive” into a tech house heater. Lastly, Tony Clarke’s rendition of the song radiates a calming aura and infuses soulful piano progressions. Between the original and the remixes of “Alive” this electronic anthem is the optimal choice to get down and groove to. Be sure to listen to the remixes below.

With an ever-evolving sound like no other, Los Angeles artist Marc Antonix has clearly been making waves this year as he is showing no signs of slowing down anytime soon. Blessing hisglobal fan base with a series of breathtaking releases including “All For You” and his collaboration with Revaeon for “Flashback,” Marc Antonix’s experimental production shines even brighter as he teams up with Latin vocal artist and influencer ARIA. An iconic singer, songwriter, producer, and more, the 23-year-old Los Angeles-based artist and Marc Antonix are \ a match made in heaven for this stunning collaboration on ‘So Fine.’ Released on Intensity
Recordings, the label is driven to find a true balance between releases that can be played both on the mainstage and club settings. Previously released with artists such as SaberZ, Jaxx & Vega and more, ‘So Fine’ is the ideal fit for his forward-thinking label. Starting off with a vibrant slow tempo beat which echos throughout the track, Antonix’s eclectic sound becomes apparent. As ARIA’s soothing vocals flow in perfect symmetry with Antonix’s gentle sound. The stargazing instrumentals begin to echo through the speakers as the tempo rises. Antonix uses a subtle amount of bass to balance with ARIA’s soft voice, initiating a rhythmic groove to the track. Instilling a pure sense of emeotion in their listeners one beat at a time, Antonix’s and ARIA”s personalities flow concurrently throughout the single and we would not have pictured it any other way. This one is about to become a classic. With more surprise collaborations on the way, be on the lookout for more updates from Antonix soon. Listen to the breathtaking collaboration below and connect with Marc Antonix here.

Damon Sharpe returns with his much anticipated new single titled, “Naughty Girl” off of his label imprint, Brainjack Music. “Naughty Girl” sees Damon Sharpe pay homage to Beyonce’s classic hit with a house rendition featuring the talented Tima Dee on vocals. In just two weeks, “Naughty Girl” has close to 100K plays with support from the likes of Afrojack and BPM radio. Damon Sharpe has been making waves for years now and now he returns with his ninth release of the year. As a GRAMMY & ASCAP award-winning producer, songwriter, DJ & recording artist, the dynamic creative has worked alongside the likes of Jennifer Lopez, Ariana Grande, Pitbull, Kelly Rowland, and Alesso just to name a few. With “Naughty Girl,” Damon shows off his impressive production skills with the infectious, “Naughty Girl.” Filled with hypnotic bass, pulsating drums and signature synths, the tune will have the listener unleashing their naughty side with every play. In addition to the single, Damon Sharpe has released a sexy and fun music video starring himself. The music video takes place in a school classroom with Damon Sharpe starring as a teacher in a room of students. Watch the official music video below and stay in the loop with Damon Sharpe here.