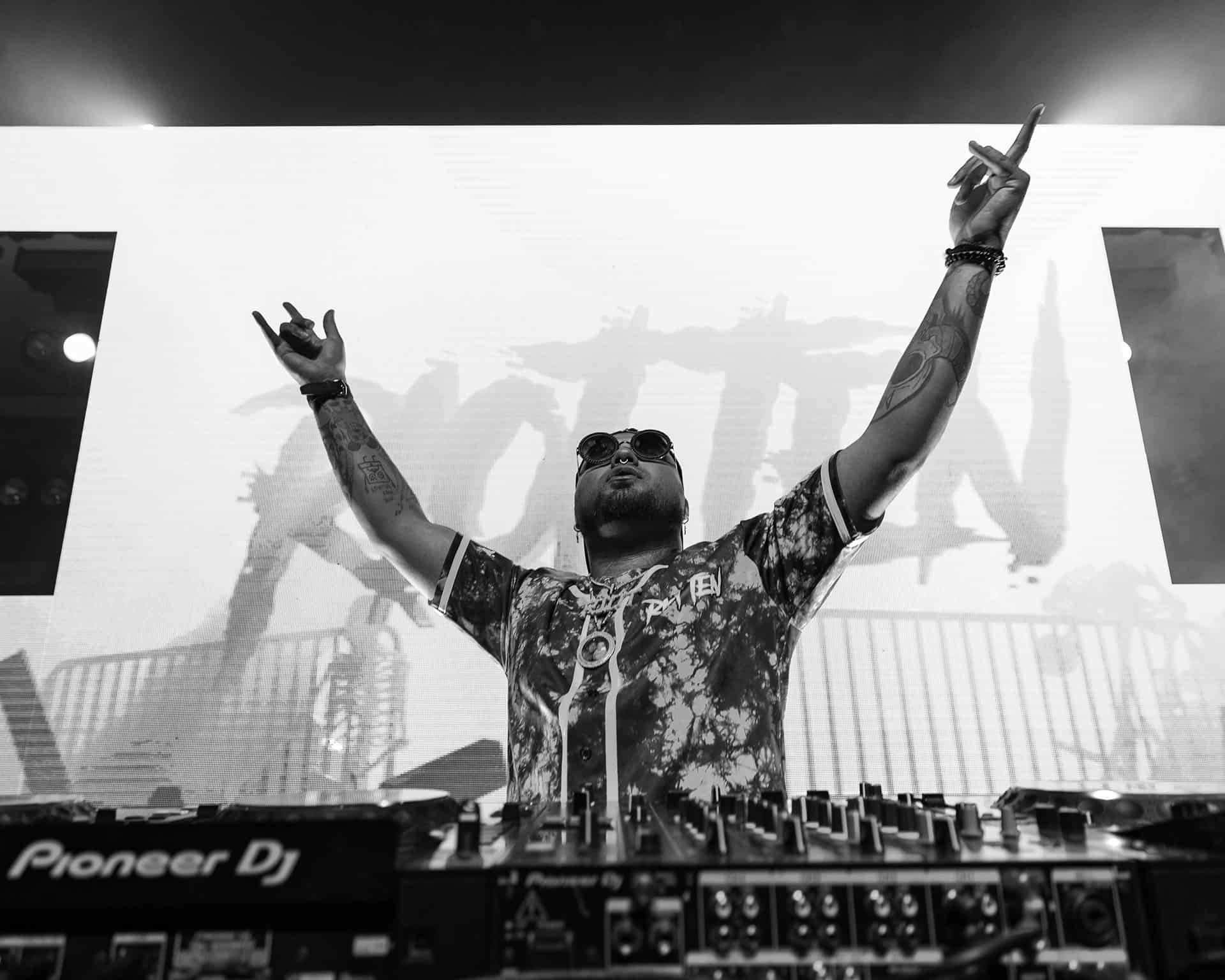 Shining a light on a few of the most iconic artists heating the music scene up a notch as we welcome in the new year, We Rave You presents volume ten of our Trap and Bass Essentials. This month we are exploring the realms of hip-hop, bass, and trap with Riot Got Sauce, MARAUDA, Manic Focus, Phyphr, Au5, Chime, Birthdayy Partyy, Rescve, Asher Shashaty and Worlds Apart.

There is no denying January has been off to a solid start in terms of releases, from hip-hop, trap, and the realms of bass music, We Rave You is excited to reveal the tenth edition of our Trap and Bass essentials with no other than Riot Got Sauce, MARAUDA, Manic Focus, Phyphr, Au5, Chime, Birthdayy Partyy, Rescve, Asher Shashaty, and Worlds Apart. Check out the latest of releases to add to your playlists as these artists are only warming up for 2023.

The name Riot Ten is immediately recognized in the music industry as this bass and dubstep connoisseur has made his mark globally through his distinctive bass-heavy sound while experimenting with hip-hop and trap music at its finest. However, what if we told you the legend is debuting a new alias in 2023? Kicking off the new year on the brightest note, Riot Got Sauce is showcasing his passion and drive to experiment with a wide array of genres with the release of ‘SAUCED’ Vol 1. The six-track album features heartwarming vocals, pacifying melodies alongside an up-tempo twist. Featuring artists such as Kavai, JV Ryhmes, Hashu and more,this talented producer is about to take listeners on a unique journey of true exploration as we dig deeper into Riot Got Sauce’s sonical production capabilities. Providing a taste of R&B, hip-hop and even slow-tempo bass melodies, ‘SAUCED” Vol 1. Is a true piece of timeless art that only showcases Christopher Wilson’s versatility as a music producer. Inviting his fan base into his world of mesmerizing soundscapes, forward-thinking beats, and a selection of distinctive vocals, this is only the beginning for Riot Got Sauce. Stay tuned for more from Riot Got Sauce here and listen to the stellar first edition below.

The Australian-based Hamish Prasad aka MARAUDA has risen through the ranks to firmly establish himself as a force to be reckoned with amongst the elite of the bass world. His debut release “MALIGNANT EP” introduced his malevolent sounds to fans across the globe and spawned the anthems “RIP” and “CASKET” both of which still demolish dancefloors today. Next, he released “DECIMATE EP” “WTF REMIX” for Herobust “DEATH PIT” and his “KING IS BACK” remix for Snails all of which have become a staple in every DJ’s sets. Showcasing a catalog of bangers, chart-topping releases, and consistency beyond his years, MARAUDA is a force to be reckoned with. As he recently kicked off the RAGE ROOM Tour at Celebrities Nightclub hosted by Blueprint Events, MARAUDA absolutely ignited the crowd with energy, and mosh-pits were in full force as he rinsed out both classics and unreleased tunes such as “Wall Of Death” and “Ruckus.” A night to be remembered for sure, be sure to connect with MARAUDA here and check out Blueprint’s latest upcoming events below.

Denver-based producer Manic Focus has many tricks up his sleeve. As a trained magician and seasoned electronic music veteran, the artist has learned how to execute seemingly impossible acts, translating his sleight-of-hand wizardry into vibrant, genre-defying soundscapes. Now, Manic Focus is revving up toward his 7th studio album, Never Not Blue, a new full-length project that sees the producer returning to the blues-inflected electronic style of his earlier work. Having consistently evolved over the past decade, fleshing out his sound to incorporate new approaches to genre, songwriting, and composition, Manic Focus’ new album pays respect to the producer’s original musical identity while retaining the grand, lavish presentation he’s grown accustomed to. In many ways, Never Not Blue is a career retrospective – a look back at where Manic Focus began, and just how far he’s come. Listen to the iconic track below and connect with Main Focus here.

Guitarist/producer Phyphr is one of Denver’s most hotly-tipped talents, making waves with his electro-soul stylings and funky, electronic songwriting. Blending live guitar playing with immaculate electronic production, Phyphr’s vibrant mix of organic and digital instrumentation has earned him the opportunity to perform alongside acts like The Floozies, Daily Bread, Manic Focus, SoDown, and Maddy O’Neal.  Now, Phyphr releases “Still Turnin’,” a bouncy homage to the glory of used record stores and finding musical gems in their dusty bins. Spangled with vintage samples, record scratches, futuristic synths, and original vocals from Phyphr, “Still Turnin’” is a shape-shifting soundscape of freewheeling verve. The track kicks off with a chopped-up, lo-fi piano sample – a central pattern that underlies the entire instrumental. Phyphr then imbues the song with a litany of soul samples before introducing a funky bass line that complements his buttery, effect-laden vocal delivery. Listen to the track below and stay tuned in with Phyphr here.

Following his single “Bring Me Back,” British producer Chime delivers yet again on Monstercat with the release of “The Other Side,” in collaboration with Au5. Since going on the road via a co-headlining Spring 2022 nationwide tour titled The Other Side and rinsing this single during the shows, the anticipation built around this single has been massive. “The Other Side,” is jam-packed full of colorful melodies, and inventive sound design, striking an elegant balance between the imaginative worlds that both Chime and Au5 are so cherished. With a bubbly mix-down and a theme that is easy to digest, these two clearly nailed a single that brings the best of both styles into one track – a record best heard live to be experienced righteously.

Chicago is widely known as a breeding ground for musical talent. The legendary city is also the birthplace of urban blues, modern jazz, house music, and more. With so many gifted artists coming out of the music hub, Birthdayy Partyy has quickly become one of Chicago’s most electrifying duos. Made up of twin brothers Bryan and Jon Gorecki, this pair has taken the house scene by storm with their exotic creations of bass house, drum & bass, and other unique sound design. On top of their eclectic and innovative production history, Birthdayy Partyy is renowned for their jaw-dropping live performances. Already having released official remixes for the likes of Odd Mob, Autograf, and LUZCID, Birthdayy Partyy’s newest project takes their act to the next level. Encompassing emphatic drops and groovy basslines, “Classic V Future is a four-track EP that is guaranteed to sweep house and bass music fans off their feet. The project is a strong juxtaposition of classic house and electronic music elements with modern production techniques and sounds. Listen to the full EP below and connect with Birthdayy Partyy here.

Rescve, Asher Shashaty, and Miyiko are kicking off the new year right with an epic single that beautifully fuses the best parts of all involved into a single cohesive feature. “Urban Forest,” is the fruit of their labor. For Asher Shashaty, this is the first of three singles which is leading to the drop of his debut album he’s promptly titled Astral Spring. The story behind this single begins as Rescve and Asher begin chatting about what could be done to render a truly grand production that also took advantage of both of their musical skill sets. With Rescve’s upbringing as a classical musician and Asher’s ear for experimental sounds, the ground was soon broken on what would become “Urban Forest.” Rescve brought in the first round of chord work and soon all the other aspects began to fall into place. With the instrumental complete, it was sent off to Miyoki who graced the beat with vocals, adding the perfect amount of personality.

In today’s world of electronic music, it can definitely be tough to stand out. This is especially true for rising groups of artists in the bass community. One collective artist that has defied all odds with their groundbreaking style is Worlds Apart. Starting off 2023 with a bang, Worlds Apart is ready to put their newest venture in the spotlight by releasing “Into The Night”. This melodic masterpiece is a dark fairy tale journey that enables the listener to reflect on the “dark” aspects within themselves. Encompassing transcendent vocals from Lesperado, electrifying drops, and a surplus of heavy dubstep sequences, “Into The Night” emulates a chaotic balance that needs to be heard over and over again. As Worlds Apart furthers their ascension to the throne of bass music, “Into The Night” serves as an energetic festival-ready sensation.