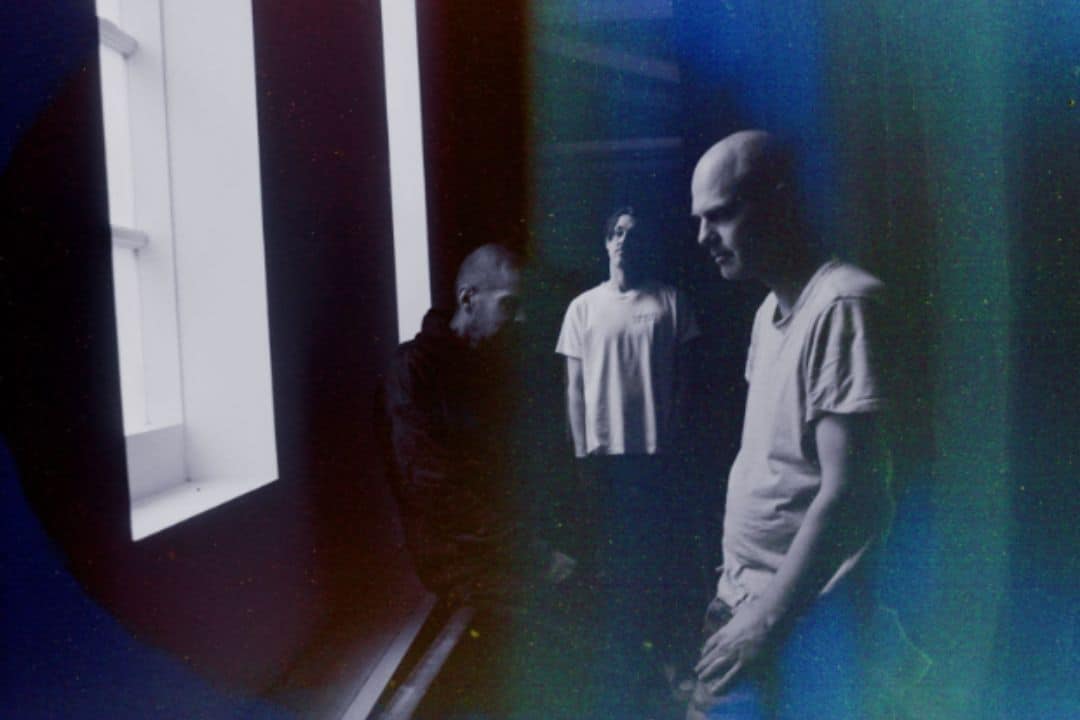 British/Dutch trio Cubicolor is one of the most trending and unique electronic bands out there. Their discography crossed over 70m streams across their first two albums ‘Brainsugar’ and ‘Hardly A Day, Hardly A Night’. Their astounding take on music and amalgamation of electronic and acoustic elements bring something completely fresh to the realm of electronic music. They have received massive support from the community and fellow music makers RÜFÜS DU SOL, Tale Of Us, Dixon, and Diplo to name a few. Having produced countless tracks over the years with no sign of slowing down, the trio now gear towards their brand new record ‘Sometime Not Now’ on October 28 [Pre-Save here]. We recently caught up with the three-piece electronic band comprising Tim Digby-Bell, Peter Kriek, and Ariaan Olieroock to gain more insights into their upcoming album, songwriting process & more.

We Rave You Tech: How would you describe your style and your approach to music in your own words?

We Rave You Tech: With the new album about to come out, it’s safe to assume you’ll go on tour soon- can you tell us about some of the places you’ll play? Any particular festivals? Are any special guests planned?

Cubicolor: We’ve been out playing a few shows this summer and it’s been amazing to play live again and connect with the fans. We’re currently putting together some tours for the start of next year so stay tuned for that!

We Rave You Tech: This is your first project to come out since the COVID-19 pandemic- how did COVID affect the making of the record? Did the social and mental effects of isolation influence the album’s themes? Its lyrics?

Cubicolor: I think it was hard for any artist to not be influenced by the pandemic and I certainly wanted the lyrics to reflect those strange, dislocated times we were living through. But also, as always with Cubicolor, to try and offer some hope and solace through the music. It certainly changed the way we work – not being able to be in a studio together for most of the writing of this record, I had to work hard at keeping my energy levels up writing solo in London, but this actually became really inspiring and creative after a while – being able to exchange ideas across countries quickly, sending ideas back and forth, I was able to really focus on my work and I actually really enjoyed it, although nothing is like all being a room together! 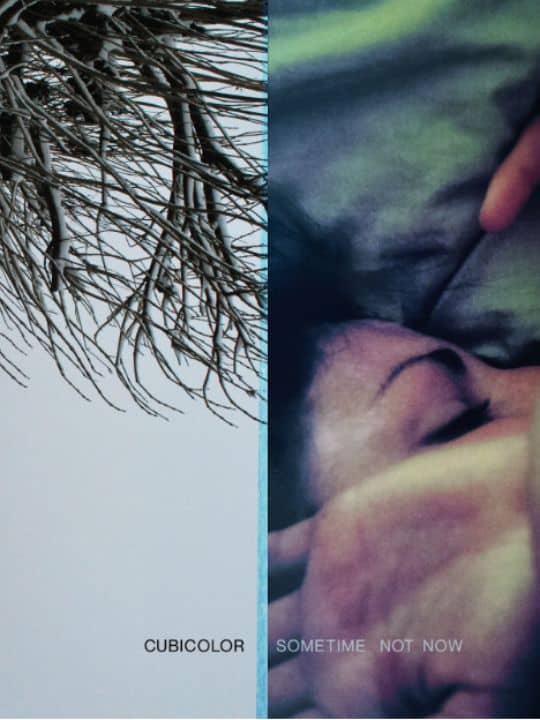 We Rave You Tech: Ariaan and Peter come from completely different musical backgrounds from Tim- how does that affect your collective workflow?

Tim(Cubicolor): we all operate in very different ways, I think, and that’s been a huge asset for our collaborative work. We are each able to bring something different to the table, hear things differently, and very often fill in each other’s gaps. It’s really the thing that makes Cubi Cubi!

We Rave You Tech: The lyrics and tone of “Sometime Not Now” are very pensive and brooding- can you describe the frame of mind you were in while writing these songs? What was the environment like when recording?

Cubicolor: I suppose, like everyone, we were trying to make sense of this seismic change in the world, a time of enforced reflection and solitude, shot through with moments of real joy and hope. As hard as it was to make it was a very cathartic process, and we really hope people can find some comfort and enjoyment from the tunes!

We Rave You Tech: You worked with &ME of Keinemusik for the album’s first single, “Summer & Smoke”- how did that come about?

Cubicolor: This song came about through a series of chats with Andre (&ME) right at the start of the lockdown. We were exchanging ideas and for a while, I couldn’t find anything I was happy with and I actually wrote to Andre and said I was struggling – he wrote back saying there was no time pressure now, we just have to keep going, and he kept sending music over until it all fell into place. We wrote Before the Flood together which went on the Keinemusik album, and Summer & Smoke for ours – altogether a deeply creative and inspiring collaboration! The lyrics for the latter were written from a place of deep isolation, that we all shared at that time. The title was taken from a Tennessee Williams play, a story of two ill-fated lovers who go on this kind of spiritual transformation in the play and never end up in the same place.

We Rave You Tech: It’s been about 6 years since your debut record, “Brainsugar”, came out- how has your process in the studio changed since then? What’s stayed the same?

Cubicolor: Even though we have a lot of different gear now than we did then, the process itself hasn’t changed much. We’re still just playing around trying to find something that sticks. In general, you could say that in this area of combining songwriting with electronic music there is still a lot to explore and we have only just started. There is no ‘How-To’ guide to this which is one of the things that makes it exciting!

We Rave You Tech: In general, how has your gear changed since your last record? Any big differences, or is it mostly the same?
Cubicolor: The gear is always in flux. Things come and go. But our basic setup hasn’t changed. We did get some Neve gear for this album though which we are very happy with. Rupert Neve was a legend, may he rest in peace!

We Rave You Tech: In a 2020 interview (DJ Times), you mentioned that you made your own monitoring speakers! Do you still use them? Any plans to make more, or other equipment, yourselves?

Cubicolor: Yes we still use them! We designed them to do everything we want out of monitors. They are small yet they can fill a good-sized studio room with sound with a flat response from 30Hz up to 20KHz. No subs are needed. Best stereo image ever and the tightest transient response possible. We are currently preparing to make the first batch of these speakers. It doesn’t often happen that musicians have the technical know-how to build what they need as musicians. We feel strongly that products that are built by musicians for musicians, always have an edge.

We Rave You Tech: Tim’s vocals on the new record tend to have a bit of an airy quality to them- how do you achieve that effect?

Cubicolor: Tim is just like a good wine, he gets more of an airy quality each year!

We Rave You Tech: How do you process the vocals? What gear or software do you use?

Cubicolor: We certainly don’t have a set process we use across the board – the song and the vocal performance will always influence the treatment – but having decent compressors, EQs and a nice tape machine is always a good place to start!

We Rave You Tech: Live instrumentation is often subtle in your songs, yet still very important to your overall sound- can you describe your approach to including it in your tracks?

Cubicolor:  We all like playing instruments, songs usually start with only a piano or a guitar. I guess when we produce the songs we automatically go for a nice blend of synthetic and organic parts.

We Rave You Tech: You’ve previously spoken about using a 1972 Stratocaster for the guitar parts- do you still use that particular instrument? Can you tell us about the specific effects (pedals, plugins, etc.) you use to color the guitar sound?

Cubicolor: Yes she is still with us! For that guitar, we usually do not use a lot of processing apart from some delays and a bit of verb. The magic about that guitar is that it sounds good all by itself. It doesn’t need much help at all!

We Rave You Tech: What are your absolute favorite pieces of gear?

We Rave You Tech: What are your favorite/go-to plugins?

Tim(Cubicolor): big fan of the BABY audio stuff, the Softube Weiss ones, and shout out to Synplant!

We Rave You Tech: Do you already have any plans or ideas for the next record/project?

Cubicolor: Yes. It’s a strange thing in music that by the time people hear your album you’re already well into the next one. Stay tuned!

We Rave You Tech: What advice would you give to aspiring musicians?

Cubicolor: Try and write as honestly as you can – and above all else, keep going! Persistence is such an important quality you can have as an artist; so just focus on your work and don’t let anything stop you. Never stop learning!

That’s all for the interview with Cubicolor. Their album “Somtime, Not Now” arrives on digital platforms on October 28th. Follow Cubicolor on Instagram to stay updated about their latest releases. Also, make sure to keep an eye on We Rave You Tech for more such content!