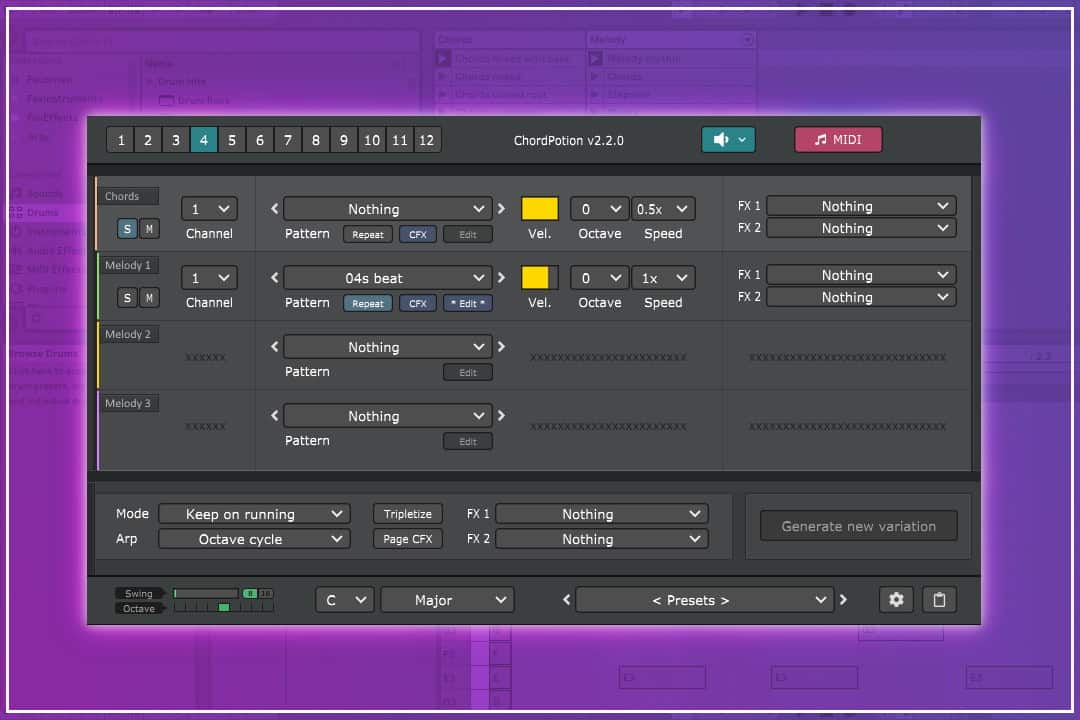 Dresden-based FeelYourSound makes a variety of songwriting software and guides, with everything from free-scale lesson packs to sophisticated production VSTs. ChordPotion, a tool that effortlessly turns even the dullest chords into moving musical parts, could very well be the jewel in their crown.

ChordPortion is a relatively simple concept with some very cool technology behind it: take a straightforward chord progression, plug it into the software, and watch as it transforms your basic chords into full and lush melodies and phrases played on your synth of choice. You adjust the playing style (i.e. change octave or speed) or switch between pre-existing or user-made presets to get the exact sound you’re looking for. Generated notes can be exported as MIDI instantly- you can quite literally drag and drop them right after they’ve been made.

Making your own presets is challenging no matter what software you’re in, but FeelYourSound has done an excellent job here in making a tough task easier and more enjoyable. The interface is set up with four different rows- chords, melody 1, melody 2, and melody 3. For each one, you choose a harmonic rhythm pattern (ex. a simple four-step beat, an eight-step backbeat, etc.) which repeats the selected line according to the rhythm you’ve set for it. Options vary from everything to standard four-on-the-floor style beats to a range of pre-made variations, but for those who need more control, don’t worry- you can go in and make your own. Pressing the edit button will bring up a sequencer that allows you to go in and tweak the rhythm to your heart’s content.

This software is a great tool for pretty much any producer- beginners could build from its quick transformations to breathe life into parts that might not have a full or rich enough sound, and more experienced producers can take inspiration from ChordPotion’s random generations, or- better yet- utilize advanced features like the “possibility” sliders (a feature that lets you randomly make notes go sharp or flat, change to another note, play at a different velocity, and more) and tailor interesting and unique melodies or phrases in one of the best sequencers in VST plugins. ChordPotion can be used to create different musical phrases. Be it arpeggios, basslines, chords, or piano phrases, ChordPotion does all this flawlessly and with ease. The best part? It’s got a price tag that both pros and bedroom producers won’t be having any problem paying. ChordPotion also can import a bunch of high-quality free packages directly from this webpage.

ChordPotion is available on the official FeelYourSound website for the low, low price of just €45 ($52)- you can also download a free demo if you’d like to give the plugin a try before purchasing. Watch the video below to see everything ChordPotion has to offer!

Next article: SØNIN Breaks Down How He Made “Titan”: In The Studio with We Rave You Tech