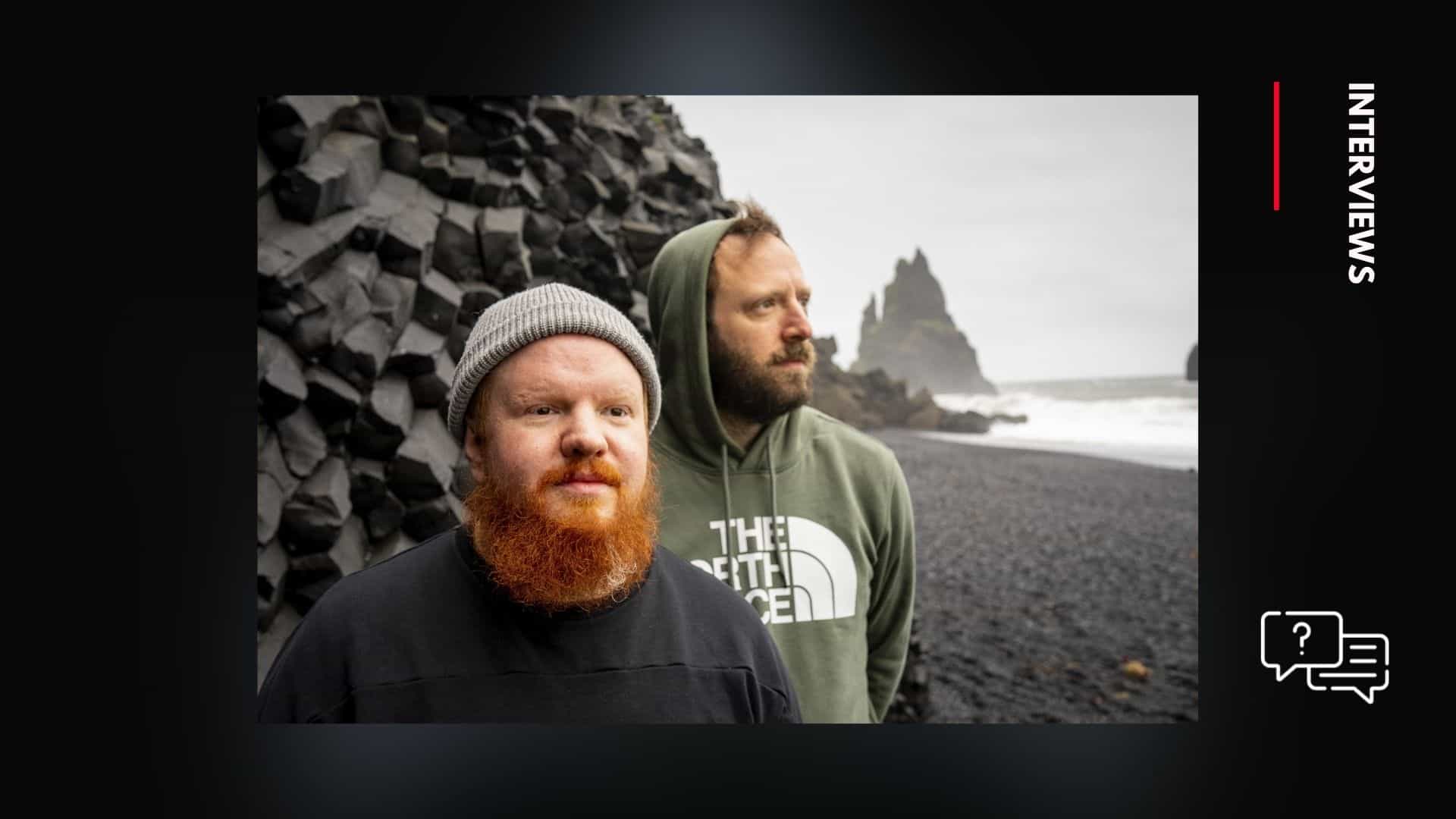 gardenstate, the melodic multi-genre duo of Sweden’s Marcus Schossow & American-born Matthew Felner have been creating some buzz in the industry with the release of their latest album “Inspirations”. Boasting a strong command over their music production skills, the duo after getting together in 2019 quickly garnered the support of artists such as Above & Beyond, Joris Voorn, Yotto, etc. landing them releases on their respective labels Anjunabeats, Spectrum & Odd One Out. One of the major highlights of both Marcus & Matthew’s discographies is the versatility in their music. The same is evident in their debut album as the tracks seamlessly flow from one genre to another knitting a perfect storyline. the gardenstate sound is an amalgamation of ‘90s trance nostalgia, brooding melodic techno, peak-time breaks and poignant songwriting. To discuss more about their debut album & music production process, We Rave You Tech recently had the pleasure of catching up with the duo for an exclusive interview.

We Rave You Tech: Hi gardenstate, thank you for taking the time to speak with us! Where are you currently located?

gardenstate: Thank you yourself, currently sitting in Helsingborg, Sweden!

We Rave You Tech: gardenstate is quite a unique name. How did you come up with it?

gardenstate: When me and Matt discussed the name of the project we had a few names on the table, but this friendship started in the state of gardenstate and we felt it suited the vibe we are.

We Rave You Tech: Since when have you been making music & how did you get into music production? When did you decide to dedicate yourselves fully to the music?

gardenstate: It is no secret that I (Marcus) do all the music. But we bounce ideas back and forward to each other since we share a passion for it. But I started about the age of 15 (21 years ago) and I’ve always known that this is something I want to do. I’ve been a full-timer in that aspect since I was 21 years old. I’ve been releasing music through every possible label out there for the last 16 years including Size, Revealed, Axtone, Spinnin, Armada, and so on but It’s only recently where I found my home, and that is Anjunabeats. They have been incredibly supportive of my creative freedom which has led me to do the things I love, and out of love comes great things! I have much to thank them for.

We Rave You Tech: Your latest album, “Inspirations” just came out via Anjunabeats. Can you walk us through the inspiration behind the album and the process?

gardenstate: The album production kinda just happened! There was no plan or no timeline, I kinda just went into the studio focusing on making the music and then came out with a bunch of tunes that then later became an album. I think that’s the best way to approach music, just to let it all flow out of you. It’s easy to get stuck in something if there is a plan and rely too much on input rather than just going for it.

We Rave You Tech: What’s your favorite track of the album?

gardenstate: On a technical aspect I really like ‘5am’, the melody is just something different and the sheer details in it is immense. Mastering wise I think ‘The Best Part’ sounds incredible, but that’s teamwork between me, Igor and Vladimir (our mastering guys at Anjuna). They both have done an incredible job without colouring the vision of the sound too hard.

We Rave You Tech: Name a music producer you’d like to collaborate with, and why?

gardenstate: In a parallel universe I’d like to go into the studio with Charlie May, James Holden and Trentemøller. These 3 amazing talents have been the strongest inspiration to my vision of how I want the music to be like.

We Rave You Tech: Your recent releases have been quite diverse ranging from melodic breakbeat to trance to progressive house to acid etc. How do you envision the same while writing the track?

gardenstate:  Most of the time it’s just about a vibe or a memory. Most of these songs are memories put into music, something that I’ve experienced and then later want to recreate in my own way and version. We both like all sorts of music, so being diverse as we have just been a natural process. It’s easy to argue that a sound of an artist should be that “one” sound, but the vision for us is that the vibe is our sound, not the sound itself.

We Rave You Tech: Do you make your drums from scratch or prefer using sample packs? In case you use samples, currently what are some of your favorite/go-to sample packs?

gardenstate: I pretty much do everything from scratch, even the hi-hats etc. That way, in whatever way I do it, it will always for some reason sound unique. I’m not a massive fan of sound banks because it makes everything sound the same and it bores me to death.

We Rave You Tech: Arrangement, Sound design, Melodic structure, Mixing, Mastering. Rank them on priority for you.

For the single reason that a song still can be amazing even if it sounds less great.

We Rave You Tech: What DAW are you currently working on?

gardenstate: Ableton 11. I’ve been on Ableton since v6 and the reason is that I can very quickly get an idea down in it. The speed is important, not to lose the flow of the wave of ideas.

We Rave You Tech: Melodies are one of the core elements of Trance and progressive music. How do you write your melodic structure? Do any one/both of you play any instrument?

gardenstate: None of us really plays any instrument, as boring and strange as that might sound. But I play the melodies in my head and then I try to translate that into the sequencer. It has always been my issue but it’s also great because happy mistakes can happen 🙂

We Rave You Tech: Throughout the album the drums punch through the mix nicely. How do you usually process your drums?

gardenstate: Thank you for noticing. It all starts with a proper mixdown and then the right type of compression. Most people compress the drums to death and then wonder where all the transients went. The various SSL racks out there do a great job to get the peaks out in the mix. For me, I always start the mix down around the kick and make sure it’s clear throughout the mix.

*Note: For user convenience, we have added relevant links to the mentioned tools.

We Rave You Tech: What are some of your favorite synth plugins/kontakt libraries?

gardenstate: All the things from u-he and Plugin Alliance do are amazing. My sound literally got better with these two companies doing the incredible job they do!

We Rave You Tech: What are some of your favorite mixing & mastering plugins?

gardenstate: I don’t do the mastering myself on my own projects as I, by nature, lack the proper perspective to do it since I’m emotionally attached to the music. It’s like a relationship, you sometimes only see the good things but fail to see the reality of them. Again, I think the SSL racks out there do an amazing job to make things cut through.

We Rave You Tech: Do you possess any analog gear? If yes, which ones and what do you use them for?

gardenstate: Loads, I love them! On the album, I used a Moog Sub37, Moog Voyager, Erebus Dreadbox, and a few other fun toys. For me, the analog just comes with dynamics and depths. Have you ever heard the sub for a Minimoog? You can’t replace that, no matter how hard you try. There is just something magical to it that translates so well into the sound I’m trying to achieve!

We Rave You Tech: “Inspirations” counts as your first album. Did you discover anything new or develop any new skills in the process?

gardenstate: Never switch laptop during an album process…. that was the first painful skill I learned haha! But I think I started to use less and less extreme processing on things, and that comes from watching how Igor and Paavo work.

We Rave You Tech: How was your experience playing at the massive ABGT 450?

gardenstate: It was unreal. It felt like 5 minutes because your head cannot possibly process every impression that it gets. About halfway through I had a little man tear because it meant so much to be back.

We Rave You Tech: What advice would you give to upcoming music producers?

gardenstate: Don’t listen to anyone, you do you and do it the best way possible. And be street smart, you are about to enter one of the roughest businesses in the world if you don’t have your head on straight you will be eaten up alive. Welcome to the jungle!

That’s all for this interview!

Check out gardenstate’s album “Inspirations” down below: