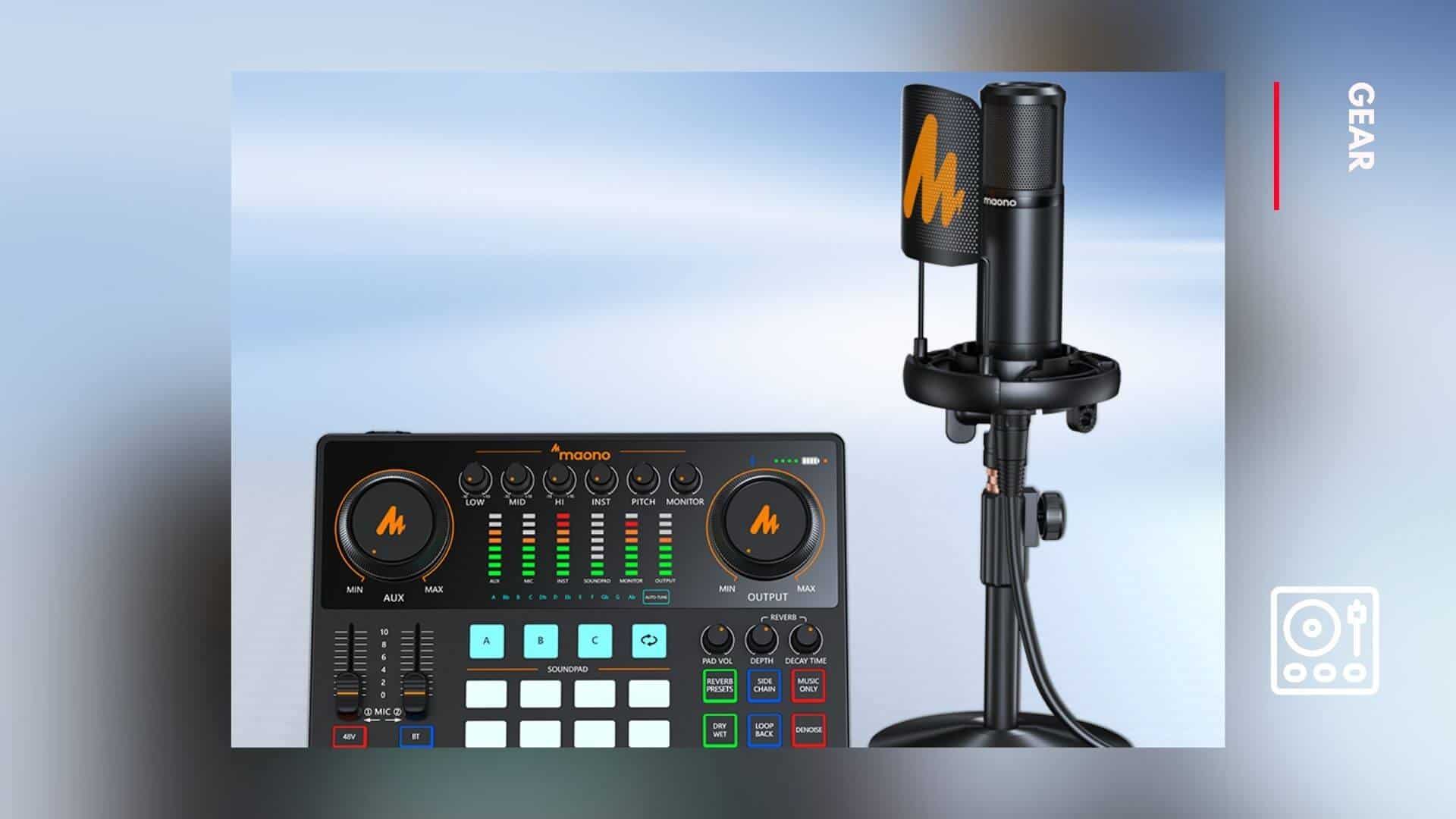 Maono is a rising name in the field of Podcast & Live-streaming market. With a wide variety of products ranging from Microphones, Audio Interfaces, Headphones & Studio accessories, they have built a solid userbase in a very short span of time. Their products are cost-effective and aim to serve the regular needs of podcasters, gamers & YouTubers. They recently launched a new podcast bundle and has been gaining quite some traction in the market catering to which we decided to do an in-depth review of the Maonocaster E2 single mic bundle.

The bundle comes in a Maono branded compact cardboard case. The amount of stuff they have included in such a small-sized package is quite impressive. The bundle includes the Maono E2 audio interface and PM320T microphone and the stand. The accessories that come along include the XLR cable, Pop filter, shock mount, Earphones, and a few more necessary cables.

The sound interface is the core of the E2 bundle and this is where most of the functioning happens. The interface includes an XLR input, Quarter-inch instrument cable input, 3.5 mm mic input, Aux input, Speaker monitor output & 2 headphone jack inputs on the front of the interface. You also get 3 mic settings for your mic inputs that include 40 dB, 50 dB & 60 dB gain options. 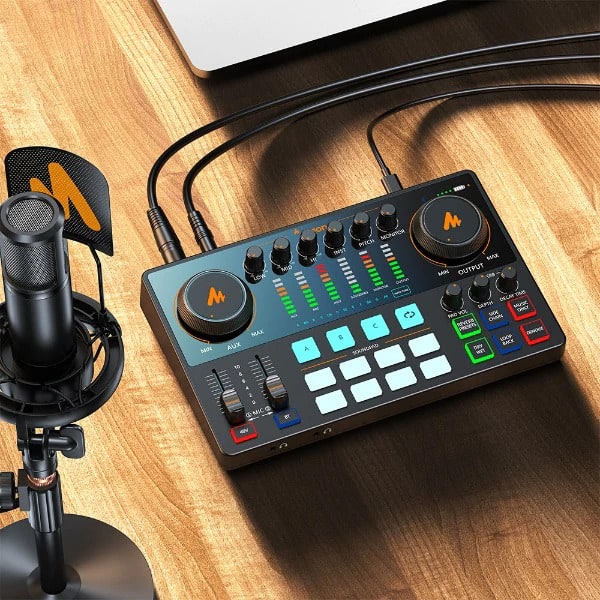 There are 6 knobs present on the E2. 3 EQ knobs, one for instrument volume, one for adjusting pitch, and one for monitoring output volume. The 2 big dials present on either side of the E2 are for the AUX input and the Output volume.

There are 4 buttons present on the interface. 3 of them are used to record up to 1 min long samples and one of them is the loop button for looping these samples. There are 8 more buttons that also record samples but are up to 20 seconds long. These buttons come in quite handy when streaming on platforms such as Twitch where you can loop instrumentals for the intro and also load multiple samples for various effects in the 8 knobs provided below.

The 2 faders on the left are for the 2 mic input levels and the button below is for supplying phantom power to your mics. Maonocaster E2 can also be paired with other devices via Bluetooth. Coming to the right side of the interface, you’ll find 3 knobs that control the Pad Vol, Depth & decay time. The Pad vol as indicated takes care of the volumes of 3+8 buttons present. The depth and the decay time knobs are for the reverb presets. Next to it is the sidechain button which is an extremely useful feature as it ducks the volume of the music playing when you are speaking in the microphone. The music-only button is an interesting one as well as it tries to remove the vocals from the background track. The dry-wet button is for the mic input and outputs just the dry signal when activated. The loopback button records the system sounds with the help of the USB C cable. The denoise button filters out background noise. 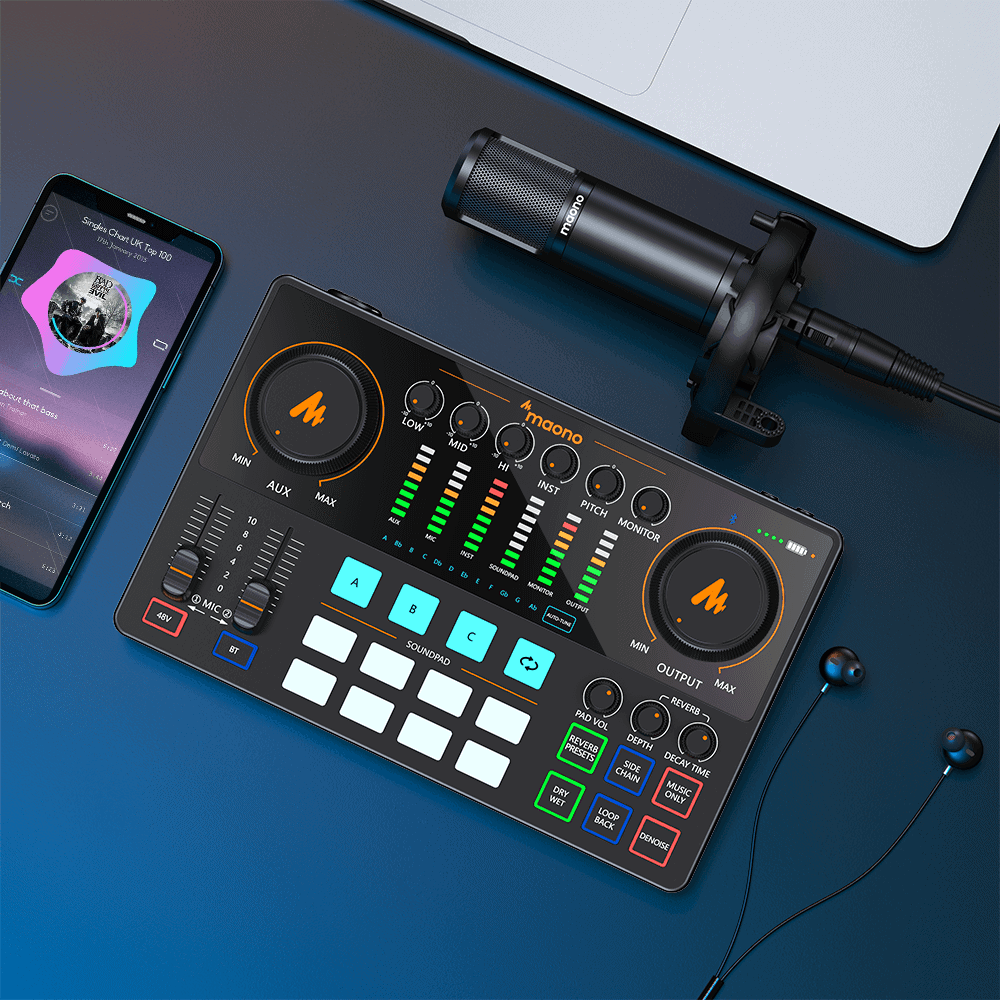 The audio interface also features an autotune button which allows tuning your voice in any of the 12 keys labeled. The feature is quite handy for singers who are live streaming on Twitch or any other social media platform.

The Earphones that come along with it are of decent quality, the mids and the highs are well balanced however it struggles to provide a good bass response. The build quality of the earphones isn’t that great as well. The wires aren’t durable enough to sustain rough handling.

As soon as you plug in the Maonocaster E2 with your system, the sound driver is automatically detected. Once detected you can use any of the audio processing or streaming software such as OBS.

Check out Maonocaster E2 in action in the video down below: