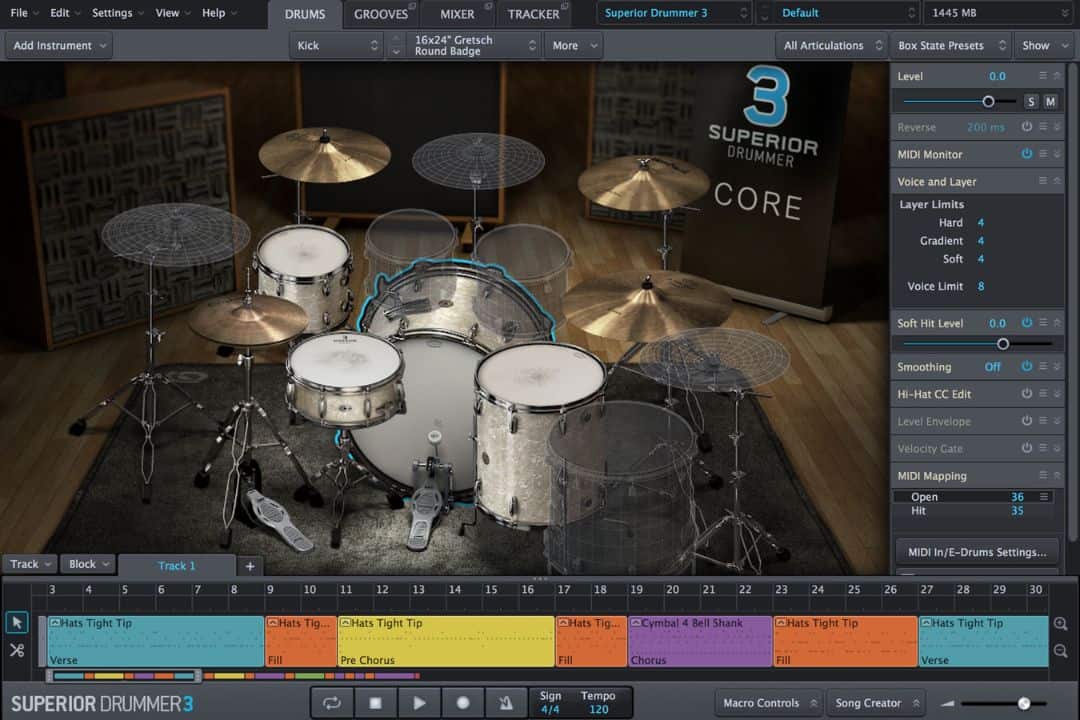 The folks at Toontrack know what musicians want- after all, the company only started because founders Mattias Eklund and Henrik Kjellberg wanted to make great-sounding digital drums for their own projects. That was over twenty years ago, and they’ve spent the time since building a virtual instrument empire, changing the game with releases like EZdrummer and its menagerie of beloved expansions. One of their most noted products, with an insane 235 GB library size, is among the most accomplished plugins in any category: Toontrack Superior Drummer 3.

The third installment in the series, Superior Drummer 3 completely dwarfs its predecessors both in size and scope. The library mentioned above justifies its enormous size with seven different and customizable drum kits, 14 kit configurations, 16 kicks, 25 snares, 32 cymbals, and approximately 350 electronic drum machine-style sounds- and that’s just the actual drums themselves. You can mix and match them together to build your own ideal kit or stack multiples (ex. make a kick sound from several different individual kicks) for rich and distinctive sounds you wouldn’t get from a single drum. The attention to detail is extraordinary for select kits, you can even opt to replace the typical drumsticks with brushes, rods, and felt mallets for added acoustic possibilities.

Engineered by the heroic George Massenburg (whose CV is too big to include here), Superior Drummer 3 was crafted expertly and, in turn, gives you the best tools possible for shaping your sound. Tune, envelope and velocity parameters let you adjust your drum sounds from the source; a powerful 35-effect mixer enables you to sculpt the mix any way you want. The groove grid provides a quick and intuitive way to program, and the astonishing AI-enabled “Tracker” feature permits you to drop your recorded drum audio material and convert it to MIDI. Whether you want to tweak and improve pre-existing sounds or create fascinating new ones, this super software will go as far as your creativity is prepared to take it. The Superior Drummer 3 setup also includes an additional eleven room microphones set up in a surround configuration, for use in anything from stereo all the way up to 11.1 systems.

Toontrack Superior Drummer 3 is available from the official company website– regular purchases (i.e. for those who don’t already own some version of Superior Drummer 2) will be $399, whereas those who are eligible to “crossgrade” will pay $319.

Watch the video below to see the plugin in action!

Next article: Flume shares studio secrets in a Reddit AMA