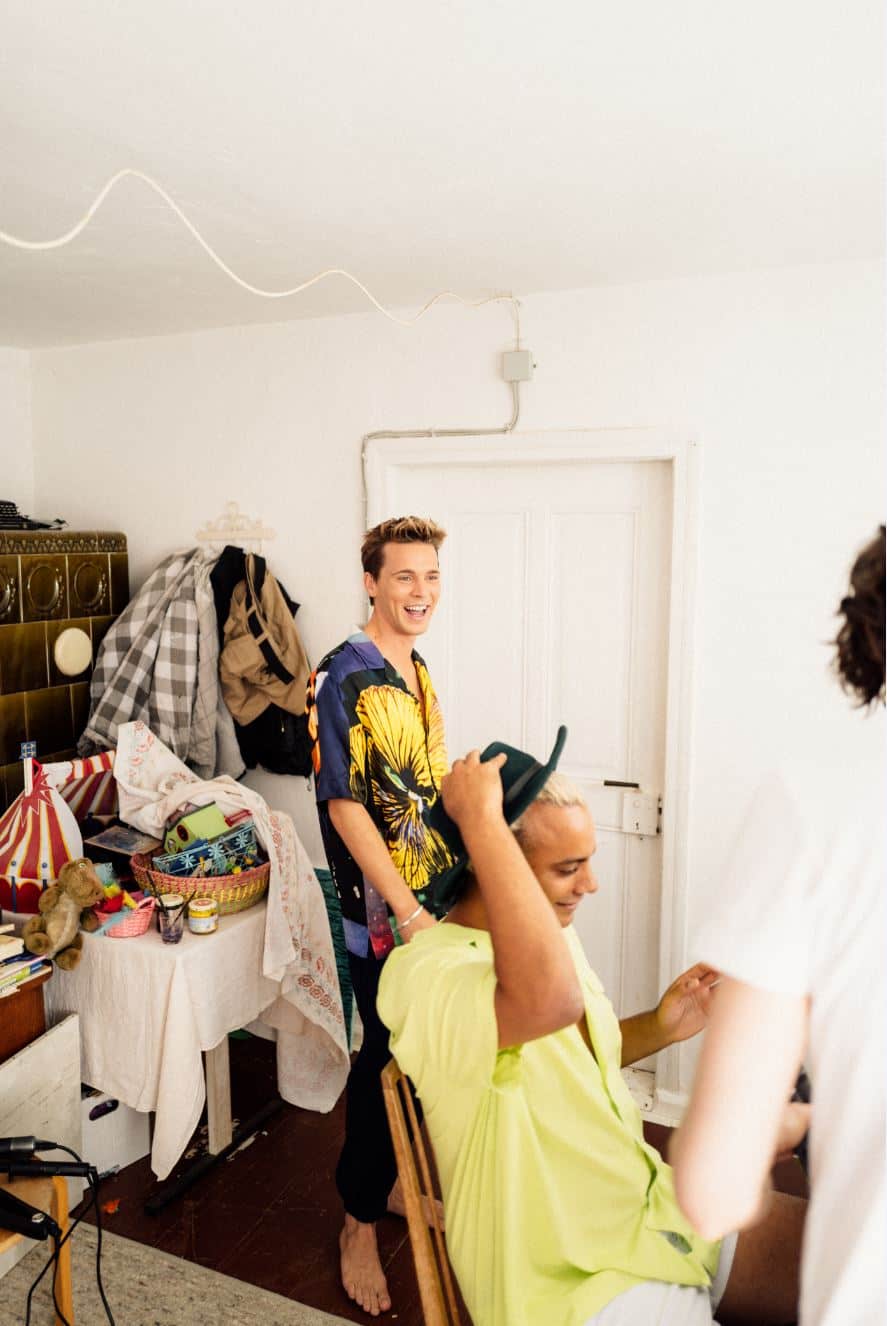 One of Germany’s finest musical exports; Felix Jaehn is unquestionably one of the best young talents in the scene. While earning his stripes with tracks such as ‘Ain’t Nobody (Loves Me Better)’ with Jasmine Thompson and his remix of Omi’s ‘Cheerleader’, Jaehn’s purpose and legacy stem so far beyond that. With more than 2 billion Spotify streams, a plethora of multi-platinum-selling singles and 2, diamond-certified in Germany, his musical talents are irrefutable. However, in this tell-all interview, Felix Jaehn sits down with us to talk about his new single ‘No Therapy’, mindfulness, self-love, meditation and the importance of self-care, and how sometimes, there’s so much more to life!

Hey Felix! Thanks for sitting down with us! How have you been recent? COVID and lockdown have affected everyone in different ways!

I’ve been really well! Luckily, I just came off a break in February. I had an 8-week holiday in December and January, including a 2-week mindfulness retreat at a Buddhist monastery. I was completely in my zone and superconscious, present, and aware of myself and my feelings when lockdown started. I was able to manage it really well because I always try to look at the positive side and being at home for so long clearly had an effect on me as well – spending time with family and friends, having time for myself, and not following a tight schedule all the time. I’ve had time to chill and be creative, and despite the problems and downsides the pandemic has created for the planet and the whole human race, I’ve been able to enjoy it quite a lot.

Did the retreat to the monastery help give you another perspective – to realize there’s a lighter side to this lockdown?

Yeah, definitely, it helped me a lot! Over the past 3 years, I’ve been working on my emotions and myself. A lot of self-reflection and working with my inner-child. I went to Hypno-therapy and started meditating. I’ve been going through so much to figure out myself, my feelings, my emotions and my perspective on life. It’s given me a whole new dimension to consciousness. Not always do I have good days, I have bad days too, but most of the time I’m able to see the good and appreciate what’s around me and be happy.

Your new single; ‘No Therapy’ is finally out! While the sound design is rather dark and sombre, the message behind it isn’t. Tell us a bit about how the song came together!

It stems from having gone to therapy, and now I’ve realized I can leave it behind, so the message is along the lines of “we don’t need no therapy”! I encourage anyone who feels sad and down, and needs help, to get it because it’s so important. Mental is such a big, big issue at the moment and people shouldn’t shy away from it – it should just be accepted! It’s something completely normal that everybody, more or less, has to go through at some point. This song is about feeling good, enjoying the present moment and loving each other! Also, it’s about self-expression and being who we want to be. About 2 ½ years ago, I came out as bisexual and having not come out when I was growing up or even during my first years of touring the world, this wasn’t public – this has always been in my head. I keep addressing it because it’s so important for this to be seen as normal as well. The end of therapy was also about being with people you love and I realized that most of the time, if not, all of the time, whenever I have a problem or I’m anxious, it’s all in my own head. Sometimes, you need a moment to just get out of your head!

This isn’t the first time you’ve worked with Nea and Bryn Christopher. How did it feel to have them back in the studio with you?

It was amazing because I worked with Nea when I did a remix of her song ‘Some Say’. I did a writing session with her about 2 years ago, so when we put out that remix and had press photoshoots, we thought “wow, this feels good! Let’s collab!”. So I invited her and some of the co-writers from ‘Some Say’ to my home, where we wrote songs for days and we just brought the dream team back together! That’s where we wrote ‘No Therapy’! I actually had my next singer lined-up as well, but 3 days after the writing camp, we went into lockdown, so it made me change my perspective on what I want to release because I had some more serious songs lined-up, but then I thought “maybe that’s not what people want right now!

In another social media post, you also touched on the topic of meditation, self-love and mental health. How important are these things, to you?

It’s so important because everything I’m doing is based on that, and as I said earlier, everything I experience, feel, see and hear, is all in my head, so the way I see things is totally based on my level of consciousness presence. So, by meditating every day, I’ve managed to maintain this mindful state and I’ve managed to live in the present moment. So, because I do that, everything that I do feels like a different experience and I really don’t want to miss that anymore. Sometimes I’ll miss a day of meditation because I’m tired, or something distracts me and then I don’t manage to keep up my routine. I then immediately notice I feel less present during the day and I don’t like it, so it’s so important to me. It came together with many changes. I switched to a vegan diet, I’ve stopped drinking alcohol, I’m avoiding industrious sugars and it’s all come together to be a complete lifestyle switch. I feel that it’s just so important that we take care of our bodies and minds!

A few weeks ago, you highlighted your two Diamond-certified singles in Germany. How does it feel to have your work validated with such monumental achievements?

I think I’m the youngest artist in history to ever achieve that? It’s crazy! Although, it’s a bit crazy to be honest because I don’t really care about those awards and certifications too much. I feel that my happiness and my worth is not based on success, but of course, on the other hand, it’s so nice to see that so many people listen to my music. I just think, diamond-certification in Germany is 1 million downloads, so I try to visualize all these people that have been listening to my tracks and it’s funny. I just try to spread good vibes and positivity and clearly people are feeling it, so that’s a beautiful thing.

It opened up all of the doors at the start of my career, pretty much. Before it, I was playing a few shows, a few smaller gigs. I’d been around a bit, but then suddenly, the remix just exploded and went to #1 in 55 countries! It’s just surreal, it really opened up all of the doors and just put me on the map, globally. To be honest, thinking about this now, it came with some upsides and downsides, because, when starting from 0 and explode so quickly, there were so many times where I just felt so much pressure and it was just too much for me. I remember when I did an Australian tour, I was in Australia for 4 days where I did 3 shows, 2 whole press dates with a 10-hour time difference! I was just sitting in my hotel room and I couldn’t think anymore because I was so tired and I had to play another show! I didn’t know how to handle all this success and demand, so I had to say no, and manage my schedule better. However, overall, I’m super grateful for it because, essentially, we wouldn’t be talking now if it weren’t for that success.

Looking as far back as ‘Shine’ in 2014, to now, how would you say your music has evolved?

Oh yeah, it has evolved a lot! I’ve also been experimenting so much and been trying so many different things. The song ‘Cool’ with Marc E. Bassy and Gucci Mane, for example, was only 95bpm, it wasn’t even an EDM tempo! So I’ve been trying so many different things and I really enjoyed it, but I also feel like I needed time to just explore what else I could do as a producer – as an artist. I say this because ‘Cheerleader’ and all its success and ‘Ain’t Nobody’ only happened a few years after I even started producing music and I didn’t want to only focus on going in one direction, I didn’t want to just make tropical house. I wanted to just go with the flow and the vibe. With the live streams I’ve been doing at home, I’ve realized I want to delve more into house, now. In my live streams, I couldn’t even play some of my own songs. Even at my shows! They were too slow or too pop-oriented and I thought this felt wrong – I wanted to play my own records! That’s also why ‘No Therapy’ has this new sound, because I wanted to dive back into the club world and have songs that people like listening to at parties, rather than at the beach or somewhere more chilled-out.

What do you hope to achieve during the remainder of 2020?

Music-wise, I want to finish my album I’ve been working on. Currently, I’m looking at doing a 20-track double-album which consists of two parts. One part tells my story about mental health, finding myself and the transformation from being emotionally sick to living happily in the present moment, but I wanted to add 10 more tracks that could be anything. I was also in all the writing sessions, locked into that concept, so I was only writing songs that fit in line with what I wanted to say, but of course, when doing songwriting sessions, every day has a different vibe. Sometimes we ended up making songs that didn’t fit the concept but I still loved them so much! So I decided to do an A/B type idea, for all the songs that didn’t fit the concept, but wanted to release anyway. So I want to finish that and release it next year but I also have a show coming up in September! I’m super excited about it! I’m playing a concert in front of 900 people in Berlin! They [the organizers] managed to come up with a concept where 2-4 people have their own area so social distancing can be maintained, while still dancing and enjoying themselves! It’s going to be super nice to have a proper-open air gig again! I’m also using this year to focus on my private life and do all the things I haven’t been able to, in the past, because I was always caught up in touring and working all the time! I’m spending lots of time with family and friends, I’m also going on a sailing trip for a couple of days for my birthday! I’m still trying to meditate every day to maintain this mindset. I also want to date more and find love & happiness! I’m just grateful to have time right now because it‘s been so scarce over the last 5 years and now I’ve got all this time and it’s so cool! I can use it to do fun stuff!

Be sure to listen to ‘No Therapy’ from Felix Jaehn, below!