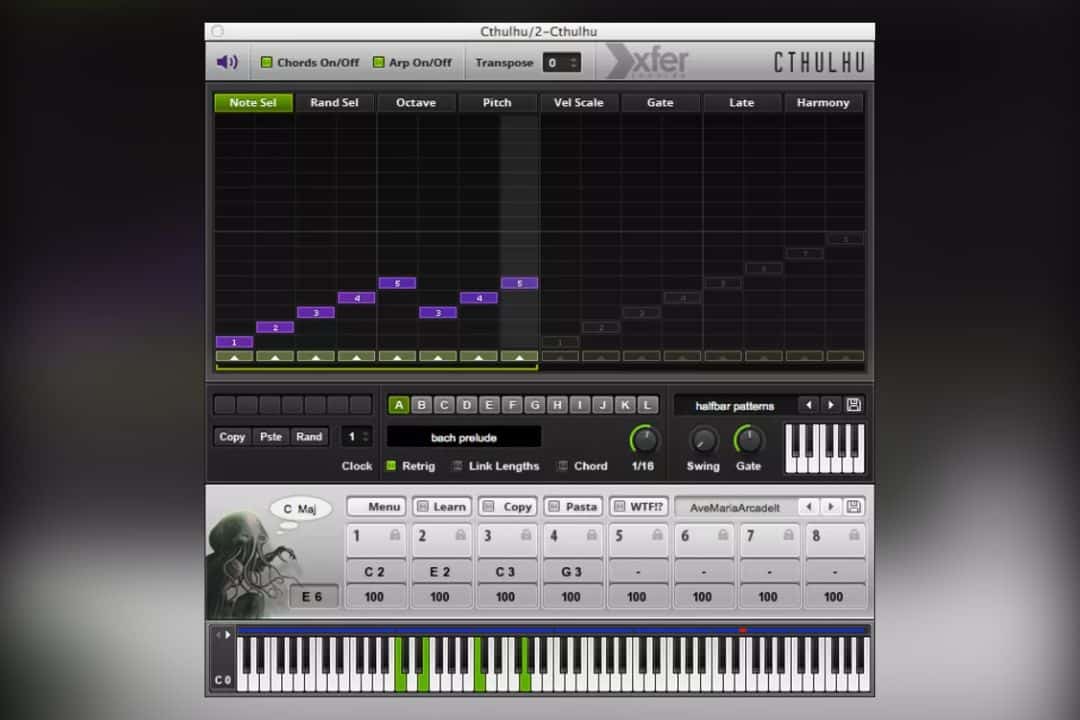 MIDI generation plugins are a great and helpful tool for producers and musicians. Not only if you are stuck while producing but also when you want to try out some new grooves and rhythms in your productions. The great advantage is that most plugins and software are easy to handle and just in some steps you can create staggering midis. We created a list with 10 of the best MIDI generator out there to help you.

Audiocypher is a great tool for finding inspiration and creating melodies. Not only producers but also musicians and people who just want to have some fun. It’s an extension for Mac and Windows and also has an App. MIDI files are generated through writing in this plugin, and you can easily change the root key and scale in the plugin’s interface. Now available for 22 dollars.

Xfer is a renowned brand in the music community thanks to some remarkable plugins such as the OTT compressor and Serum. But there is more in their catalog of products. Cthulhu is a staggering MIDI generator plugin. First and foremost it’s a chord memorizer and player, but producers can experiment with the features of Cthulhu to make great things. The second module is the Arp section where users can generate some creative arps & melodies. Experiment with it and see its potential. Available for 39 dollars.

Scaler 2 is the perfect tool for producers who aren’t comfortable with music theory. It is designed to detect, explore, create and perform; through its simple interface. With over 600 chord sets used by famous producers such as Carl Cox, MJ Cole and more, Scaler 2 is an endless source of inspiration. MIDI files and chords can also be exported into your DAW. Available now for 60 Euros

Forager is an amazing tool to make good chord progressions even when you are out of inspiration. You can simply choose chords and change notes to create something within a minute. With the randomization feature, Forager can create MIDI for you. In addition, you can export the whole chord progressions and save them as MIDI files. Now available for 49 dollars.

27+ Music Genres, 96000+ Chord Progressions, 120+ Pianistic Styles, and 250+ Build In Instruments. Does this sound good? Mixed in Key is since a long time a great company that makes life easier for producers and musicians. Great then this plugin is something for you. In this plugin, producers can simply pick a key and start to drop chord progressions. With the inbuild Rhythm tap, you can adjust the groove of your placed chord. Afterward, the producer has the chance to export it via Midi or to render the audio file. Just simple and great for every producer.

Instachord is made to perceive a fast and good workflow. One can easily make synth arpeggios, chord progressions, and guitar riffs with Instachords. The scale and key can be applied on the left side of the plugin and the right side is the adjustment window. In addition, W.A. Production added an AI Generator which will generate and create riffs out of any chord progression that exists. Now available for $89.

Chordprism is a rather simple but highly effective MIDI generation plugin. In the interface itself, producers can work with a chord generator, a smart scale, step sequencers, multi-arps, instance sync, and a multi-instrument performance tool. Everything in this plugin is set to help producers to make the best chords possible. After creating the chords, users can export them via midi and even change the key and scale with the Key / Chord shifters. Now available for 59.99 dollars

Chordpotion comes with a different approach to generating MIDI. If you already wrote a chord progression, Chordpotion generates staggering and captivating melodies with your chord progression. After importing the MIDI file to Chordpotion, producers can combine different playing styles and piano modes to generate the next intuitive melody for your song. By using the preset and the rhythm changer, the working mode will be even simpler for you. Now available for $49.

Audiomodern is a relatively new company in the audio community but they have plenty of great plugins and tools for producers. With Riffer producers have a creative MIDI sequencer that generates chords, melodies, and riffs with variables such as pitch, duration, velocity & density. It’s built to be used for software and hardware outputs and has plenty of extra features such as 53 Scales (Western to Eastern), saving space for own scales, quick transpose, & a shuffle and shift mode.

Read next: iZotope unveils the new RX 10 and Ozone 10