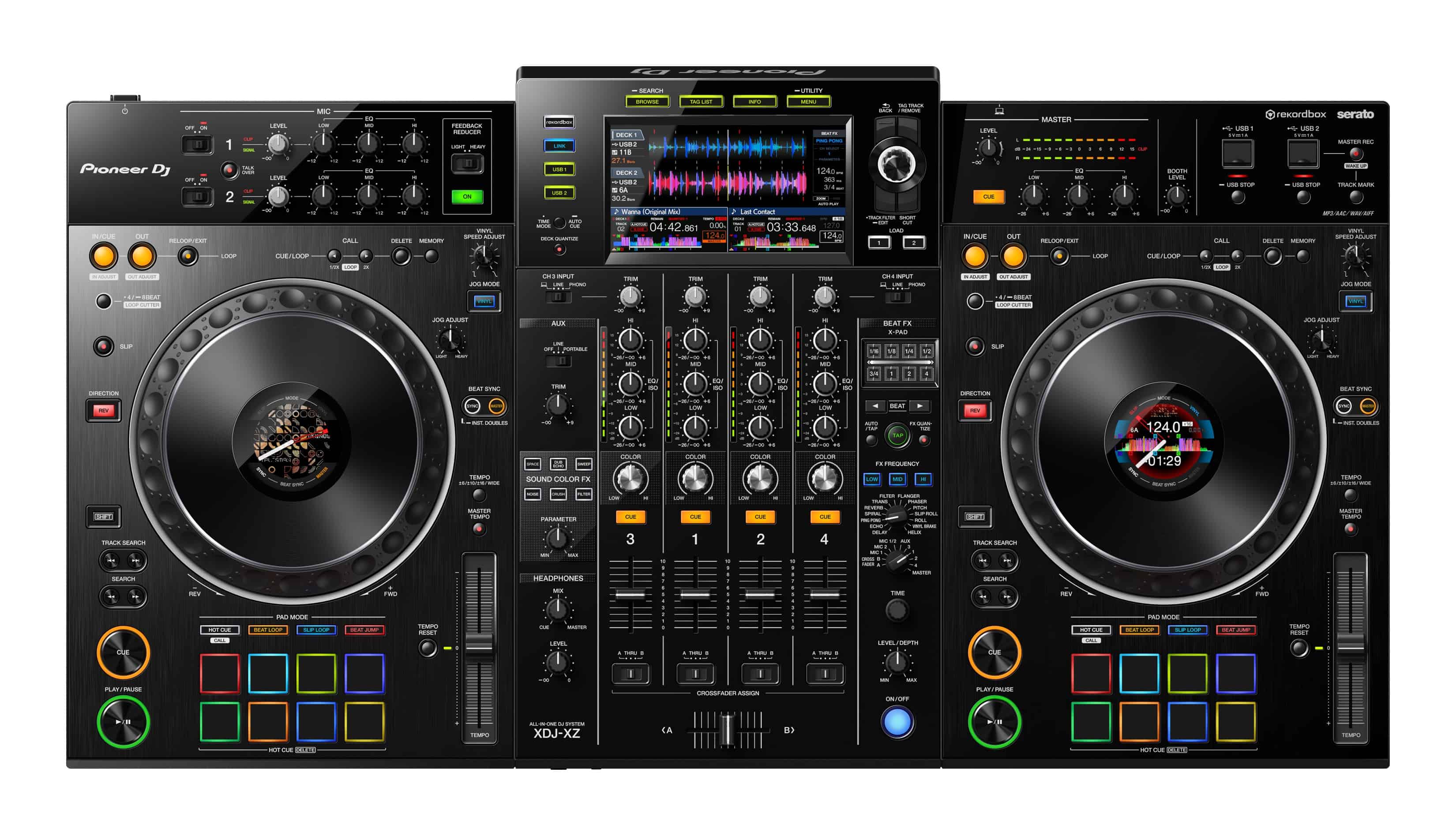 Pioneer have been busy affirming their status as queens of the DJ tech market these past few months, and now we’ve had yet another massive addition to their range in the shape of the XDJ-XZ. Admittedly the Pioneer lineup can be somewhat confusing, between CDJs, mixers, control units for software, and so on. The XDJ systems are their “all-in-one” controllers, that combine two CDJ-style deck controllers, and a central mixer section. However, unlike their DDJ range of controllers, they don’t require a laptop to run, with built-in software and a nice big LCD screen that mimics the Reckordbox system you get on a CDJ200NXS.

So what you get XDJ-XZ? Essentially it’s two CDJ2000NKX2s with a DJM900NXS2 planted in the middle. You get full NXS2 jog-wheels, with the addition of a nice LCD screen, similar to the high-end DDJ controller models, that provide information about the track playing, from artwork, to waveform, to BPM and time-remaining. You get mostly the same buttons as an NXS2 as well, though a minor difference is the play and cue buttons along with a few other bits are more like those found on the slightly lower-end CDJ900. In addition, you get 8 “performance pads” that most DJs will likely use in a similar way to the hot-cue buttons on the CDJs, but with extra functionality on the pads leaning more to “live performance” such as beat and slip loops – a clear nod to the new range of professional Denon units that have been threatening to upset the status-quo.

Mixer-wise, the XDJ-XZ is a similar story. There’s nothing really missing that you’d get on a DJM900NXS2, and there’s even an added master EQ. Full 4-channels, with 3-band EQ, full colour and beat FX, and a dual mic input section. Speaking of which – the mic section sits above deck A, with the added bonus of 3 rather than 2-band EQ on each, while the master sections sits above deck B. Above the mixer is the Rekordbox control section, similar to the one you’d find at the top of a CDJ2000NXS2 unit, complete with full touchscreen functionality. There are some odd omissions – there may be 4-channels on the mixer, but you only get two decks. Of course, a unit with 4 physical decks would be rather cumbersome and expensive, but many previous Pioneer controllers have a “Deck 1/3” and “Deck 2/4” button on each side, allowing four “virtual” decks to be used. Channels 3 and 4 aren’t wasted of course – each have a full line, phono, and Link input allowing you to connect anything and everything, with full Link capability with compatible CDJ units. There’s a nice chunky master output section offering and phono, though there isn’t a separate control for each, but there is an independent booth output on jacks.

Software wise you can organise your tunes on Rekordbox and just plug a USB straight in via two top-mounted ports, similar to a CDJ. Or you can link up a laptop and run the included Rekordbox DJ or Serato DJ Pro via a back-mounted USB port. There’s even support for Serato DVS and Reckorbox DVS if you have paid for the upgraded software. There’s no HID support for Traktor, though someone will no doubt make a third-party mapping, but in a first, there is now support for Virtual DJ, with their own style of waveforms supported by the main LCD screen. While often viewed as a lower-end software, many stick by it somewhat religiously, so this will surely boost sales to that market.

So who is this aimed at? Unlike the DDJ-V10 we recently reviewed, this doesn’t seem to be aimed squarely at pros with deep-pockets and solid brand-loyalty. Instead, the XDJ-XZ is a unit that will appeal to up-and-coming professionals who want to learn the industry-standard CDJ and DJM setup without having to shell out several thousand. In short, anyone familiar with this system and associated Rekordbox software, will be able to transition to a CDJ/DJM club-setup with no issues whatsoever. The lack of 4-deck support is disappointing in this respect, but only for those who use three or four decks, and retailing at around $2,300/£1,900, it’s a small price to pay for what is an extremely powerful unit that gets you more than used to playing a “pro” club setup.