It’s the most wonderful time of the year: Spotify Wrapped is out! The ever-popular feature has been a hit ever since its inception, and it allows users to view such statistics as their top artist, top tracks, top genres, number of hours of music listened to, how many artists listened to, etc. The perfect summation for the year, they’ve now rolled out the 2020 version and artists are beginning to upload their impressive stats for their fans to see. Without further ado, let’s dive into some of them.

Blows us away seeing our music connect like this… Incredible numbers once again. Thank you very much for the support both on @Spotify & the new Album. #Class ♥️👌🏼 pic.twitter.com/AVSVIWKc10

Incredible figures from the Liverpool duo, the 179.5 million streams are largely because of their debut album ‘Dark Matter’ which came out a few months ago. Even without that, though, we have no doubts that their numbers would’ve been just as high anyway.

WOW 🤯 2020 has been rough but I know for me and so many of you that music has been something that has helped us all through these really uncertain times. Thank you so much for all your support this year 💙#SpotifyWrapped #2020wrapped #2020artistwrapped pic.twitter.com/qr3N8OP6f2

With many naming him as their top artist of 2020, Jonas Blue proved that he made 2020 his with nearly one billion total streams. Sure to hit the billion mark next year, this proved that his fanbase is as strong as ever, and his mark in the music world is permanent. 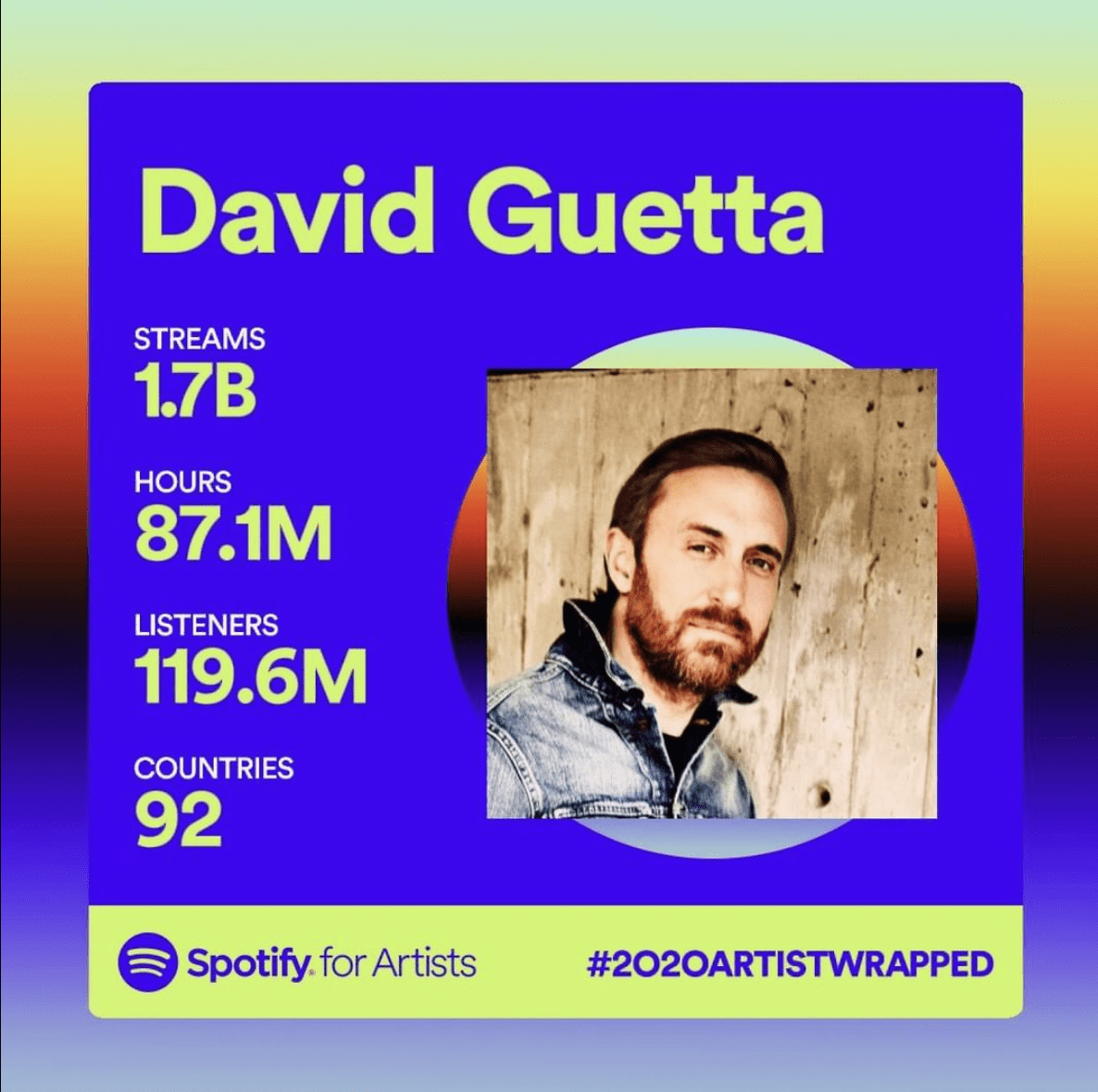 No surprise from the current number one DJ in the world, but David Guetta crossed the billion mark this year. 2020 marked the year where he pushed boundaries with music, and his string of singles and EP with MORTEN definitely helped these streaming numbers.

He’s been in the billions since at least 2018, and his numbers keep climbing every single year. As Alan Walker celebrates the 5th anniversary of his track ‘Faded’, he also celebrates these incredible figures. 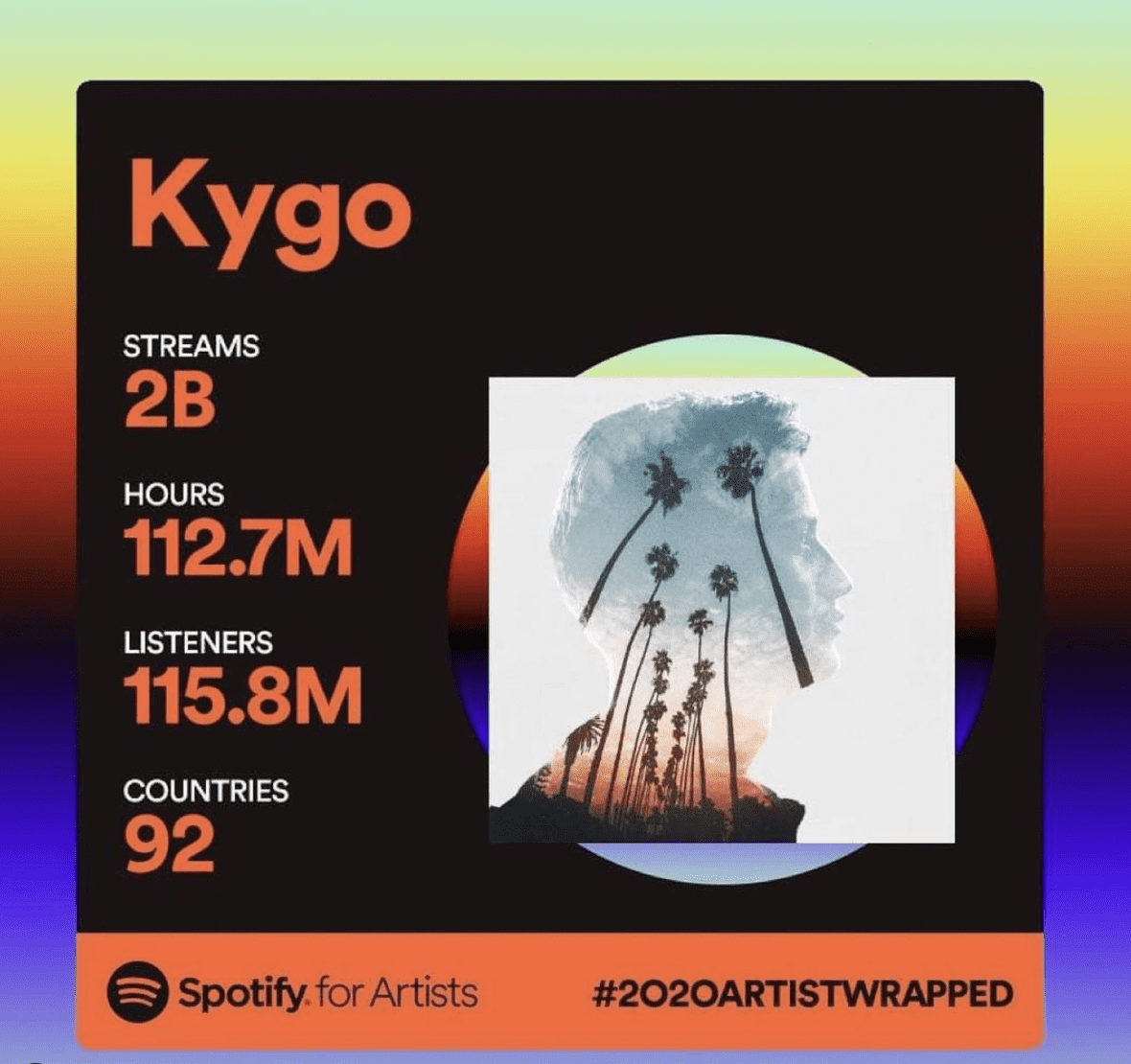 Coming in at 2 billion streams, it’s no surprise that Kygo reached that number, as his album ‘Golden Hour’ came out this year and was largely popular.

Big up nuff respect to everyone who has showed us pure love, especially during these times. Thank you all so much pic.twitter.com/OfmktNDGcu

Just missing out on that billion mark, Major Lazer proved that they’re still as popular as ever with the release of their latest album ‘Music Is The Weapon’. With a billion streams sure to come next year or some time soon, the group had 101.1 million people listening to their music just on Spotify this year.

Constantly pushing the boundaries of electronic music, Steve Aoki had a great year. Multiple singles and a new album boosted these streaming figures by a lot, and the numbers will only go higher and higher in the next years.

With the support of his Ateam (his fans), afrojack gained 268.9 million streams across 39.2 million listeners.

Proud! Much 🖤 to all you 27.6M listeners out there! pic.twitter.com/PX6UBJXwGf

What a year it has been for Nicky Romero, and his streaming numbers reflect that. High into the millions, people across 92 countries spent nearly 10 million minutes listening to his music this year.

Thanks to each and every one of you for the support this year! Love you all 😊🙏♥️ @Spotify pic.twitter.com/NPaETf7Uk5

Over a quarter of a million listeners makes sense when you think about just how many hits Oliver Heldens banged out this year. It’s been an incredible year musically for him.

934 million streams and 38.2 million hours that's insane🔥🔥 thanks to you if you were one of those 86 million listeners drop a comment ❤️🙏🏼 pic.twitter.com/DcSYqQWqKN

R3HAB recently earned the title as Spotify’s most discovered artist on their Discover Weekly feature, and with these streaming numbers we’re definitely not surprised at all. Nearing the billion club, it’s been a massive year of releases for him.

The internet 🕹️📡 Blows our minds 🤯🤯 60 MILLION streams 🤯🤯 All our dreams coming true! 🎶🔊🥳🥰 Thank you @spotify and thank you to our streamers 🎵💥❤️🙇‍♀️🙇‍♀️ #NERVOnationforeverrr pic.twitter.com/BWWlFpzhLA

The NERVO Nation came out in full force this year to gain the sisters their nearly 60 million streams.