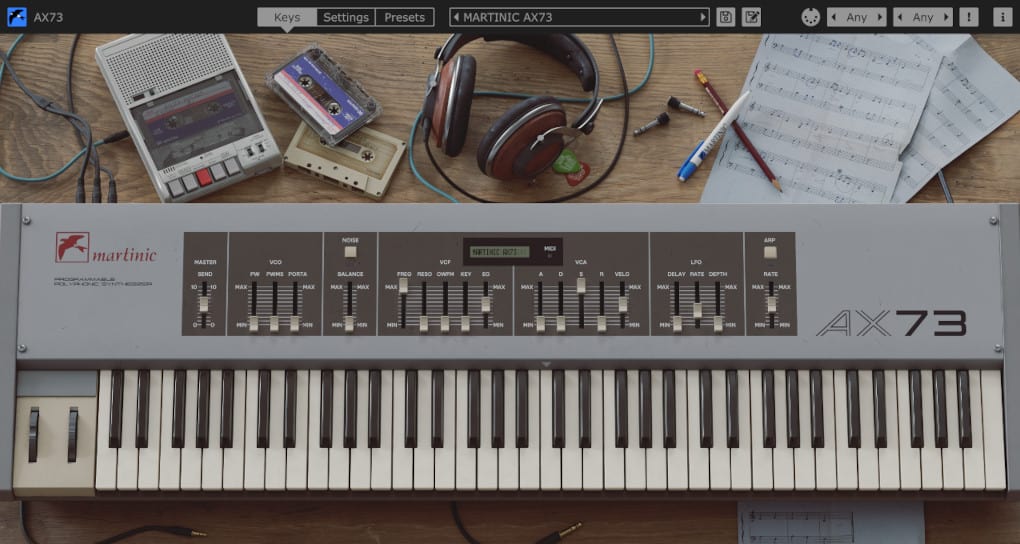 If you’re not already familiar with Martinic and its products, you’ve been missing out. They’ve been making software instruments and effects out of Schagen, The Netherlands since 2010, and with offerings like the quirky and cool Elka Panther and thumping free Kee Bass, they’ve quietly established themselves as a force to be reckoned with in the plugin industry. Their most recent release, the Martinic AX73, is flexible and dynamic enough to convert any non-believer.

Based on the 1986 synth of the same name, Martinic’s recreation of the AX73 brings the original’s distinctive analog sound and feel to the digital age in style. It’s a meticulously and faithfully crafted emulation of an instrument that, like the company itself, deserves more recognition. It comes packed with four analog oscillators, two synth layers, unique modulation options, extended performance parameters, an eight-module effect section, and a staggering 600+ built-in presets. Staying true to their M.O. of refreshing and upgrading the original tech, Martinic has added a slick new interface, multiple views for easier navigation and customization, and eight built-in effects (compressor, phaser, flanger, chorus, delay, reverb, distortion, and EQ), an arpeggiator, and much, much more.

The Martinic AX73 is available on the official Martinic website for $119. It comes with two free preset collections: the AX73 legacy collection, which, as the name suggests, consists of some factory presets from the original, and the Doctor Mix collection, designed by the popular synth and music production YouTuber. If you’re not quite ready to purchase, the company does offer a free trial for use in non-published work- the AX73 will run, but with white noise added to the output signal. Check out the video below to see this amazing synth in action before you get your hands on it!